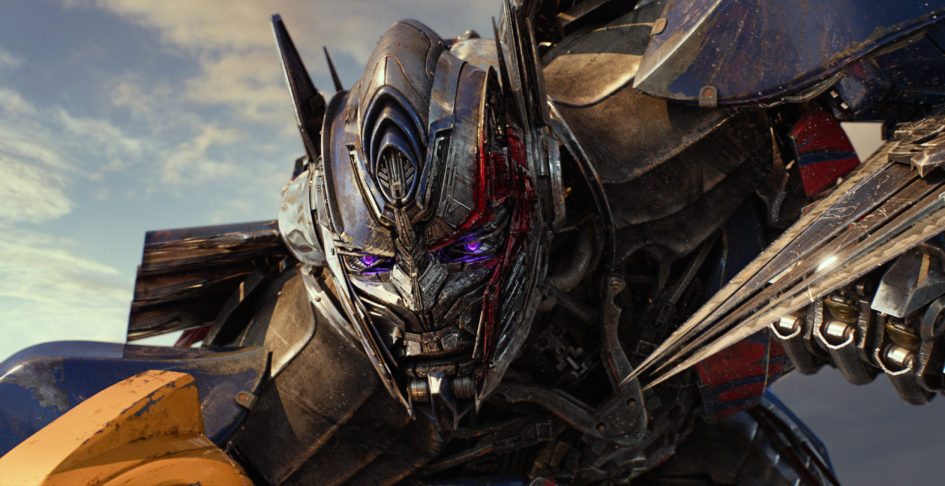 Optimus Prime in TRANSFORMERS: THE LAST KNIGHT, from Paramount Pictures.

I’m a pretty forgiving Transformers fan. I’ve been able to enjoy the Michael Bay films for what they are. That is to say that what they are could generally be described as a film-tech circle-jerk following a Cliffs Notes version of the Transformers lore. You could almost tell what was to transpire in any of the previous installments from the trailers. That’s no longer the case, which leaves me and many other fans scratching our heads with no idea what’s going on. Tonight, I’m heading out to see the film and hopefully learn, finally, what the hell this movie is about.

That’s about what it’s like in my brain when I watch the trailers. Now, the latest one has shed even more light on the likely story, but still — it doesn’t exactly make anything make sense or hold any context. Hell, even the trailers for the new Pirates of the Caribbean film, returning the franchise to relevance after six years of nothing, was more indicative of where the hell we left off and where we’re picking up.

I’m no Bay-formers basher. I do not hate these films. I’ll say they have some great moments alongside their normal load of plenty to cringe at. They have not been known for a cohesive story, and they’ve been just plain filthy with missed opportunities, but there are plenty of wins, as well. For instance, the Internet lit up with haterade when the design for Optimus Prime was initially revealed, but it has settled into somewhat of a comfort zone for most folks, and even widely accepted over time. That design is an excellent example of what the Bay-verse of bots has done: combine a 30,000-mile view of things with a rough concept of character and do whatever is necessary to market and get butts in seats. (Come on, you can’t tell me that’s not a mashup of Optimus and Rodimus Prime, rolled in with a little red-blooded American passion for trucker culture and phallic vehicle projection.)

This latest Prime-driven story, though, is only barely starting to come together.  We know Prime sailed off into space at the end of the last film to seek out his creators. We really don’t have a good reason why, but if we’re subscribing to the previous lore of our existing series knowledge, we suspect some of the same seeds of story to be represented. It would seem from the trailer that he finds these creators and is either co-opted into doing their will, or we are being led on a wild ruse using a Nemesis Prime or similar stand-in as a tease to the bad-guy Prime scenes that we are being given glimpses of. The trailer show us snippets of dialogue that may or may not actually match the scenes they’re being played with, in which Prime indicates that his world will die unless ours dies first. This could be his own words, this could be his summary of what the alien/creator wants, or it could be the words of a completely different character, i.e. Nemesis Prime. It would appear in any case then we should come prepared to see Optimus Prime whipping ass like so many of us have come to enjoy seeing in these films. Beyond that, we don’t have a lot of substance to go on.

Megatron, usually the biggest missed opportunity of the whole franchise, is back, and looking way too… Predator. No, really. Check it out.

See? I mean, someone needs to check on what Mamatron was doing with the mailman, and if that mailman can be easily seen against a jungle backdrop at night.

His storyline (just saying that word is almost laughable) has been the least consistent. Ultimately, the central evildoer of the entire lower has been reduced to somewhat of a living breathing problems. The Bay films missed the opportunity to revive Prime from the bottom of the ocean subservient to a higher power under the new guise of Galvatron. There iteration of Galvatron was essentially a glorified RC car toy for a bunch of humans who were playing with tech they had no business touching. Now Megatron is back, and we can only hope for a decent explanation as to why he is, but one can assume he was never gone, just had his mind borrowed for the Galvatron Power Wheels Experience™.

Megs’ jacked-up kisser is not the only design concern this new film is bringing into focus. The current line of toys for the movie highlights an issue that’s been plaguing the Bay Transformers line from the very beginning: they’ve been clumsy toys that are unstable and overly complicated in all the wrong ways from the beginning, and when made more practical, they’ve lost most of their charm. There are some decent wins among the line this time, when you observe them in their annoying Hasbro airbrush stock photos (which never — ever — show you what the toy really looks like and should be illegal), but some of the models are just downright inexplicably laughable. 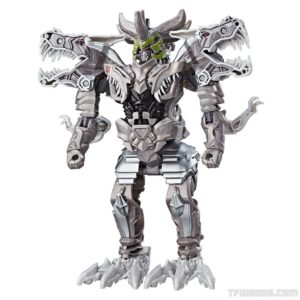 At the price these are selling for now, I’ll take my money to the other, more compelling, and more nostalgic lines being offered. The most insulting aspect to the toys is how they seem to be Bay-proof. The movies are so frequently known for using the envelope of visuals, for better or worse, but the toys seem to err on the side of worse, every time. Bay is either not involved, or he has forgotten what it’s like to be a kid. They’re not loyal to the films in most ways, and usually come out ugly. Or they just seem like endless lines of re-paints from the same old Optimus designs, year after year. (Another potential Bay mis-reading of the genre.)

The tech of the movies is another huge question mark, juxtaposed against all the timeframes in which it seems to be now spanning (from prehistoric to medieval to modern). Judging by trailers, we will see various iterations of the Cybetronian technology driving our heroes and villains, and possibly some new spins on it. Old spins, too, as some transformation sequences seem to definitely be of the recycled CGI variety. The giant planet-killer (or whatever) is clearly a form of tech, so are the small bots, as well as the dragon (or whatever) and the dinos and old war machines. Will we get some indication of the ways this tech has interfaced and integrated with that of its respective time? It looks like there might be potential here for an anachronistic train-wreck.

Yes, I am still very much looking forward to this film. In fact, I’m planning to enjoy it, even with the almost certain rough edges. The levity in being cautious and preparing oneself for the pitfalls can actually help temper those anticipations, so let’s all take the trailers as a somewhat disorganized sample buffet, and see where the actual film takes us.

Time to roll out!