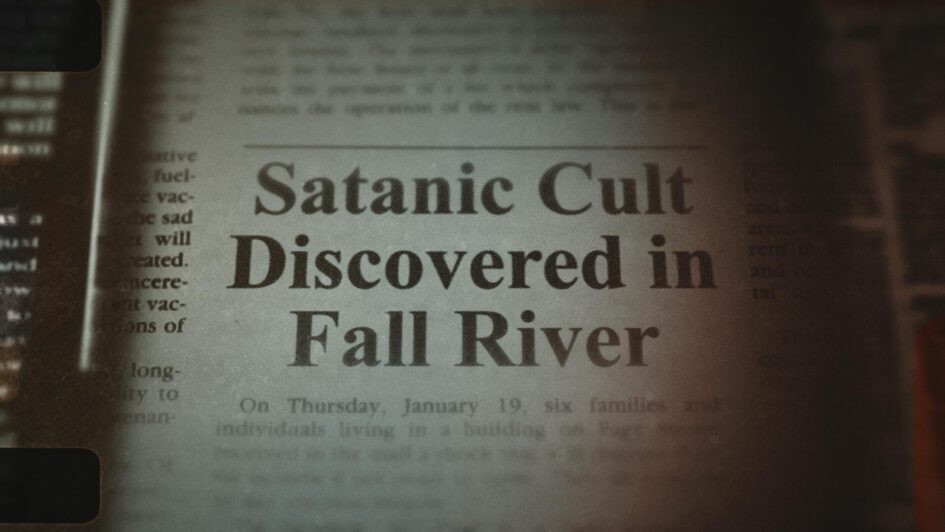 Per Matt
From the introductory warning stating this program includes graphic depictions of rape, torture, murder, abuse, drug use, animal cruelty and offensive language, I immediately knew I was immersing myself with something sinister. To advise viewer discretion is stating it mildly.

For 21 years now, Blumhouse Productions has been the go-to house of horrors, producing and releasing an astounding number of dark genre-themed films and television shows, but none of them have featured the grisly brutality and pain associated with watching the details unfold around a trio of real-life homicides in the newly released EPIX documentary series, Fall River.

Located one hour outside Boston, MA, Fall River has had a horrid history. More than 100 years ago, the Lizzie Borden axe murders shook the nation, taking place within the city. And more than 40 years later, three ritualistic killings also happened there. Unfortunately, doubt has been cast toward both outcomes, and this four-part documentary series examines the Fall River murders, which took place between 1979 and 1980.

Previously unanswered questions are brought up by former state troopers, detectives, crime reporters and attorneys who worked these cases, offering the possibility that justice remains for the deaths of three women. If that doesn’t grab your attention and get your blood boiling, seeing the archive footage surely will.

“Fall River does more than chronicle the sensational murders that beset this town, but gives a face and voice to the marginalized victims, women who, because they were sex workers, did not receive the care and attention warranted during the investigation into their deaths,” said Mary Lisio, EVP Alternative and Non-Scripted Programming, Blumhouse Television. “Over the course of filming, we uncovered aspects of the investigation that were previously unknown, new evidence, that 41 years later bring us closer to the truth of what really happened to these women.”

This series seems tailor-made for fans of true-crime podcasts who enjoy deep dives into complex cases. As each layer of the story is unpeeled, the more gruesome it gets. Life was much different back then. In a gritty neighborhood, illegal drugs and prostitution were big problems, openly taking place just blocks away from a local police station. Links are made between a violent pimp, a street walker and her girlfriend. Satanism is brought into their lives as a means of control, and the ritualistic killings within a nearby wooded area kicked off the hunt for some real-life monsters.

The level of pure evil on display here is horrendous, often being a torture to watch through a combination of oral history and dramatic reenactments. It seems to be no coincidence that these events all took place around the same time of Charles Manson and the Helter Skelter murders. And then Anton Lavey, founder of The Church of Satan, appears and things get really spooky. To say this documentary series is scarier than anything fictional Blumhouse has ever released would be absolutely true.

By the conclusion of the series premiere, “My Soul to Keep,” Executive Producer/Director James Buddy Day poses a parallel theory: What if the events of this entire storyline were never really neatly tied together? What happened to these three women is truly horrible and to even think that the person who’s been locked away for more than 40 years didn’t do it would be an injustice without any real evidence. Was Carl Drew given a lifetime sentence without parole for a crime he didn’t commit? The official verdict receives doubts, which will surely get explored in the remaining episodes.

I’m thrilled that EPIX has chosen to become the destination for serious documentaries, which include PUNK, By Whatever Means Necessary, Helter Skelter: An American Myth and now, Fall River. I really like the pairing of the network with Blumhouse Television and hope there will be more documentaries forthcoming.

I’d also like to encourage the premium cable channel to expand that working relationship into possibly a series of exclusive feature films or better yet, an ambitious anthology series featuring big-named filmmakers telling individual stories per episode on a shoestring budget. I would get a true thrill watching that.

In the meantime, check out this killer documentary series.