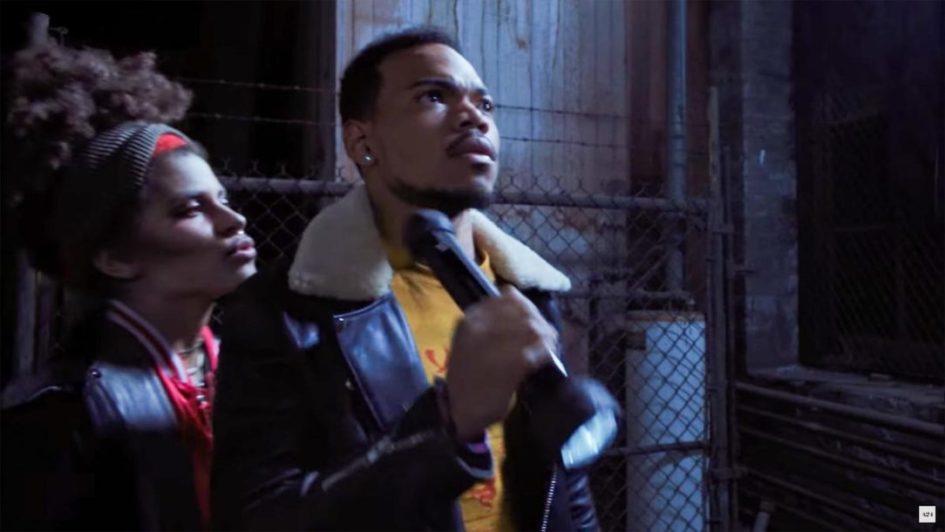 Austin Vesely, the music video king, has his first full-length film under his belt with Slice. In the past, Vesely has collaborated with Chance the Rapper on several music videos, including “Juice,” “Everybody’s Something” and “Angels.” They worked on Slice together, from what I can gather. Slice is a horror comedy that is supposedly reminiscent of horror films from the ’80s, but the film actually feels more ’90s to me. ’80s horror normally had a straight-forward plot line and took itself seriously, even when the audience did not. Slice, however, is very tongue in cheek and takes nothing seriously.

The story takes place in Kingfisher, where ghosts, vampires, witches and werewolves all live side by side, mostly. Then one day, a local pizza delivery boy is murdered, followed by other pizza delivery people and all hell breaks lose… Literally, the gate to hell is found in the basement of the local pizza place. This short blurb is the easiest explanation for the film I can give you, because the movie is all over the place. The film continually introduces characters. Sometimes the character gets an arc; sometimes the character is just dropped. The basic idea behind Slice is great, the first 10 minutes are strong and then… the story gets overly convoluted and it’s half as funny as it thinks it is.

If you were wondering if Chance the Rapper, who plays a werewolf in this film, can act… yes, he is actually pretty good. He isn’t great, but he is decent and hey, lots of people begin their acting careers with horror movies. Who knows? We might see Chance in something a little better sometime soon. Zazie Beetz, from Deadpool 2, who played Astrid, was also pretty amazing, as you would expect. As for the other actors, it was hit or miss. Was the occasional overacting on purpose for the movie or actual bad acting? I’m not sure, and if you aren’t sure, it’s not funny.

I think what the film lacked was a hero to follow throughout the tale. It made the film feel less cohesive and put together. The movie would go from character to character and it feels as if the film doesn’t really settle in until the last 30 minutes. None of this is to say the film is bad. In fact, I found it an enjoyable watch. It is just that the premise was so good, and there was so much potential, it’s just a shame the script was so messy. Also, for a horror comedy, the film is pretty short on horror, gore or blood of any kind, really. The film is rated R, but I’m not exactly sure why. I don’t remember anything that someone 13 couldn’t handle.

The film does have a certain style to it, so it’s an interesting watch if that is the kind of thing you’re into. It doesn’t quite strike me, nor does it lend to my tastes, but I could see where Vesely was going. I’m sure a small budget called for a bit of creativity and the bright costuming and over-the-top grease paint fx helped hide a small budget. Slice isn’t a bad film, nor is it great. I’d give the film two and a half stars. Unless you are just a huge Chance the Rapper fan, I’d say wait until this one is available on Netflix.