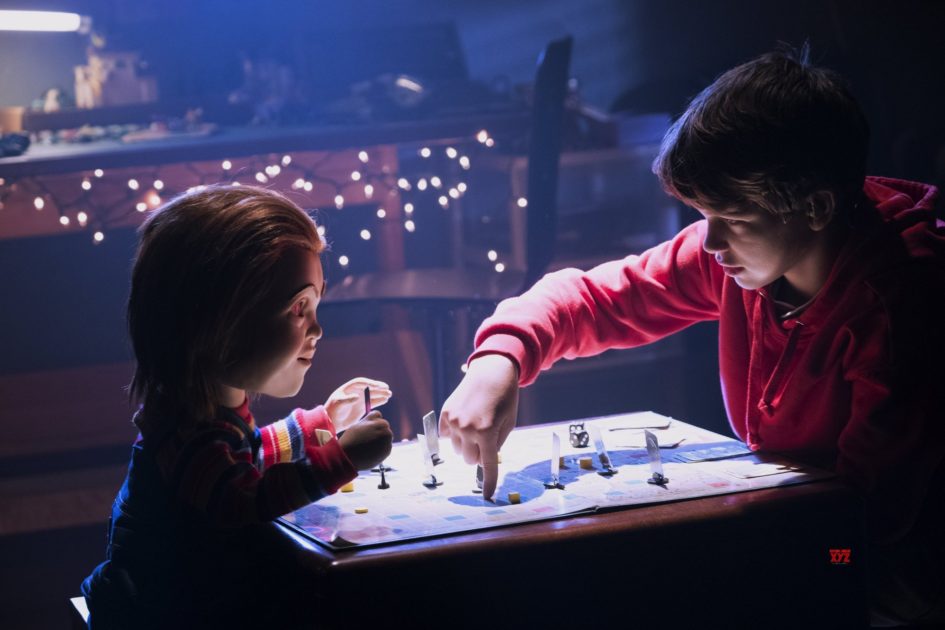 For the better part of the 41 years I have been alive, there has been one toy that’s very name inspires fear and disgust. A figure that started out with an unholy act of possession by a serial killer, evolving into a cult of followers who ultimately preyed upon a weak, wheelchair-bound girl to take control of her body. A plastic evil that killed his equally charming girlfriend, stuffed her soul into a doll, had relations with her, and then killed her just before she gave birth to a gender-confused creature. At no point in my life have I felt anything but utter revolting terror for this entity.

That is, until I got a chance to see the remake of Child’s Play.

Let’s face it: Hollywood has gotten lazy. I have harped about it for many, many weeks. You can see it in my reviews and my video blogs on the subject. It seems we are in the age of remakes. Some good. Most bad. It’s almost like it follows the 80/20 rule, and sadly, good remakes fall into the 20 percentile.

Child’s Play (2019) takes a new spin on the Chucky story. The Buddi v1 doll that will become Chucky is a artificial intelligence doll from the Kaslan Corporation, which makes “Internet of Things” devices for homes, such as thermostats, televisions and tools. Buddi is designed to interact with these devices as a sort of hub, allowing users to control these through the doll. Buddi even learns from his owners, controlling these devices for them based on his learned behaviors. He locks onto the first person he sees when powered up, becoming their friend forever.

Unfortunately, this Buddi doll has had some issues, including not being able to connect to other devices. Returned as defective, the doll winds up in an overseas sweatshop. After just being humiliated by his boss, the worker tasked with fixing the doll instead removes all the safety features in its programming. Soon, the doll is re-packaged and shipped back to the U.S. to be sold again.

Soon, it comes into the possession of Andy Barclay (Gabriel Bateman). After making Andy his “forever friend,” the doll names itself Chucky, obviously still dealing with its glitches. At first, Andy is not happy with Chucky, but soon they develop a quasi-friendship.

With Chucky’s programming slightly off, he is able to act more like a small child than just a toy, giving him the ability to cuss, make “scary” faces and interact with other kids, who soon become Andy’s friends. However, with his safety features off, Chucky soon develops troubling behaviors. He attacks Andy’s cat after it scratches him and soon begins mimicking the horror films that Andy and his friends watch. Wanting to make Andy happy no matter what, Chucky takes steps to eliminate anything (or anyone) that goes against that goal.

The first thing we need to talk about is the doll, itself. Honestly, it is hideous. Why any kid would want a Buddi toy is beyond me. The default facial expression on the doll looks like it is constipated. I understand that they wanted to have a clear difference between the old and new Chucky dolls, but this is just horribly designed. It’s hard to believe that this doll flies off the shelves like Cabbage Patch Kids in the 1980s. A redesign is definitely needed before any sequels come around.

There’s a lot of light-heartedness in the early part of the film. With Mark Hamill voicing Chucky, you knew there would have to be a callback to his Star Wars fame. And the movie delivers a very cute and funny callback when Andy tries to give his new Buddi doll the name “Han Solo.” Also, several of the “scary” faces Chucky tries out look a lot like The Joker, another famous character that Hamill has brought to life with his voice. Andy and his mom, Karen (Aubrey Plaza), also have great chemistry. With Karen being a young, single mother, she acts a lot of times like a bigger sister to Andy, and it plays well, especially when the dynamic changes toward the end, when she has to become Andy’s protector.

Even with the horrendous-looking doll, I give Child’s Play four out of five stars. Chucky, for the first half of the film, acts like a dog. He learns what makes Andy happy and sad, wanting to do everything he can to make him happy. Due to bad programming, he takes things a little too far, and for that he is tossed away. I feel sad for Chucky about halfway through the film, as I can only imagine what it is like to have someone you are sworn to protect turn on you for doing what you thought is right.

Me?? Feeling sorry and sad for Chucky??? Never in a million years thought I would say that, much less feel it.