Get Your Act Together, American Horror Story! 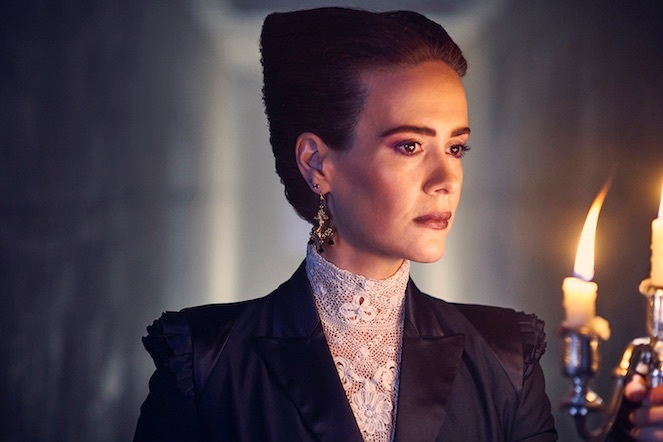 American Horror Story Season 8 started with a bang. Opening up like a good Zombie film with the world quickly dissolving around everyone, the first episode was a fun watch. Unfortunately, most Zombie films end on much less of a bang and that is precisely what I fear will happen with the new season of American Horror Story. Considering how terrible the last two seasons have been, I feel having my guard up makes perfect sense. That said, over the course of me reviewing various television series, I have learned one thing: You can’t judge an entire season based on the first episode.

In case you missed the season premiere and have been living in a cave… the season is based on the Apocalypse. Hydrogen bombs have ignited in major cities across the world. As of yet, we do not know who set the bombs off or why. Some people have survived due to a “collective” (who may or may not have set the bombs off), who have several bunkers where the wealthy and those with the right DNA have been sent to wait out the end of the world. Supposedly, they are the last people left in the world.

OK, I already have an issue with this, because I know many people have their own bunkers here in the U.S. I know there are also places across the world for wealthy people. I also know that the United States government has a place for the President of the United States. I’d imagine most world leaders also have places to go. So, I can’t concentrate on the show, due to this blaring plot hole. Also, I know that unless the hydrogen bombs blew up, say, a nuclear power plant, the likelihood that a nuclear winter would encompass the entire world isn’t likely. So, either Ryan Murphy expects us to suspend our knowledge quite a bit, or more information is coming.

I’m hoping it’s the latter. Perhaps the inhabitants of the bunker are being lied to, or maybe “the collective” made sure that governments were not able to successfully get to their safe spaces. I have no idea yet. I have to be honest, I also find the characters who make up our first episode to be a tad boring and ill cast. For instance, the girl who plays the wealthy blogger in the first episode (whose name I cannot find anywhere) is no Paris Hilton or Kardashian. She just doesn’t have that It Girl quality, but seems far more like an every girl in her looks and mannerisms. Adina Porter plays a second-rate Oprah, but she doesn’t even come close to being a third-rate Oprah. She is missing that grandiose bigger-than-life personality. Sarah Paulson is the bad guy in Episode One, but again, just isn’t believable in that role. Paulson is a good enough actress, but is hard to swallow as a bad guy. She is just far too meek sounding with her light lisp and soft voice. I am also hoping we move fairly quickly from the bunker, as that setting is boring and claustrophobic to watch.

Quite frankly, Season 8 had better quickly delve into an interesting storyline if it wants to keep me as a viewer. The past two seasons were so bad, they were unwatchable. It is going to take one hell of a season to win me back. This season just might do that, but I am not going to count on it quite yet. So far, all I can say is I will be watching the next episode, but who knows if I will watch further than that.