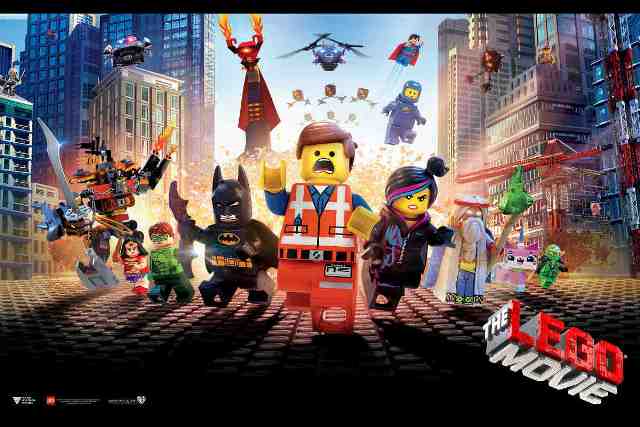 Who would’ve thought a movie based on a toy line would wind up being a critical and commercial success, as well as one of the best movies of 2014?

Almost six years in the making, The LEGO Movie was well worth the wait. Featuring an all-star cast portraying an all-star collection of great characters (from historical people to comic-book superheroes to Star Wars characters to Shaq?), the storyline is one everyone can appreciate.

In a world where everyone follows the instructions, Emmet Brickowski (voiced by Chris Pratt), is a generic construction worker who must learn to live his own life. His life is flipped upside down when he uncovers the long-lost Piece of Resistance, a mystical object that may be the only thing to stop Lord Business from destroying multiple LEGO universes. The catch: Emmet lacks the confidence to become the hero.

Through the mystical teachings of the wise wizard Vitruvius (voiced by Morgan Freeman), Emmet learns the only thing he needs to do, to be special, is to believe in himself. A movie that relays a positive message for children of all ages and also encourages the audience m to use their imagination in real life? In a rare Hollywood moment, Everything is Awesome about this movie!

We had a feeling The LEGO Movie was going to be successful, almost two years ago. In a variety of celebrity interviews, Matt got a couple of Hollywood types to comment on the movie:

– “It was actually an excellent movie. My kids loved it. I was actually jealous. Man, I want to be in that movie. (laughs) It’s the same guys I worked with on the other LEGO movie, so maybe I’ll call them up and tell them to put me in the next movie.” – Star Wars: The Clone Wars actor Tom Kane, hoping for a role in The LEGO Movie 2.

The LEGO Movie pays homage to old-school movies by making the CGI animation feel like stop-motion animation is being used. Again, everything the filmmakers did, from the characters chosen to the voice actors and the filming style is totally on par. The movie even gets META at the climax (this situation could have been a little tricky,) but it couldn’t have been handled any better that what appears on screen!

In terms of characters, there’s some great actors spouting funny one-liners left and right, throughout the film. Batman’s character is ridiculous (and ridiculously funny!) and the 1980s spaceman was a hoot. I have no idea which direction the filmmakers can go with the already-planned sequel. With so many different LEGO playsets at their arsenal, the number of LEGO universes to choose from is practically infinite.

Strength: Incredibly funny movie with a positive message.
Weakness: Honestly, nothing much to report. That’s a first!
WTF Moment: LEGO figures tied up with rubber bands? This high-tech movie definitely shines when it tries to look low tech.