Redbox Rental: This Is The End 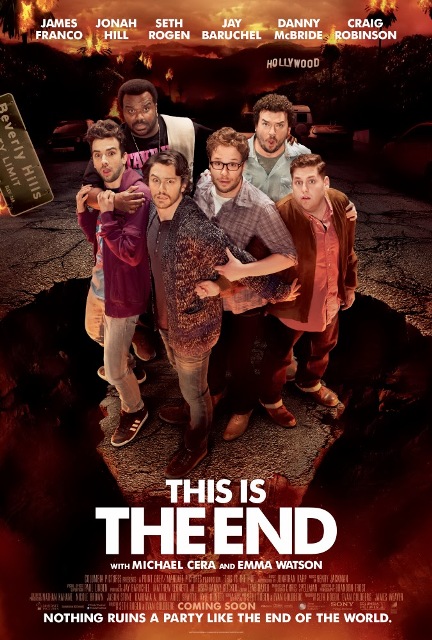 Is it a mockumentary? Or is it life imitating art, imitating life, during Kingdom Come?

Based on the short film Jay and Seth vs. The Apocalypse, This Is The End features six super-goofs playing slightly twisted versions of themselves, during the Apocalypse.

Jay Baruchel has returned to Los Angeles to visit his best friend, Seth Rogen. Although Jay is uncomfortable around the LA lifestyle (and Rogen’s friends), he agrees to attend James Franco’s houseparty with his best friend that just so happens to coincide with the End of Days.

Each character has its own flaws, but cluelessness reigns supreme. It takes a passage of Scripture for the housemates to finally catch on and attempt to change their fates for the better.

The true genius of this movie isn’t in expecting an Oscar-winning film — because it definitely is not — but it’s the smaller moments of interaction between the actors, who are all obviously off-camera friends, which is where This Is The End shines.

The house has a great atmosphere and actually becomes a supporting character throughout the film. Leaving the house, the outside world is definitely a low-def experience. The CGI is more than a little cheesy, but that’s part of the charm.

Make sure to watch the background for many, many Easter eggs. There are so many celebrity cameos, it’s like playing Where’s Waldo… the drinking game. Keep your eyes peeled, especially during the grand finale!

Including Harry Potter’s Emma Watson was an incredible bit of casting for this movie. Her character is one of the few sane ones, but it’s this ridiculous statement that had me balling with laughter: “I would say it’s completely obvious what’s going on here: It’s a Zombie invasion.”

This Is The End combines multiple genres into one film, including cannibalism, The Rapture and The Ten Commandments. Somehow, the meandering storyline eventually goes from a satire of the entire Los Angeles lifestyle, to a self-help improvement guide (and that’s not entirely a bad thing).

I’d love to have seen the gag reel for this flick (if there even is one). I wouldn’t know, since none were included with this rental version.

Strength: So many big-named actors… so little time.
Weakness: The storyline meanders a bit, but still fun.
WTF Moment: The homemade trailer of Pineapple Express 2: Blood Red is filmed with a handheld camcorder, so expect no flashy special effects, but plenty of ridiculousness.

WTF Moment:
– “You brained him.”
– “I like my dick-tent.”
– “Take it easy, Dumbledore.”
– “You couldn’t handle my mid-drift.”
– “I don’t want to die at James Franco’s house.”
– “I’m sure the Green Goblin can afford some more bacon.”
– “If a huge earthquake happens, who do they rescue first? Actors.”
– “Just because a bunch of people fell into a hole outside doesn’t mean we can’t have some fun.”