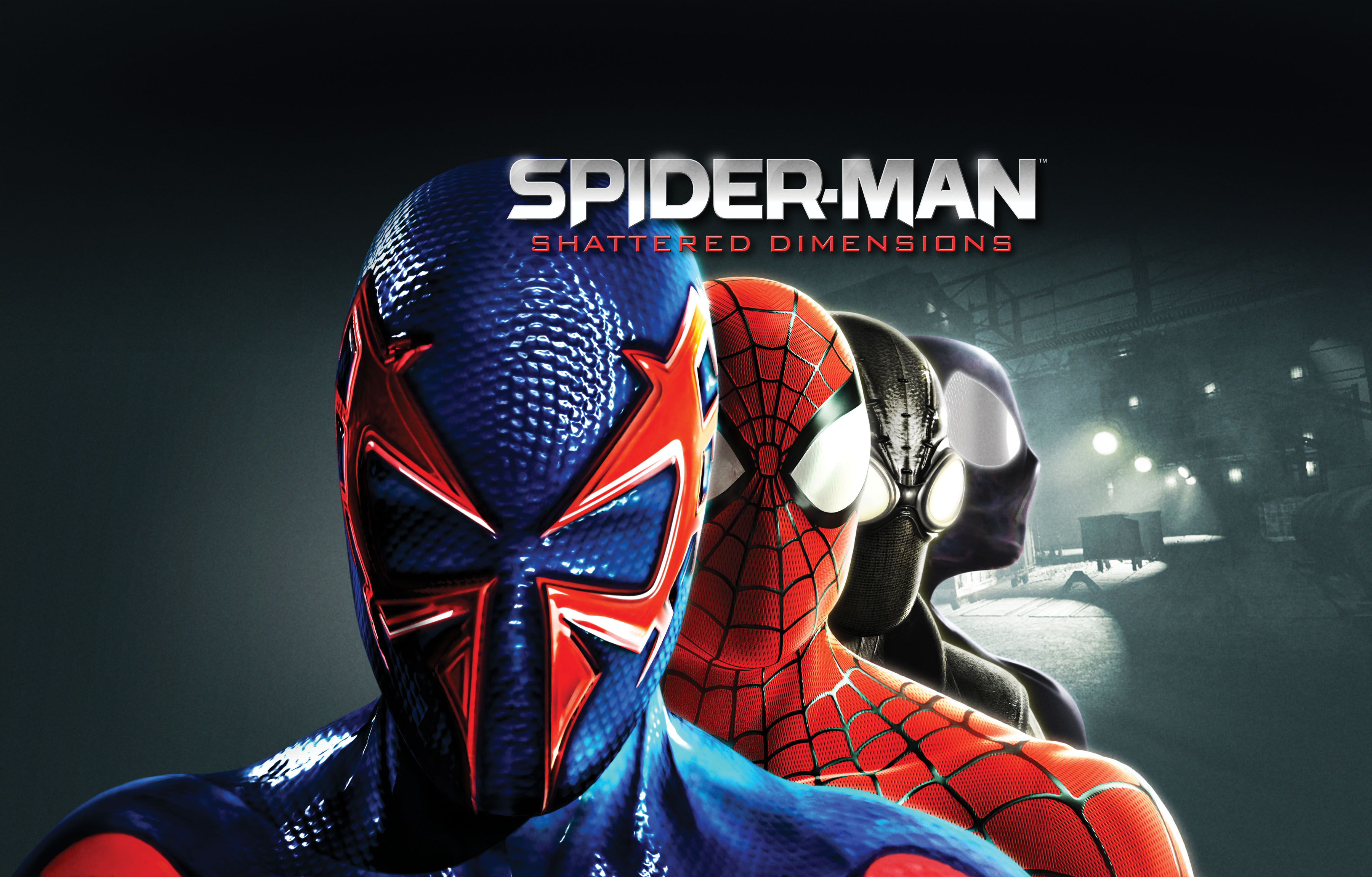 Spider-Man, Spider-Man,
Swings through realities as fast as he can,
Finish the mission,
Defeat the boss,
Help Madame Web,
At all costs!
Look out!
Mysterio has no chance!

Hey there, true believers! I’m a big fan of comic books, video games and movies based on both. So, naturally, I was drawn to Spider-Man: Shattered Dimensions. In an all-new storyline, Mysterio has stolen The Tablet of Order and Chaos and has dispersed the 13 fragments of it to supervillians of four different universes. Madame Web guides each universe’s Spider-Man, as he battles to recover the fragments before all realities are shattered.

Stan Lee narrates in true comic-book fashion. But the main selling point of the game is the Spider-Man voice-actor reunion! Each Spider-Man character is played by an actor who previously portrayed Peter Parker and his alter-ego on TV. Neil Patrick Harris (Spider-Man: The New Animated Series) is the most popular of the lot, portraying the Amazing Spider-Man. Christopher Daniel Barnes (1990s animated Spider-Man) is the highly entertaining Spider-Man Noir of the 1930s. Josh Keaton (The Spectacular Spider-Man) plays an un-noteworthy Ultimate Spider-Man.

But the best of the bunch — by far — is Dan Gilvezan (Spider-Man and His Amazing Friends)! Gilvezan’s character is Spider-Man 2099, who lives in a dystopic, cyberpunk future and must deal with many, many bells and whistles, all happening at once. His commentary is sharp, witty and sometimes distracting, because it’s so funny. It’s a shame his awesome voice-over work has been kind of missing in action since the 1980s. Besides His Amazing Friends, Gilvezan voiced Bumblebee in Transformers, multiple characters on G.I.Joe and also worked on Jem, Spiral Zone and Teenage Mutant Ninja Turtles. I’ve missed him badly!

Shattered Dimensions features quite a few Amazing classic supervillians, including Kraven the Hunter, Goblin, Hobgoblin, Vulture, Hammerhead and Doctor Octopus. As a bonus, the crossover characters of Juggernaut and Deadpool are a delight. Mysterio — as the main antagonist — has never truly been a menacing character, especially since his costume consists of wearing a fishbowl on his head. But here, he finally gets the well-deserved spotlight and he’s quite impressive.

Each character has different fighting styles and each dimension has delightful, hidden Easter Eggs placed for the fanboys.

The more you play Shattered Dimensions, the more you unlock different combat upgrades. And within the Web of Destiny are individual goals you must attain in each level, in order to unlock other extras, including different combat styles and armor. Overall there are 16 different costumes, including Spider-Man 1602, Negative Zone Suit, Iron Spider, Scarlet Spider, The Bombastic Bag Man and Mangaverse Spider-Man that can be unlocked. There is also a Bonus Gallery that includes unlockable figurines (collectible trophies), concept art, cut-scene movies, character bios and credits.

Beenox must be applauded for making Spider-Man: Shattered Dimensions such an incredible experience. The acting is superb, the action is amazing and the graphics are great. I’ve played quite a few Spider-Man video games throughout the years, but this is the ABSOLUTE BEST ONE, by far. In fact, this storyline is so strong, I expect it to be a future sequel for Sony. It’s lightyears better than Andrew Garfield’s The Amazing Spider-Man.

Each of Noir levels had me breaking out into endless fits of rage! I’m not a patient gamer, but somehow completed the game to 100 percent. Carnage drains people’s bodies to husks and turns them into zombie-like corpses. I thought that was a nice touch, especially since we’re such Zombie Fanatics!

Beenox is definitely bringing it! Shattered Dimensions is great!

Strength: Amazing Voice Actors! But I need more Dan Gilvezan!!!
Weakness: Too many game-breaking glitches, which destroy all hopes of completion.
WTF Moment: A female Doctor Octopus? Seems like a terrible stretch.

Notable Quotes:
– “Is that a cartoon pig?”
– “It’s so easy, Wolverine can do it!”
– “I’m Spider-Man. That’s what I do. I break pots.”
– “Come on! You started the hotdog eating contest without me?”
– “I am NOT losing to a monster made of… malevolent spaghetti!”
– “Jeez. Not often you see a guy pick a fight with a building… and win.”
– “Get in here boys, show Wally Webs here he can’t twist my doorknobs!”
– “So, how hot is Kitty Pryde? Almost as hot as that redhead I always see you saving.”
– “Hey Kraven, remember the old days where you wore that lion vest that fired lasers?”
– “…and remember viewers, I’m available for black-ops missions, assassinations and birthday parties.”