The Phantom of the Opera Terrorizes TPAC 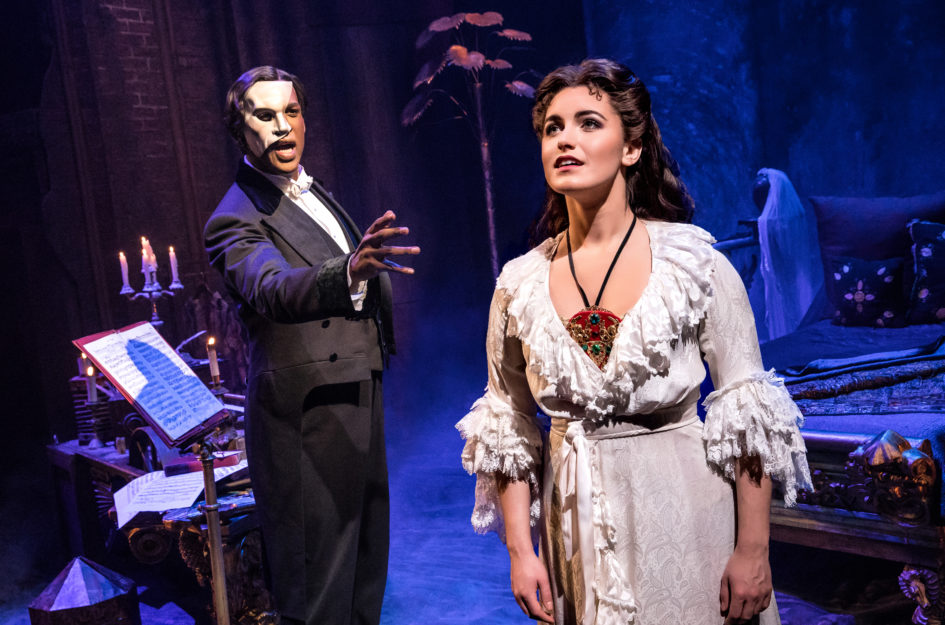 Quentin Oliver Lee as The Phantom and Eva Tavares as Christine Daaé in Phantom of the Opera. Photo by Matthew Murphy.

Per Matt
Just in time for the haunting season, a new version of Andrew Lloyd Webber’s classic appears at TPAC for a two-week engagement. The Phantom of the Opera is there…

Cameron Mackintosh brings this new production of the Broadway classic to downtown Nashville, showing now through Nov. 4 in the Tennessee Performing Arts Center’s Andrew Jackson Hall as a part of a national tour. With new staging, new costumes and an all-new chandelier, this version of Phantom would make Andrew Lloyd Webber proud.

Speaking of Webber, he noted, “Having received great critical acclaim in the U.K. and North America, I am really pleased that Laurence Connor’s new production of Phantom will continue to tour the U.S., playing in tandem with the Broadway production, which just celebrated 30 years at the Majestic Theatre.”

Cameron Mackintosh said, “With Phantom still the reigning champion as the longest-running production on Broadway after 30 phenomenal years with no end in sight, I’m delighted that this spectacular new production of Phantom has been as well-received in the U.S. as the brilliant original and has already been seen by more than 3.7 million people across North America since it opened in November 2013. With an exciting new design and staging, retaining Maria Björnson’s amazing costumes, the new Phantom is thrilling audiences and critics alike all over again. With the production continuing to be such a success, we are delighted to welcome our exciting new stars to keep the music of the night soaring for many years to come.”

The play is based on Gaston Leroux’s novel, Le Fantôme de L’Opéra, centered on the famously masked figure, who lurks beneath the Paris Opera House’s catacombs and terrorizes all who inhabit it… with the exception of young Christine, who he will stop at no end to make a star. Laurence Connor’s direction is sharp and fluid, with the action and the classic music given the lion’s share of the spotlight. I really didn’t notice too many differences, storywise, from the original play, but I did notice there was no reflection in Christine’s mirror, when the Phantom initially makes its appearance. Also, when descending into the underground labyrinth, there were no famous candelabras leading the way — but there were stairs that retract in and out of the sides of the set. That was interesting.

The overall highlight of the entire production is the classic music, precisely performed by the orchestra, which also includes 10 local musicians. The sets are surreal and Quentin Oliver Lee’s booming voice works well as the Phantom, with his looming presence bringing fear to all who oppose him. I really enjoyed his acting and hope to get another opportunity to see his work during future shows.

For almost 30 years, Phantom has been a box-office phenomenon, appearing in numerous countries and spoken in a variety of languages. But the languages of fear, longing and love are universal, all  reborn for the 21st century in this performance.

The length of the show is two hours and 30 minutes, with a 20-minute intermission. For fans of the play and the music, it’s very enjoyable and the entire show just flies by.