Vanya and Sonia and Masha and Spike by Nashville Repertory Theatre 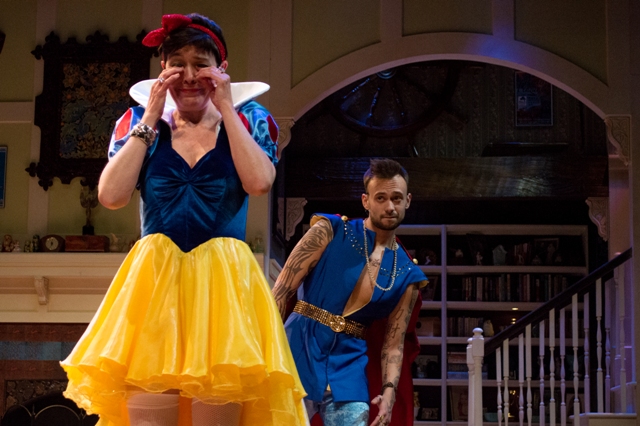 Per Matt
Nashville Rep’s final performance of the year goes out with a bang!

Celebrating its 30th-year anniversary, Nashville Repertory Theatre presents Vanya and Sonia and Masha and Spike. This Tony Award-winning Broadway play is a comedy written by Christopher Durang and directed by Nate Eppler that adapts Chekhov themes to modern relationships, wrapped around the outrageousness that is every-day life.

At the onset, every character has their own obsessions. Bobby Wyckoff’s Vanya and Martha Wilkinson’s Sonia are middle-aged siblings who worry about not living life to the fullest, after taking care of their recently deceased parents. Shelean Newman’s Masha is the dismissive, vain and cruel sister who provides for the family.

Tempers flare after Masha threatens to sell the family’s country home in Bucks County, Pennsylvania. Rivalries are renewed, grievances are aired and tantrums are thrown. An unexpected event (a costume ball) bonds the three characters, allowing each of them to grow, as people.

There’s some awkward make-out sessions, two women having a good cry (it’s both sad and hilarious), a mental breakdown and more than a handful of laugh-out-loud moments that propel the show to a brisk pace.

Each of the on-stage performers is great, but it’s Tamiko Robinson Steele, who steals every scene she’s in. Her character is quite a cut-up, even though she has everyone’s best interests at heart.

The best part of the play was Martha Wilkinson’s portrayal of Snow White’s Evil Queen, as played by Maggie Smith on her way to the Oscars, which is incredibly hilarious! Sounds confusing? See the play. It makes sense. It’s also really, really funny.

I can’t quite put my finger on it, but there’s something about actors portraying other actors that makes any production over-the-top funny. This play is no exception.

Make sure to see Nashville Rep’s final performance of the year… but whatever you do, make sure to beware of Hootie Pie!

Notable Quotes:
– “Don’t feed us your anger, please.”
– “Let’s not talk about this now, let’s wait for coffee… or Armageddon.”