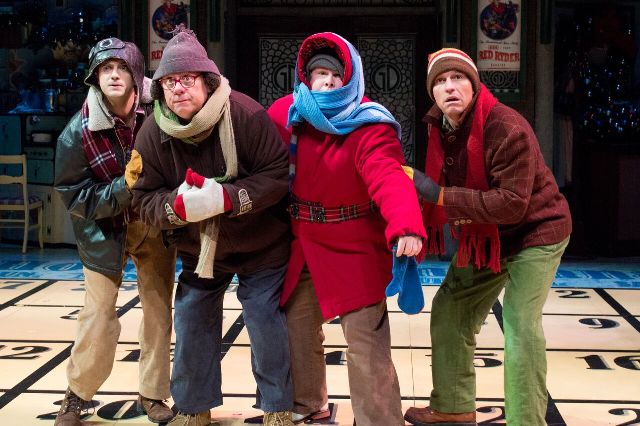 Per Matt
You may remember the major award, Aunt Clara’s ridiculous Christmas present, the schoolyard bully with yellow eyes, the unique Christmas meal and the triple-dog dare, but seeing it all, come to life on stage is an incredible experience unto itself, thanks to the work of Nashville Repertory Theatre.

A Christmas Story is now appearing at the Tennessee Performing Arts Center in the Andrew Johnson Theater through December 20, 2015. Produced by Nashville Rep for the seventh year, much like the 1983 now-classic holiday movie, as well as the book, In God We Trust: All Others Pay Cash, which it is based, this play has become a local holiday tradition. So much so, many actors will return from distant lands just to perform in it. But this year, the cast includes all-new actors to shake up the lineup.

Derek Whittaker is featured as Ralphie, the young boy who’s desperate to receive the “official Red Ryder carbine-action 200 shot range-model air rifle with a compass in the stock and this thing which tells time” as a Christmas present. Convincing his parents, his teacher and even Santa Claus, himself, that it would be a good present seems to be an ominous hurdle that he must overcome in a short amount of time. Joining him on his quest are friends Flick (Mikey Rosenbaum) and Schwartz (Patrick Waller), as well as his kid brother, Randy (Curtis Reed).

Based on life in the Midwest during the 1940s, the storyline is full of nostalgia, holiday spirit and heartwarming moments, but there’s also lots of laughs to go along with it all. I really enjoyed the character of Miss Shields (played by Bobby Wyckoff), Ralphie’s teacher who is hilarious, but it’s Megan Murphy Chambers who shines as Ralphie’s Mother, patiently tolerating the antics of The Old Man (also Bobby Wyckoff), encouraging questionable dinner-time etiquette and dispensing clean justice whenever dirty language is used. It really is interesting to see how different characters can bring out the best in these actors.

As a fan who has read the book by Jean Shepherd and annually enjoys multiple airings of the movie during its 24-hour marathon on basic cable, watching this performance by Nashville Rep gets better each year. Highlights include a joyful lampshade interlude, as well as a great Little Orphan Annie routine that is new for the show this year. Audience participation is encouraged throughout the performance, whether it’s barking like the Bumpus hounds, howling like the wind or proclaiming, “You’ll shot your eye out!” all of which increases the enjoyment of the show.

The holidays always seem to bring out the best and the worst in families and Phillip Grecian’s adaptation is enjoyable for kids of all ages. Just make sure to look out for those icicles… they’ve been known to kill people.