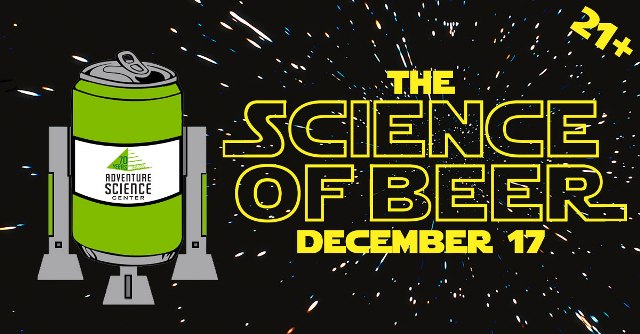 Per Matt
A long time ago, in a brewery far, far away, Nashville’s Adventure Science Center fused science and craft-beer together, creating a one-of-a-kind beer festival that celebrates local and American craft beer in a fun and educational event.

The seventh-annual Science of Beer will take place on Thursday, Dec. 17, from 7-10 P.M. sponsored by Lipman Brothers. Choose your alliances carefully, as the event’s theme coincides with the upcoming feature-film release of Star Wars: The Force Awakens! There will be more than 70 different brews available for tastings, beer-science demonstrations, speakers and activities, along with liquid nitrogen beer ice cream and more!

Make the jump into hyperspace by purchasing tickets to the event, which will only be available for a limited time. All attendees must be 21 or older and are encouraged to wear costumes of your favorite Star Wars characters.

Events Manager Jennie Stumpf previews Science of Beer, letting us know what to expect at the 2015 event.

First of all, how would you describe Science of Beer, in your own words?
– “Adventure Science Center’s Science of Beer is a one-of-a-kind beer festival for both beer lovers and science-enthusiasts alike. Not only can you sample 70+ craft beers, but you have total access to the Science Center’s exhibits. There will also be beer-themed science activities and demos, as well as talks and displays from local beer experts.”

This year’s event has a Star Wars theme. How was it chosen?
– “The event always occurs on the Thursday before Christmas. This year that date turned out to be the same night as the midnight premiere of Star Wars Episode VII! The theme presented itself. Beer and science are still the focus, but there will be some clever Star Wars references throughout.”

Are guests encouraged to arrive in costumes? Will there be a costume contest?
– “Guests are more than welcome to wear costumes — we expect many attendees to go on from here to the midnight showing! — but there is not going to be a costume contest. The focus is the beer and beer-related activities.”

Beer and science seem to be the perfect match. What can craft-beer enthusiasts expect at the event?
– “They can expect to meet a lot of fellow beer enthusiasts and many beer experts, including Craft Brewed’s owner Chip DeVier, PUBlicity’s Chef Nick, brewery reps at some of the tasting tables, and our own beer-science experts, the Adventure Science Center educators.”

What is new for Science of Beer in 2015?
– “The beer! Lipman is bringing a great variety of beers this year, including several imports.”

How many breweries will be participating this year?
– “Almost 30.”

What was the process for selecting the breweries for this event?
– “The beer is all donated by Lipman Brothers. This year’s lead at Lipman is Nikki Armstrong and she has gone above and beyond for us putting together this great selection.”

What are some of the topics for the beer-related presentations?
– “I can tell you that both Craft Brewed and PUBlicity will be back this year and have brainstormed all-new topics. Keep an eye on our website for more details as they’re confirmed!”

Liquid nitrogen beer ice cream is one of my favorites. Can you tell me a little about the process of making it and what beer flavor it will be this year?
– “It’s basically heavy cream and craft beer, frozen with liquid nitrogen that only our expert educators handle. I, too, am a big fan. This year’s beer is going to be made with Mayday Brewery’s New Silk Mill Stout.”

This is one of your biggest fundraisers of the year. How the proceeds of the event used?
– “100 percent of the proceeds go toward maintaining and improving the exhibits and educational programs at Adventure Science Center.”

Is this the only beer-related fundraiser of the year for Adventure Science? Can we expect others in the future?
– “This is definitely the most beer-centric event at ASC, but we always partner with local breweries for our quarterly Way Late Play Dates. For those who have attended a recent Way Late, they will recognize the great team at Mayday Brewery, who is sponsoring this year’s Beer Garden.”

Are tickets still available? Do you expect the event to sell out?
– “Yes, tickets are on sale, but selling fast! Buy your Patron Level ticket today, so you can enjoy a full pint in the Beer Garden. There’s also a ‘six-pack’ special, so get your friends on board to come too!”

Is there anything else you’d like to add?
– “Yes. Hip Hues is selling custom t-shirts and prints, redOrbit is passing out coozies, and everybody gets a souvenir pint glass, sponsored by Minuteman Press, with a design that is so cool you will definitely want this in your collection.”