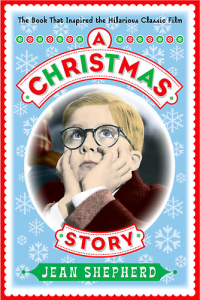 Is it remotely possible to improve upon the movie version of A Christmas Story? It is an-almost perfect screwball family holiday movie, one which normally airs for 24 straight hours on Turner Network Television. One which I usually watch, or listen to, for at least 20 of those 24 hours. It’s a Christmas classic, one which my entire family enjoys — and that’s a feat unto itself. I’d held off reading this book, also titled, A Christmas Story, because I’d worried it would lessen the movie experience… and I was incredibly wrong. If anything, reading this book makes me want to see the movie even more, now knowing the un-aired backstory of several major plot points.

This book is not entirely a novel, but a compendium of various us narrative essays of certain autobiographical events taken from author Jean Shepherd’s In God We Trust: All Others Pay Cash and Wanda Hickey’s Night of Golden Memories and Other Disasters. Together, when compiled, make up the movie, A Christmas Story. While the stories, as a whole, are mostly the same, reading this collection varies, from time to time, from the movie.

The overall story is told by the author, who as an adult, reminisces via flashbacks. The most famous of these include yearning for the “Red Ryder carbine-action 200-shot range model with this thing that tells time” as a child, while living in Northern Indiana. Other stories include: receiving Aunt Clara’s gift (which he does not try on), how little Ralphie acquired his Little Orphan Annie decoder ring (Hint: He was kicking a tin can down an alley when he spots the first Ovaltine can he’s ever seen.) and the origins of the most visceral entry of all Pop-Art History: the leg lamp.

For someone who has memorized many lines of the holiday cult classic, reading the parts of the book which differ from the movie were the most interesting. The big fight with the bully actually happens in the spring, along a sidewalk (not the school playground) and against bully Grover Dill (not Scut Farkus, as in the movie). Another quickly-skimmed topic is the redneck neighbors, the Bumpuses. The Bumpuses would absolutely give the complete cast of Moonshiners a run for their money. The junk-collecting, outhouse-using, moonshine-making, rat-infested, mystery creature-owning neighbors with 17 dogs were the absolute scourge of the neighborhood and it’s a shame they weren’t expanded upon, for comedy’s sake.

Quite a few of the movie’s greatest one-liners are taken verbatim from the book, but many more went unquoted. Author Jean Shepherd was also one of the credited screenwriters of the movie, and surely would have enjoyed using more. Omitting an adult’s perspective outside the story from the movie was a smart choice by Director Bob Clark. In fact, some of the best parts of the movie were not a part of this book, including the flag pole and tire-changing scenes. I don’t know if they were credited to Author Jean Shepherd or Director Bob Clark, but they are great, nonetheless.

This is a humorous, but not an easy read. Definitely a must-read for fans of the movie adaptation and fans of detailed descriptions of small-town Indiana life, where the biggest problems of children were deciding what to get family for Christmas.

Notable Quotes:
– “Oh no. You’ll shoot out one of your eyes.”
– “Indiana wit is always pungent and to the point.”
– “There are few things more thrilling in Life than lumpy letters. That rattle.”
– “Rarely had the words poured from my penny pencil with such feverish fluidity.”
– “We were living next door to a tightly knit band of total slobs, a genuine gypsy family.”
– “Preparing to go to school was about like getting ready for extended Deep-Sea Diving.”
– “Instantly the room was flooded with a wave of pink light that was pure perfume of illumination.”
– “I had woven a tapestry of obscenity that as far as I know is still hanging in space over Lake Michigan.”