Catching Up On: The Invasion 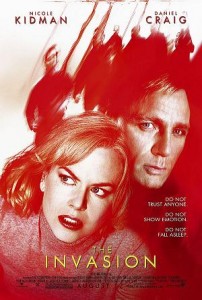 In this version, the Space Shuttle, Patriot, explodes during an unscheduled landing attempt. The country is littered with multiple space fragments that are contaminated with space spore organisms. Simultaneously, a dangerous new flu virus is blamed for a fast-spreading epidemic of unusual behavior throughout the population. Mandatory innoculation is recommended by the CDC.

The Invasion features Nicole Kidman and Daniel Craig, who both chose odd voices for their roles. And at times, their native tongues creep through. CDC Agent Jeremy Northam plays Nicole Kidman’s ex-husband, who’s partly responsible for spreading the disease. This “disease” is seemingly spread via innoculations, by touching or drinking the supernatural organism, or more importantly, puking on someone’s face, thus inhabiting host’s body. Not knowing what is in your food and drinks is a little creepy, and gives you second thoughts about taking (possibly contaminated) open drinks from others, whether at a restaurant or at a friend’s house.

Riding the subway train, Kidman learns how to trick these aliens: Remaining calm at all times, and not show any emotion. And by not sleeping, since humans seemingly transform into aliens at night, while sleeping.

The story is a little slow to develop, although at least half (if not more) of the movie is action… spent on the run. In a movie where the bad guys are found under a microscope and the world’s savior is a kid who recently had the chickenpox, Directors Oliver Hirschbiegel and James McTeigue work hard at keeping the audience’s attention.

What was Casting Director Ronna Kress thinking? Each of the three main roles (Kidman, Craig and Northam) are imports, playing Americans. And each one uses middling “American” accents. This film was widely panned, but I wanted to be fair to it. Seemingly, it had a lot things going against it, including multiple title changes and being shelved for at least a year, yet it was eventually made. At least the action scenes were good.

With Christmas and other holiday feasts right around the corner, make sure to literally watch what you eat. You wouldn’t want to accidentally become an alien while drinking spoiled egg nog!

Notable Quotes:
– “My husband is not my husband.”
– “This is to imagine a world where human beings cease to be human.”
– “It doesn’t hurt. It’s just like catching a cold.”
– “Our world is a better world.”
– “Well, for better or worse, we’re human.”