Nashville Rep is Raisin the Bar for Quality Entertainment 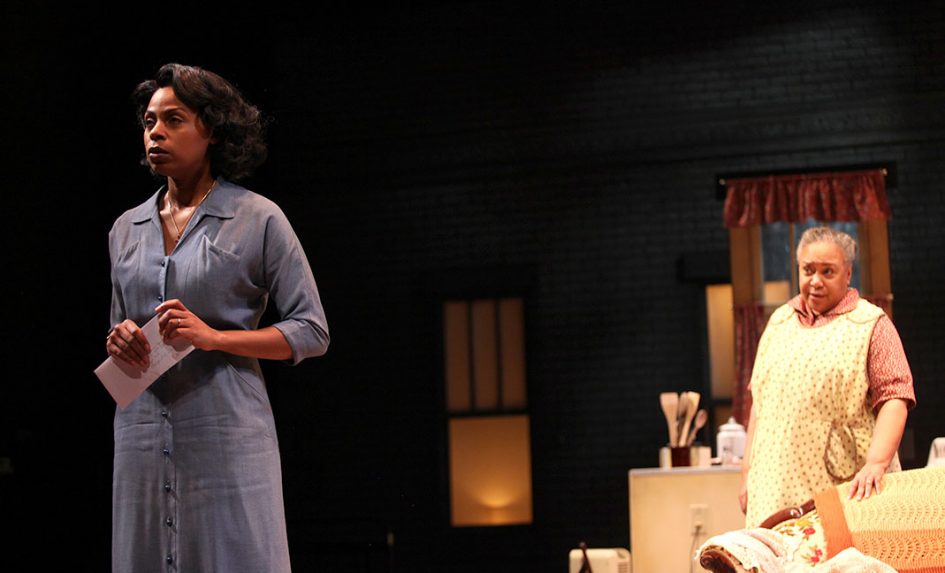 Per Matt
The Music City welcomes Eddie George’s return — this time at a different downtown stage, but still under the bright lights — as his character struggles to survive in A Raisin in the Sun, produced by Nashville Repertory Theatre. Performing for four weeks, this play is currently appearing in the Andrew Johnson Theater of the Tennessee Performing Arts Center through April 22, 2017.

As Walter Lee Younger, George portrays a family man living within a cramped apartment, along with his wife (portrayed by Tamiko Robinson Steele), his mother (Jackie Welch), his sister (Lauren F. Jones) and his young son (as played by Zechariah Brown and Russell Jacquese Acklin, Jr.). Written by Lorraine Hansberry and set in the Younger family’s apartment on Chicago’s Southside, circa 1958, each character deals with poverty and their individual goals differently. Walter’s dealing with his own get-rich-quick demons. His sister, Beneatha, attempts to discover her true heritage through dating men of different economic backgrounds. His son, Travis, just wants his own bedroom and possibly a yard for playing. His wife, Ruth, has a difficult moral decision to make, as the family outgrows their current surroundings. And Lena Younger, the matriarch of the family, stresses out while deciding what to do with a $10,000 insurance payout, following the death of her recently deceased husband. Each of these characters attempts to better themselves, with varying degrees of success.

Originally, A Raisin in the Sun spoke of fighting racism, making dreams become a reality and creating a better way of life that were all topical back in 1959, when it was written, as it is now, 58 years later. The production was particularly noteworthy, as it was the first play by a black woman on Broadway and it was also directed by Broadway’s first black director, Lloyd Richards. It went on to win many awards, including the New York Drama Critics Circle Award for Best Play, as well as four Tony Awards, including Best Actor in a Play, Best Actress in a Play, Best Play and Best Direction of a Play. This successful track-record sets the stage perfectly, as the final production of the season for Nashville Rep. 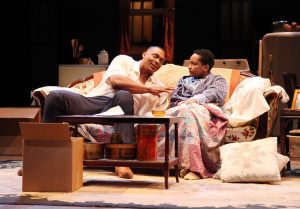 Eddie George and Zechariah Brown in Nashville Repertory Theatre’s A Raisin in the Sun. Photo by Michael Scott Evans Photographer.

It’s great to see Eddie George back in Nashville, after recently performing as Billy Flynn in the Broadway play, Chicago. His previous Nashville Rep performance (The Whipping Man) was incredible and his performance here is equally impressive. Not long ago, I attended a previous Nashville Rep production that highlighted a memorable highschooler, but this play has not one, but two middle school students making their Nashville Rep debuts (performing as Travis Younger), and both have bright futures ahead of them. Tamiko Robinson Steele is also making her second Nashville Rep appearance (Vanya and Sonia and Masha and Spike) with this play. Her performance is the strongest, and it is her character who conveyed the most emotion, breaking down the barriers around the other characters and pulling everyone together as a family.

Nashville Rep goes out with a bang by showcasing A Raisin in the Sun for the final production of 2017. Make sure to get your tickets before they’re gone.