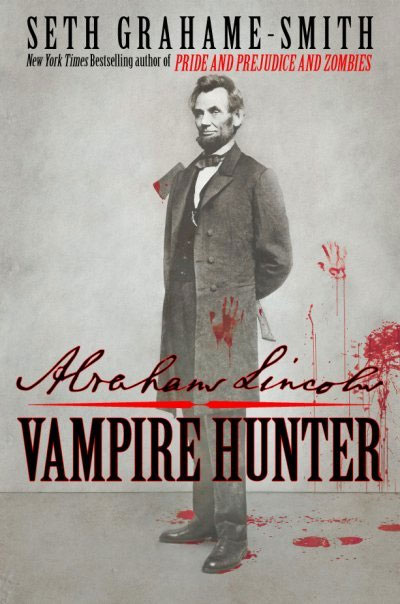 FULL DISCLOSURE NOTICE: I’m a big fan of alternate-reality stories. Combining the familiar with a “What if…” scenario piques my imagination and instantly grabs my attention. So, when Seth Grahame-Smith details the untold stories from Abraham Lincoln’s secret journals and his lifelong battles against an undead menace, they seem at the very least, plausible.

In order to make this Abraham Lincoln: Vampire Hunter work, Grahame-Smith employs a unique device: He inserts himself into the story. Thus, the story-within-a-story angle begins with a fictional version of himself receiving a bundle of books by a mysterious person. His sole purpose is to write a manuscript, based on the journals, detailing Lincoln’s constant battles with vampires in the late 1800s.

From a humble upbringing, leading all the way to the White House, Abraham Lincoln experienced more than his full share of deaths in the family. Back in his day, the United States of America was still a sprawling young country, slowly moving Westward with lots of countryside between each city and with that, even fewer doctors in between. It was the death of his mother, Sarah Lincoln, that would haunt young Abe for the rest of his life, leading to his pledge to “kill every vampire in America.”

Upon learning the truth behind his Mother’s death — the consequence of his father’s business transaction gone horribly wrong — Young Abe sought revenge. He practiced throwing axes, creating weapons to fight this uncommon menace. After gaining experience by killing his first vampire, he is taken hostage on a subsequent hunt by a future ally, Henry Sturges. Sturges becomes Young Abe’s benefactor, teaching him everything about vampires, because he has first-hand knowledge: He is one. But not only that, he sees the potential in Young Abe, a flash of brilliance, and foreshadows Lincoln’s future potential.

Along the way, Abe discovers great truths:
– Southern congressmen are likened with vampire interests.
– Vampires of the South are the true cause of the Civil War, seeking to enslave all humans after the conflict.
– President Lincoln’s security detail included good vampires, originating the Secret Service before it was known as such.
– Vampires fought against Great Britain in the Revolutionary War alongside Americans after being hunted to near extinction in Europe.
– A majority of vampires are killed at the conclusion of the Civil War, while the remainder flee for Europe, South America and the Orient where they won’t be hunted.

A great deal of historical research was done for this book, and it shows. Grahame-Smith gives double entendre meanings to actual historical speeches, creating a vampire validity borne in actual speeches. Fact and fiction are blurred together, giving the possibility of the storyline a chance.

Based in time when there was no internet, no television, no 24-hour news cycle and very few books to document strange occurrences, this “What if” storyline gets enough credibility to at least be a possibility. Who are we, as a people, to judge there weren’t actual vampires existing in the late 1800s? For many years, Native Americans have told stories of Bigfoot, Skinwalkers and other mysterious tales experienced by their ancestors. And South of the border, Mexicans have told the tale of the Chupacabra for just as long, with many purporting to have evidence of such a creature’s existence. If other cultures detailed mysterious cryptids long ago, why not Vampires in North America?

The book takes form as a series of letters, borrowing from the style of World War Z. While the introduction sets the foundation for the rest of the book, I’d have liked to read more about the fictional version of Grahame-Smith, who also serves as the omniscient narrator throughout the story.

The politics of Abraham Lincoln played a major role in his life, but even in this alternate timeline, Grahame-Smith tries to rewrite history, making slave owners (and Southerners in general), the bad guys. Encouraged by vampires, the slave trade was an important source of nourishment, one which the monsters were intent to keep alive. While I do not endorse slavery or the slave trade, I am proud to be from the South. After many long discussions with my elderly relatives, I can wholeheartedly admit that my entire family lineage has never had any dealings with vampires and does not intend to start any time soon. Not all Southerners are bad. Please note that for your next book, Seth Grahame-Smith!

Abraham Lincoln: Vampire Hunter further solidifies Seth Grahame-Smith’s title of being the genre mash-up master. Often imitated, never duplicated: Grahame-Smith originated the mash-up genre fad and continually improves his craft with each book he writes. I’m continually impressed with his works, including: Marvel Zombies Return, Pride and Prejudice and Zombies and now, Abraham Lincoln: Vampire Hunter. I’m eager to pick up his next tome, Unholy Night, sure to be another bestseller. And I can’t wait to catch the feature film adaptation, opening this week by Producer Tim Burton (My Favorite!!!) and Director Timur Bekmambetov.

Strength: Blurring the lines of fact and fiction, the Historical Genre Mash-Up is born!
Weakness: Stop piling it onto the South. We lost the Civil War. Now we’re Vampire sympathizers?
WTF Moment: John Wilkes Booth was the lone remaining Vampire in America.

Notable Quotes:
– “Sic semper tyrannis!”
– “I’m the big buck of the lick!”
– “Some people are just too interesting to kill.”
– “I hereby resolve to kill every vampire in America.”
– “And what use is a soul to a creature that shall never die?”
– “Your purpose is to fight tyranny… and mine is to see that you win.”
– “If you do not want to use the army, I would very much like to borrow it.”
– “He’d grown a beard for the first time in his life to conceal the scar on his chin.”
– “So long as this country is cursed with slavery, so too will it be cursed with vampires.”
– “I will see this war to its end, but I do not care to see another vampire so long as I live.”
– “Judge us not equally, Abraham. We may all deserve hell, but some of us deserve it sooner than others.”
– “After all, to believe in vampires is to reject reason! To acknowledge a darkness that is not supposed to exist anymore.”
– “It turns out that the towering myth of Honest Abe, the one ingrained in our earliest grade school memories, is inherently dishonest.”