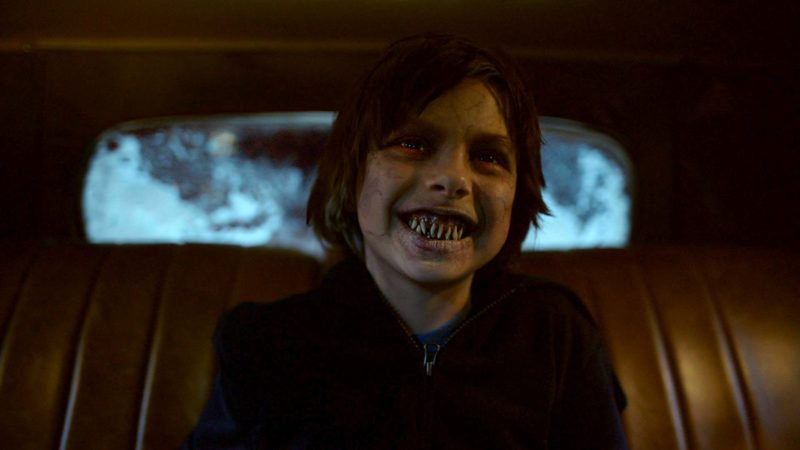 There's more than a few creepy smiling faces in Season 1 of NOS4A2.

Knives, bridges, dark tunnels, strong creatives and inscapes. Even if you watched the entire first season of NOS4A2, you may still be confused about everything previously listed. And you wouldn’t be alone. But after 10 episodes, the AMC TV show featuring a different kind of vampire story has moved its initial storyline forward, but in the process, our hero hasn’t made a whole lot of progress in her battle against immortal dark forces.

It’s true, the pilot was a hot mess, but a lot of information was introduced from Joe Hill’s book series. As the season progressed, things started making more sense for most of the characters involved, although the background of villain Charlie Manx (Zachary Quinto, chewing up every scene he’s in) still involves fuzzy logic. The story’s hero, Vic McQueen (played by Ashleigh Cummings), has high hopes and dreams to escape her blue-collar New England town, but when her young friend goes missing, she learns the unnatural abilities that she’s still trying to control might just help save a little girl’s life.

“There are people with abilities in this world that are way beyond your comprehension.”

Jahkara Smith’s purple-haired medium, Maggie Leigh, is my favorite character on the show, although she’s not the primary protagonist. Her ability as a psychic to ask any question and get a true answer spelled out before her via Scrabble tiles has assisted local authorities with complex cases, but it’s her ability to rip the thread between time and space that will help Vic (aka The Brat) stop the undead Manx, or so she thinks.

Both Maggie and Vic have drawn loved ones into their drama, getting them hurt or killed in the process. While Bing Partridge has literally gotten himself onto the naughty list, it’s The Brat who should be on it. Unfortunately, there’s something off-putting about the character. At times she’s the social-justice warrior for others, while being selfish with her parents. She’s dying to improve her future, but cannot do it without committing a felony and possibly getting her family into even more trouble. On top of it all, she’s gotten pregnant by her long-time crush, who was killed defending her honor. It’s complicated, to say the least.

By the time time the season finale wrapped, she’s chasing down a bad guy while taking in a protegee, as the series veers into superhero territory. I’m not sure if Season 2 will be more like Split or Glass.

“The road to Christmasland is paved in dreams…”

The special effects for Maggie the Medium’s Scrabble tiles are nice, but also simultaneously a little freaky. As much as I like her character, the classic car seems to be the biggest star of the show, so it comes as no surprise as The Rolls-Royce Wraith gets a backstory with Ghost, which drives the storyline for NOS4A2.

AMC recently confirmed the show has been renewed for Season 2, which will involve a time jump, much like the source material. While I like the creepy, cryptic elements of the storyline, I wish somehow a new main character could be introduced — maybe someone from Hill’s other books could get involved and then take over? Maybe Maggie could take the reins. Or, even better, maybe a character could crossover from his famous father’s novels (which have Easter Egg appearances in Hill’s books): Stephen King.