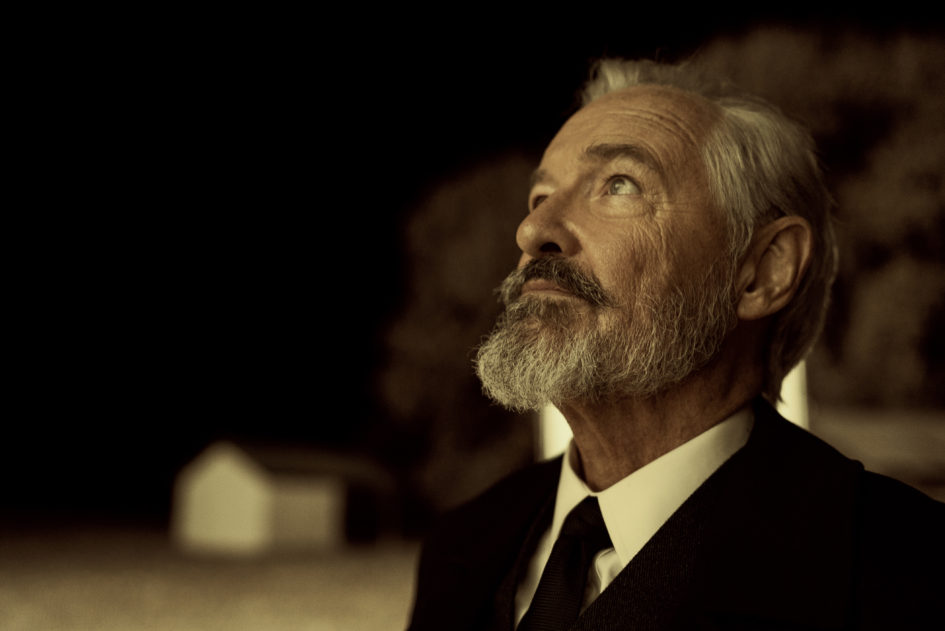 Per Matt
Life is complicated, and as the characters of the EPIX TV show learn the hard way, nothing ever happens according to plan. Eventually, though, they get into the rhythm of Season 1 in Perpetual Grace, LTD, which only leads to bigger problems down the line.

By the time the season finale, “A Sheriff in the Era of the Cartel” wraps, four ex-cons and a corrupt Mexican cop learn their lessons the hard way. It all goes down at the funeral of Ma and Pa, which is where the episode ends in an epic cliffhanger… especially since those two characters aren’t really dead.

Paul (Damon Harrimon) is the disillusioned son of Ma and Pa, who was kicked out of his house at age 15 for wanting to become a magician. He seeks a hired gun to kidnap them while visiting Mexico in order to do something good with their church’s money, which he says was stolen from its members. James (Jimmi Simpson) is a former firefighter suffering from PTSD who would like to make amends to a former coworker as a secret benefactor, but not until he has access to a large amount of money. New Leaf (Chris Conrad) wants another go as a Lenscrafters franchisee and will stop at nothing until reaching that goal, ultimately making his recently deceased parents proud. Glenn Pirdoo (Dash Williams), the 15-year-old uneducated pawn-shop employee, just wants to be one of the “Special Boys.”

As previously mentioned, the pilot introduced these shady characters, each one haunted by dark secrets. But it’s the Texas Ranger, Wesley Walker, who’s the true hero here (Terry O’Quinn Brings Justice to Perpetual Lawlessness). Walker, Texas Ranger knows something bad is happening in Half Acre, New Mexico, but he’s not exactly sure what that might be. Through trial and error, the cold case that he’s reopened has made a little progress, but he’s simply run out of time before returning to his jurisdiction.

Be prepared to take notes, as the twisted storyline involves attempted murders, identity theft, dealing with a drug cartel, blackmail, kidnappings, hidden secrets and a few magical surprises along the way. Everyone’s got big plans for their share of the $4 million they’re about to steal, but is the money trail simply a trail of tears?

“All life will change… if loved.”

Forever is a long time, but “fiveever” is even better, as a new word is coined and a complicated season of storylines nears the finish line. It’s just too bad that Luis Guzmán’s aspiring writer didn’t survive. While morally ambiguous, he often provided ridiculous laugh-out-loud slices of life to enjoy. Sir Ben Kingsley’s character has a background that’s more than meets the eye, here. While I don’t necessarily like Pa, I love to see and hear the Oscar-winning actor curse like a sailor.

Part of the charm of Perpetual Grace is having Jimmi Simpson talk his way out of trouble and watching Terry O’Quinn untangle the web of lies wrapped around each one of the bad characters.

There’s so much sleight of hand going on, the overall storyline feels emotional, hopeless and is hard to watch at times. Fractured and abusive relationships move to the forefront, with many of the main characters justifying dishonesty. This show seems to follow the criminal theme of Get Shorty, which feels like a spiritually related companion series. Maybe there should be a crossover episode, at some point.

Should the show get renewed, it’ll take a momentous effort to get these shady characters back on track, as it feels like the filmmakers have written themselves into a corner. Hopefully, that’s not the case.

If you don’t receive the EPIX station in your cable or satellite package, you can use the EPIX NOW app for Apple and Android devices to watch the channel’s premium programs, featuring Pennyworth‘s reimagined Batman backstory, Season 1 and Season 2 of the taut spy thriller Deep State and the excellent docuseries, PUNK. It’s $5.99/month, but users can get a free seven-day trial. So, there’s no excuse in missing out on all of the channel’s featured programs.