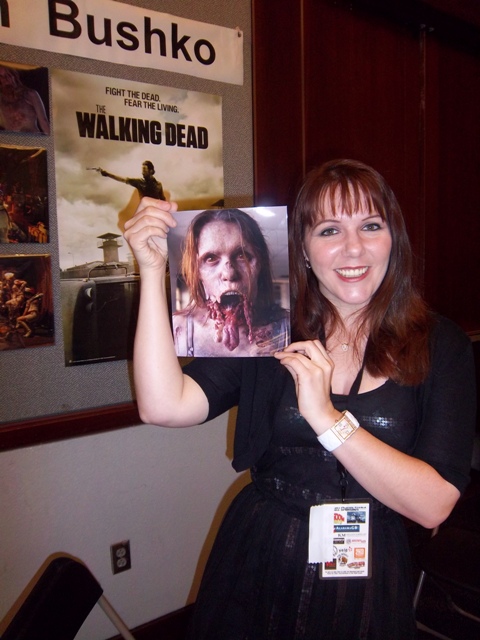 Per Matt
Erin Bushko is a busy, busy person. When she’s not working on The Walking Dead, she’s running a costume company, a clothing-design company and touring the country for four months with the Georgia Ensemble Theatre. But when she finds a little bit of free time, she’s appearing at conventions to host panels focusing on steampunk, costuming and even Zombies. Recently, at the Alabama Phoenix Festival, Erin spoke to me about working on each season of The Walking Dead, educating and entertaining children via a touring production and getting up close and personal with Norman Reedus, after her Jawless Zombie was killed by him.

How did you initially get involved with The Walking Dead?
– “I had actually worked with the casting company for probably two or three years before Walking Dead ever came around. I had gotten a part in Zombieland and a couple other horror movies. So, they were like, ‘We know that you can attack a camera and you’re OK with the make-up effects and the lenses.’ That was No. 1 on their list, because you have to be OK with it when you’re doing The Walking Dead. So, they were like, ‘Are you interested? Come on in, do the Zombie Class. Greg Nicotero actually came out, after we did our class and said, ‘I love you. You’re at the top of my list. We’re bringing you in.’ That was really nice because Greg is amazing and an idol of mine.”

After working on Zombieland, how did you learn about The Walking Dead?
– “I had heard, through a friend of mine who was a special-effects makeup artist, Greg was working on a new project. He was like, ‘I know you’ve done Zombie stuff. There’s talk they might be doing this thing.’ I was talking to the casting people at another production. If you know people in the business, it’s a lot easier. And if you catch it right in the beginning, you can get in on the ground floor. I’ve been doing it since Season One now, all the seasons. They just keep bringing me back, which is great.”

Tell me a little about Zombie School, since some people trained and others did not.
– “Everyone who did probably the first four or five episodes had to go to Zombie School, because they had no idea what they were going into. It wasn’t in pop culture yet, so people weren’t really doing Zombie stuff. We all had to go through Zombie School. Once they had their core group, I don’t think they even did it for the second season. I think they just brought people in, assuming when you get on set you can walk and we’ll put you in front of the camera. But I know they went back to it for the third season, because they wanted to refine the movement. Not everybody went through it. It takes a lot of time. When I went during the first season, I was there probably four or five hours. You fill out all your paperwork, you try on different costumes to see what styles work on you, they measure your eyeballs to see which lenses are going to fit you. So, it’s not just the training on how to use your body, but it’s all the little details: the prosthetics they use to put on your face… they have to fit your face shapes.”

“For the actual schooling, they start out with, ‘Show us what you got.’ Some detail work. You don’t want to do the same thing over and over again. That was my problem. I was a dancer when I was younger. I walked very rhythmically. It’s a lot about loosening your body. The thing I think of, every time I do it, is if you’re dead, your muscles aren’t connected any more. Not everything works. Just making sure that you’re loose enough.” 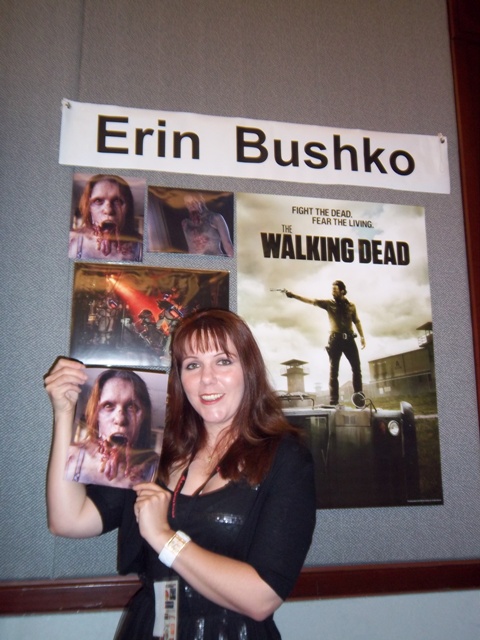 Since you’ve worked the show from the beginning, could you compare each season?
– “I don’t know. I really enjoyed the first season because it was so much discovery: the cast, the crew, the art departments, the makeup effects. You could see them discovering new things. I don’t want to say anything bad, but I didn’t really like Season Two. I felt they went a very different direction with it. As a personal opinion, I didn’t find it as entertaining. I love Season Three. Season Three had so many surprises that you didn’t even see on set. They’re very secretive about a lot of things they do, so you’re only brought in for your particular part. I just love being surprised by everything.”

Can you tell me a little about your featured character, the Jawless Zombie?
– “In Season One, episode four, they’re looking for Merle in the business office. I’m in one of the offices. Norman Reedus walks in with his crossbow and I turn around. I’ve got no jaw; the tongue is hanging out. He shoots me, straight through the forehead. That was really exciting. He actually came up afterwards and said, ‘Can I get a picture with you?’ So, he puts his arm around me. Luckily, I had so much makeup on, you couldn’t see my face. He pulls out his cellphone and takes a picture and puts it up as his cellphone wallpaper.”

It seems the number of onscreen Zombies varies each season. At any given time, how many actors are lurching around?
– “When I was featured as the Jawless Zombie, I was the only Zombie onset. There were days in Season One, where we’d have 200 people onset for these massive hordes of Zombies. You get there at 4:00 in the morning, they spent half an hour in makeup and you wait five or six hours, till they get 200 people through makeup. Then you’re onset for 12 hours in the hot sun. Those days are really tough, because it’s hard to treat everybody like a movie star.”

What other projects are you involved with?
– “Between January and May, I do a really amazing show called And Then They Came For Me. It’s a show about the Holocaust and it’s aimed toward Fifth and Eighth Graders. I tour all around the South with Georgia Ensemble Theatre. It’s based off the story of Eva Schloss and she’s still alive. She survived the Holocaust. I play her at age 12. We tour schools, churches, museums, pretty much anywhere that wants to book us. For about two months we travel all over the South and the Southeast. It’s such an important show. It’s very intense. It gets to be a little difficult, because it is so emotional. I take time off from doing film to do that, because it is so important. Fifth Graders can’t believe it. They’re just astounded that someone would do something so awful.”

Will you be attending any other conventions anytime soon?
– “Shameless promotion for a minute. I have a costuming company called Belle Rogue Costumes. I do private commissions and I do film and television. I’m designing for a feature film right now. I also have a company with my best friend, Quirky Skirts. We do really fun skirts. We also do aprons and hair accessories. We do really odd prints. It’s hard to find things girly but in the theme you like. The next convention we’re attending is Goo-Con. It focuses on prop building, costume building, molding. I’ll be at DragonCon this year. I’ll be doing panels strictly for the alternate-history track. I do a lot of steampunk stuff and costuming, as well.”