“All in all, it’s a fine day for an Apocalypse.” 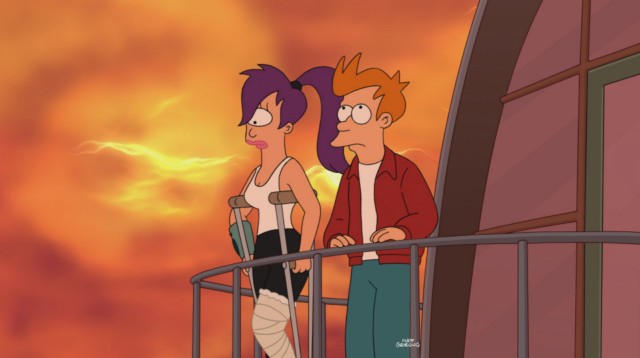 In a desperate attempt to clean out my Tivo (and to cash in on all of The End of The World nonsense), I finally got around to watching the Futurama episode, A Farewell to Arms. This WGA-award-winning episode depicts an end-of-the-world scenario just as in the year 2012. I Can’t Get Enough Futurama.

“The Sun will erupt, all will perish… blah, blah, blah.”
“A great cataclysim will destroy the world in the year, 3012!”
“Is it just me, or is the world ending more often, these days?”
“This is the end of the world!”
“One of the hundreds of contradictory prophecies is coming true!”
“So, the world will end in 3012, why does that year sound so familiar?”