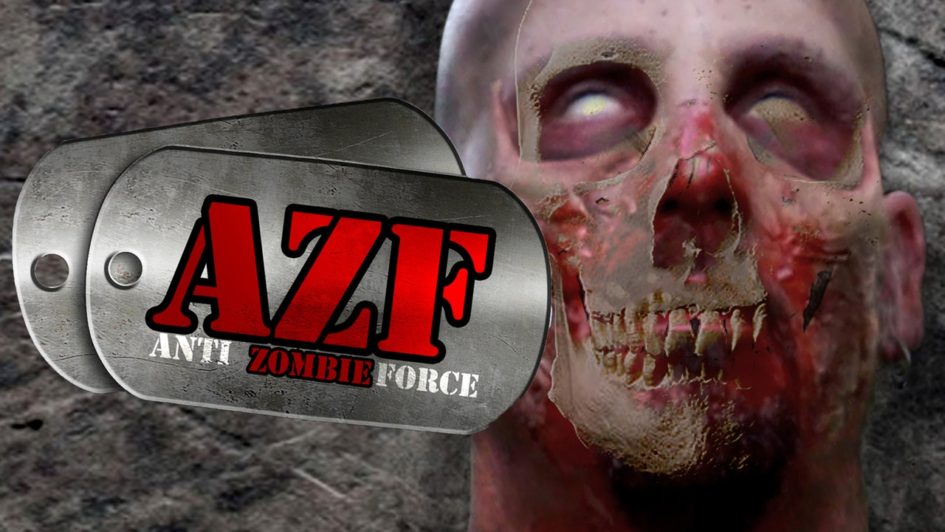 Anti Zombie Force is the latest Zombie movie acquisition by Troma and, well, as the second Zombie film I’ve reviewed in recent months for ZIMB, I’m just going to come out and say I’m a bit disappointed. Making a film is a long, arduous process that takes time, talent, money and a lot of heart. In that regard, I try to always find the good points of a film and sing those praises, rather than harp on the bad. After all, there are more than enough film critics out there destroying cinema and filmmakers to feed their ravenous, bloodthirsty audiences. I want to champion independent horror wherever and whenever I get the chance. But damned if Anti Zombie Force doesn’t make that a challenge from hell.

Anti Zombie Force, or AZF for short, is about exactly what it sounds like: a group of people who go around dispatching Zombies. The problem is that the tone and structure of this movie makes it feel like some bastardized, low-end version of The Walking Dead meets The Expendables. The premise, itself, isn’t new, but it also isn’t bad. If executed right, the idea of some interpersonal drama mixed in with high-octane action, gun play and gallons of gore can be a mindless, but exciting hour and a half of entertainment. But the melodrama is too high, while the quality of the dialogue and skill of the performance, itself, is subpar. But it isn’t just the acting. The characters, themselves, feel like caricatures of tropes from action movies, with names fit for an equally low-budget porno, such as Lt. Col. Lance Justice.

The plot to AZF feels as half formed and underdeveloped as the characters. The characters go out in search of a researcher, who may have the cure to ending the Zombie plague and are quickly embroiled in the sort of stereotypical shenanigans you’d expect, as well as cuts back and forth to try and fill in the practically non-existent backstory of some of the characters. There’s also our crazy, torture enthusiast, Norman Reedus impersonator who offers us a full-frontal nude scene, as he tortures a woman in a poorly lit storage unit before being called upon to try and be a hero.

I watched Anti Zombie Force twice. I came at it from every angle I could think of, in hopes of finding something positive and uplifting to say about the film. Even trying to find words to fill this article is a struggle. In short, it’s a bad movie. It’s derivative, uninspired, unimaginative and peopled with characters and story elements that do absolutely nothing to interest or engage an audience. I’ve said it before and I’ll likely have to say it several more times before I’m done. Production value doesn’t matter. You can shoot a movie on an old VHS with a cracked lens and as long as you have either a good story, some good performances or some decent effects, you can still create an entertaining movie. Anti Zombie Force looks and sounds like it was recorded on a digital camcorder, has Zombies that look more like junkies wearing Dollar Tree Zombie makeup and has acting that wouldn’t land you a role in a grade school Christmas pageant.

Troma has a motto: Just make the damn movie. For living up to that motto, I’ll applaud the cast, crew and creators of Anti Zombie Force. They most definitely made the damn movie. As an amateur filmmaker and screenwriter, I also applaud them for this. But as a fan of horror movies, especially the super low-budget, cheesy B-grade monster flicks, I understand where they were coming from and what they were trying to do. I hope they take this concept and rework it, make it into another film with a better script and more fleshed-out characters and plot points. As it stands now, I’m think it’d be preferable to let the Zombies win this time.