Ashy Slashey is a Daddy! 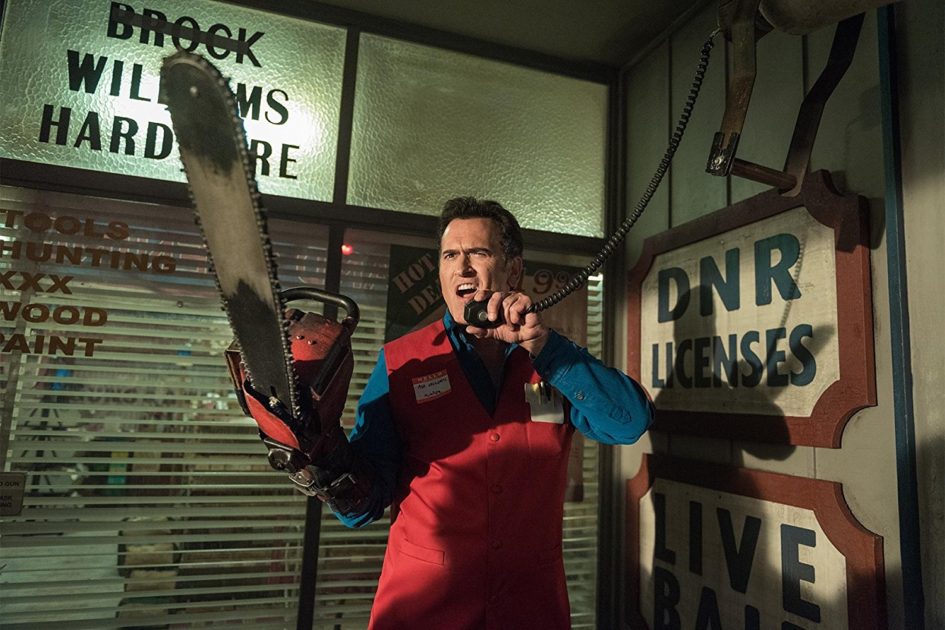 The main problem I have had with the new Ash vs. Evil Dead TV show is, it just doesn’t seem to quite match with the movie versions of the Ash character. Sure, Ash was always devil may care, but I never thought of him as a loser until this show. I think I have just given up on understanding the canon of Ash vs. Evil Dead, which is all over the place and also crosses multiple horror subgenres, and just going with it. It’s much easier if you just let it happen.

Season 3 picks up right where Season 2 left off: Everyone is happy and living out their dreams. I mean, we all know that isn’t going to last for long though, right? This time around, it lasts for about five minutes before someone reads from the Book of the Dead. Just like someone always happens to read from the Book of the Dead. The gang then gets reunited (per usual) to take care of business… Oh, and Ash finds out he is a father. He is also a husband, apparently. It’s somehow not at all unrealistic that he doesn’t remember being married or know about having a daughter. After all, who can blame him, what with constantly saving the world from evil Deadites. It seems like we have already seen that father-child relationship as Kelly and Pablo become like children to our unlikely hero. So, was the addition of a daughter necessary to the story? I’m interested as to how this is going to be worked into this season.

Ruby is back — this time as a blonde who might be impregnated with some Ash DNA — but we aren’t completely clear on that just yet. This season also adds Kelly’s friend, Dalton, who is the leader of a group called the Knights of Sumeria. He is a big Ash fan and has been training to fight the evil dead his entire life. This also puts a possible triangle into the story between Kelly, Pablo and Dalton. It was made fairly obvious that Kelly and Pablo had a romantic interest in each other last season. This season is already chockfull of slapstick gore and over-the-top violence, but true Evil Dead fans wouldn’t have it any other way.

If the show will be coming back next year is still in lingo. It is the top pirated TV show right now and unless Starz can get more original subscribers from the show, it may not be coming back for another season. However, fans will be impressed to learn Bruce Campbell has stated that another Evil Dead film is not out of the question. This season, our lovable losers will probably rehash some of the same emotional issues they had in Season 1 and Season 2, but that’s what gives the show its heart. Logic, meh… that just gets in the way of a show like Ash vs. Evil Dead. So, I wouldn’t come into this season with any expectations of continuity. I also might not try to get to involved with any characters that aren’t Ash, Pablo, Kelly and Ruby. Sure, this season has added new characters, but in the past, only our four main characters have any certainty of living past a few episodes.

Ash vs. Evil Dead is on Starz Sunday nights at 8 pm Central.