Bandersnatch: Is It Worth a Dive Down the Netflix Rabbit Hole? 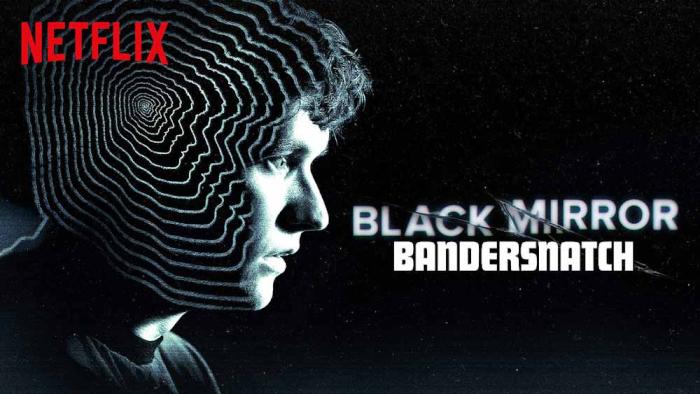 Bandersnatch, the new interactive Black Mirror special on Netflix, is a clever and trippy take of a choose your own adventure movie.

For those unfamiliar with the Choose Your Own Adventure children’s books from the 1980s, the reader is presented options down an ever-expanding decision tree, leading to various endings scattered throughout the novel. Some endings are good, others end in death, others mediocre. Bandersnatch follows a similar concept. The viewer is periodically presented with two options for the main character to follow. The viewer has 10 seconds to choose either of the two choices. If neither is chosen, the first option is selected automatically. Certain sets of options may explore completely different storylines. This allows for multiple viewings to see all the various endings of the story. But there’s a significant difference between the books and this movie.

Where the Choose Your Own Adventure novels felt more like a game, where the reader is trying to solve a mystery or reach an optimal ending, Bandersnatch doesn’t have an objective. There is no solution. And being the dark, dystopian Black Mirror, the endings are far from optimal.

Without giving too many spoilers, Bandersnatch takes place in 1984 England, following a 19-year-old budding video game programmer named Stefan Butler. Butler is creating a video game version of a choose your own adventure style novel, Bandersnatch. What happens from there is up to the viewer, as the reader’s choices develop more backstory to the characters and the world they live in. Finding out the history through viewer choice is part of the fun of the film.

The movie is drenched in ’80s aesthetic, like a cheap knock-off cologne. Music and fashion seem to hammer home this point. Although that same music tends to be a guiding force, not just in establishing the time setting, but also in giving the viewer a choice in soundtrack. Some of the viewer’s choices revolve around what music Stefan will listen to. And those choices, while not significant to the plot, make call backs periodically.

But it’s the lack of significance of the choices that creates an illusion of choice. You choose your breakfast, you can choose the music and yet sometimes, you cannot opt out of two equally horrible choices. This is Black Mirror, after all.

Incredibly enough, the film is hyper self-aware and breaks the fourth walls in ways above and beyond Deadpool or the animated Teen Titans. Rather than addressing the audience directly, the film brings the viewer into the film, as the viewer’s choices sometimes communicate directly to Stefan. It really encapsulates the concept of how a work of art can be “meta” or self-referential, during the course of the repeated viewings. The relationship between the viewer and Stefan becomes more intimate, which made me feel more guilty as I made Stefan do terrible things just to see the multiple endings. The film dives deep into the concepts of free will and multiple timelines as we explore this book within a game, within a movie, within your living room.

You will want to follow Bandersnatch down every rabbit hole it offers. Don’t expect anything groundbreaking or innovative, but the movie is smart and original enough to spend two hours following the various paths to view the multiple endings. Then look up the missed endings online and watch it again with a decision cheat sheet to watch those missed endings. You’ll never look at Pac-Man the same way again.