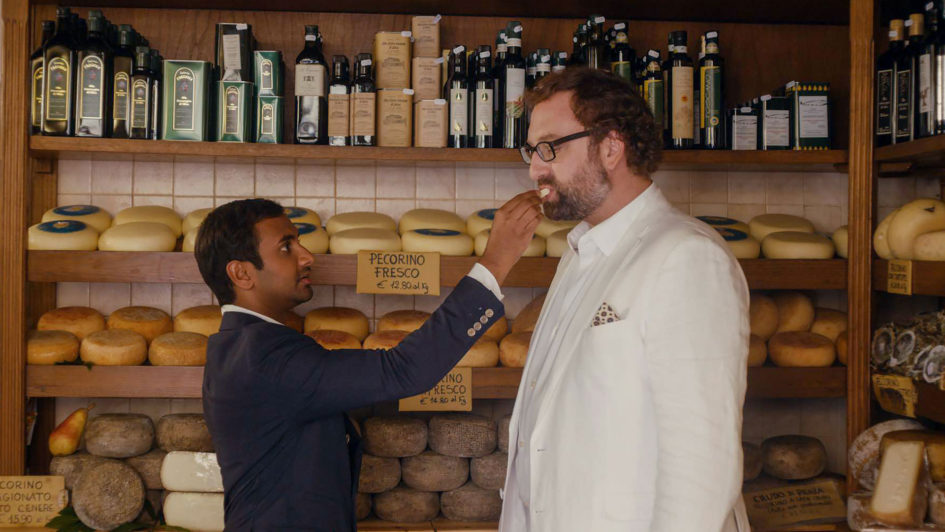 Aziz Ansari and Eric Wareheim in Season 2 of Master of None, currently streaming on Netflix.

“Whoa, so you’re like the “Winter Soldier?” Aziz Ansari’s character, Dev, asks his hot date, after she remarks how much metal is in arm after surgery from a car accident. “Who’s that?” she asks, and he launches into a long-winded nerdy explanation.

Which is exactly what I would do.

I wouldn’t care that we were all dressed up at a swanky roof-top bar in New York City. If a girl doesn’t know who a comic book character is, I’m gonna tell her. Which is one more reason I relate to and root for our man, Dev, in Master of None. He’s not the most handsome or charming, and may be a little over-eager to make the girls laugh, but he is funny. I’ll get behind a funny, nerdy, main character any day.

Fortunately, his date only gently chides him for bringing up comic books. They laugh it off and the rest of their date goes well. But it’s the only date that episode that goes well.

Most of Season 2 takes place in the Big Apple, but there’s a few episodes at the beginning that take place in a small town in Italy. Dev has gone there to learn how to make pasta from a little old Italian grandma with her own shop. He gets good, but decides not to stay in Italy and open his own restaurant. Jack of all trades, master of none. But while he was there, he befriends and develops feelings for her beautiful thirty-something-year-old granddaughter. Of course, Francesca has a serious boyfriend. This scenario hit me right in the feels, although the girl I was thinking about spoke French, not Italian.

Anyway, when Francesca and her boyfriend visit New York from Italy, she and Dev find themselves spending a lot of time together. Her boyfriend is always in meetings or traveling for business, so Dev plays tour guide for her while she’s in the city. They go to a wrap party, visit a TV set and go on a helicopter ride. He’s got feelings for her. She may have feelings for him, but she’s just gotten engaged. Things become interesting.

Episode four of Season 2, titled “First Date,” may be one of the strongest episodes this season. It shows Dev having a series of dates with women he’s met on a dating app. We get to meet all the different women at the beginning, and as the episode progresses, the scenes cut to him with the different women. Since all the dates take place at the same locations, it almost feels like one long date, but with different dialog. A very clever concept.

Unfortunately, not all the dates go so well. In some, he doesn’t hit it off with them and some of the gorgeous millennials are the horrible, self-absorbed people we’ve stumbled across and some others share TMI from other dates.

When he does stumble upon a fellow nerd, it doesn’t work out. They’re chatting about their favorite ramen noodle shop and she shares, “So, I’m sitting in front of the PS4, look at the clock, and realize I’m eight hours deep into an Overwatch sess. I’m starving by then, so I go over to my ramen place, Mr. Taka.”

Even after a connection over favorite food joints in NYC, the date crumbles when he finds out she’s using the app for frustratingly hilarious, incorrect reasons. Which is too bad, because I like the reference to Overwatch. I don’t know that I’ve ever had an eight-hour long session, but I’m pretty sure I played close to five hours on Saturday. I didn’t fast the whole time, though, I remember making a sandwich between matches.

If nothing else, I think this episode gave me some ideas of where to take a girl on a first date. It might also have given viewers some ideas of what to type as an introductory message to your match and what to type at the end of an evening. You know, when I think about it, I don’t believe any other series has shown the struggle of modern-dating culture via these apps. Even though I don’t use them, I have a surprising number of friends who do. Master of None grasps its age-group audience of millennials better than any show I’ve seen.

But the TV show isn’t all about watching Dev’s dates go down in flames. Each season has a romantic arc of sorts. He also has a group of three close friends — which kind of reminds me of Seinfeld — as they say the most inappropriate, funny things or get themselves into wacky situations. He’s also a young actor in New York City, which gives a unique take on a premise that would ordinarily be placed in Hollywood. For most of Season 1, we see behind the scenes on set, where he’s landed a small part on a Zombie film.

We get to see Aziz Ansari interact with other actors who play a version of themselves between takes. Some are vaguely familiar, like the guy who was another MI-6 agent in the James Bond films with Pierce Brosnan. The actor was also the leader of the strike team in the first Resident Evil movie. However, my favorite actor interactions are those with H. John Benjamin, who voices the main characters in Archer and Bob’s Burgers. Listening to this guy talk is hilarious, and the answers he gives Dev for relationship advice are priceless. I was delighted when he turned up again randomly toward the end of Season 2.

It’s fun to laugh along and root for the little guy, and even if you don’t, it’s fun to try and pick out all the movie references. Sure, the show plays homage to two Italian films I only recognize from The Criterion Collection, but there’s plenty from American films. I’m pretty sure that there’s some homage played to Woody Allen’s New York films like Manhattan or Annie Hall. There are some scenes where the camera follows Dev through the kitchens and restaurants like in Goodfellas. But fans of the gruesome will probably enjoy the horror dream sequence where Francesca literally tears out Dev’s heart, like in Indiana Jones and the Temple of Doom, and then tosses it into a wood chipper like in Fargo. Enjoy the all the blood and gore.

Whether you’re on the lookout for movie references or just want to laugh, it’s a fun show to watch on Netflix. I found it hilarious and over a weekend, it’s easy to find yourself binge-watching Master of None.