Bruce Campbell Rejuvenates Ripley’s Return: Believe It or Not! 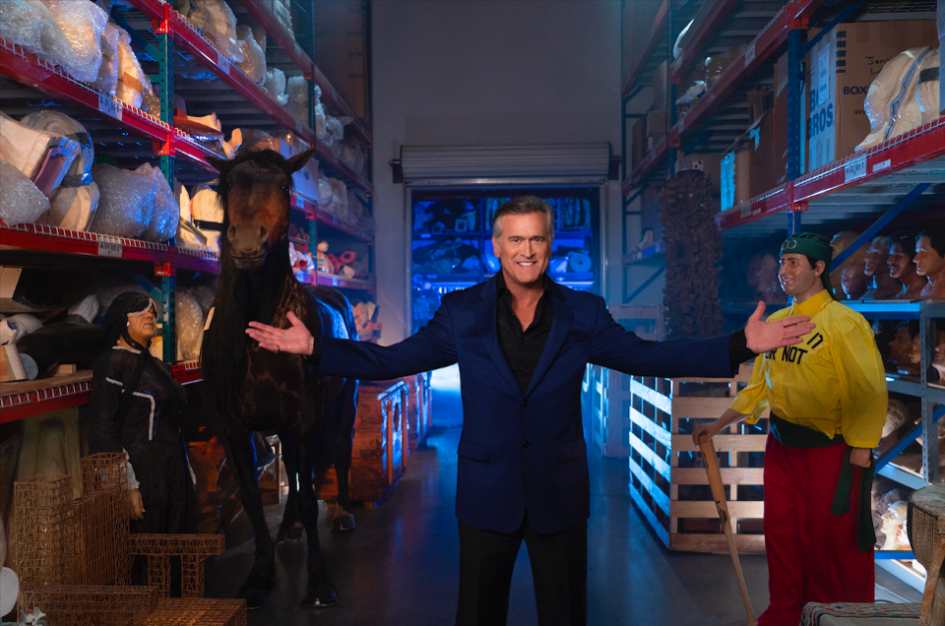 Per Matt
Ripley’s Believe It or Not! returns to the small screen in part as a celebration of Robert Ripley’s exploration of the world’s strange and unusual. Actor Bruce Campbell helps bring this contemporary approach to life as both host and executive producer, which airs on the Travel Channel.

Season 1 will consist of 10 all-new, one-hour episodes using a documentary style to tell the stories of the strange, unusual and bizarre. The TV show will be shot on location at the famous Ripley Warehouse in Orlando, Fl, featuring one-of-a-kind stories from all around the world. This series also celebrates the 100th anniversary of Ripley’s Believe It or Not! There will be odd and larger-than-life characters, bizarre history and unusual science trickling into each episode.

The pilot, “Natural Born Thrillers,” featured World Record Holder Rick Smith, a magician who can accurately throw playing cards up to speeds of 92 mph. Kimberly Weglin is a highline athlete whose wedding was held 800 feet above a river inside a Utah canyon. Sword-swallower and “mind over body” performer Dai Andrews highlighted his unusual talents, performer Tyler Scheuer can seemingly balance ANYTHING onto his face, motivational speaker/World Record holder Brian Jackson lifted a 5,000 lb. truck trailer with his breath alone and contortionist Troy James (aka Twisty Troy or The Human Pretzel) showed off his hyper-flexibility.

It’s great to see a new version of Ripley’s sensibilities return to television. I always enjoyed watching the ’80s series in syndication, which felt timeless, in a way. I’ve been even more interested in the real-life adventures of the man who discovered these people with strange abilities. The book A Curious Man: The Strange & Brilliant Life of Robert Believe It Or Not! Ripley was a fun read, but I was actually hoping to get a little more of Ripley in this new docuseries. This version of the show brings to light all true and real stories, while the previous version that aired on ABC contained a variety of unusual vignettes, as well as quizzes used to pick out the true events. I wish this version incorporated that interactive setup in some way.

Campbell’s contributions are minimal as a host, basically appearing to introduce the next performer, but his responsibilities may be greater behind the camera. As a hero to horror fans everywhere, his performances are well known as Ash Williams in the Evil Dead movie series, as well as the Ash vs. Evil Dead spin-off. He can easily bring in an audience who might not normally watch this kind of show, but he doesn’t really get enough screen time to showcase his conniving humor that horror convention fans know all too well. As an executive producer, he probably has more control of the series, making many decisions off camera and his publicity appearances to promote the show can be just as helpful for growing the brand. I just wish there was a little more pizzazz happening on the screen.