After a Summer of World-Class Fandom Conventions in Nashville, Can Wizard Deliver? 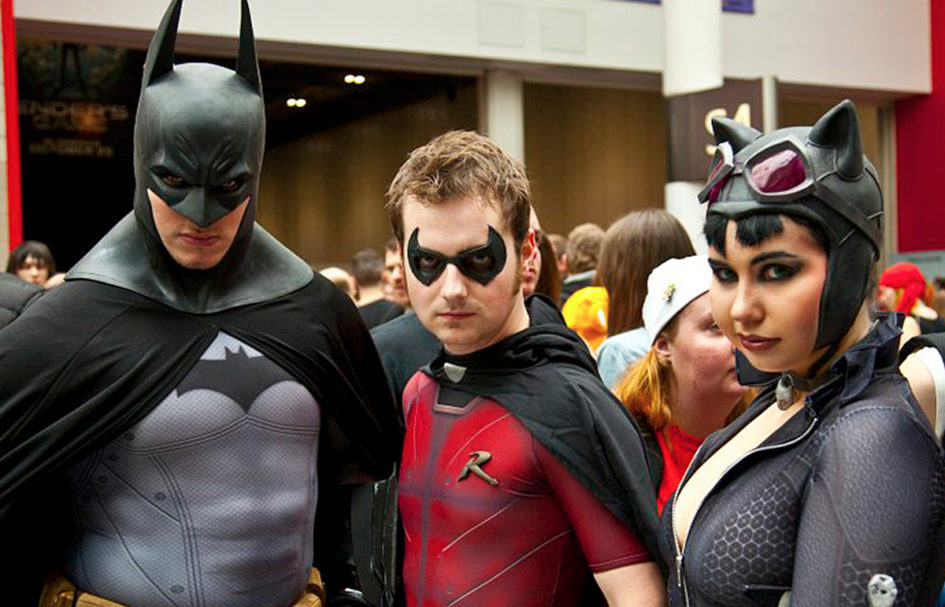 It is fair to say these days that Nashville is a city by which many things can be measured. Like the exploding food scene, hospitality industry, real-estate boom, and so much more going on in Music City, the fandom community has spent 2017 on a whirlwind tour of that which one used to have to travel to “bigger” cities for. Fans of genre fare in Nashvegas learned this year that Wizard is not the only game in town (from out of town), when it comes to big, corporate fandom shows. In fact, they learned that there is a lot more to be had than what the struggling giant brings to the party — from larger events to more modest locally based productions.

Last weekend, Geek Culture in the Southeastern United States rallied to Dragon Con in Atlanta. Having just completed their largest and most successful show, Chicago Comic Con, the Wizard team has just one weekend off before making a pass at Nashville fandom, with a celebrity lineup redundant to those who will barely be recovered from said party in the ATL. In fact, similar to their ill-fated attempt to horn into the Atlanta market directly, it would not be surprising to see this latest Wizard flop here in the birthplace of Hot Chicken and Opry stardom.

Nashville has already proven a tough town for the Wizard team. They opted to skip out entirely in 2016, having seen a lackluster showing of less than 5,000 attendees in 2015, and weathering a less-than-warm reception in the years prior to that. By no means should headcount matter most when evaluating a con, but when your marketing leans on the notion of “tens of thousands of your fellow fans!” delivering tens of hundreds is embarrassing.

Can Wizard turn Nashville into a worthwhile venture this year, driving their show with guests who will have literally just left Dragon Con (such as Stan Lee) or those like Nichelle Nichols, who’ve been repeat guests of the Atlanta standard-bearer? Is Nashville going to be tempted by the same dealer and artist fare as they’ve seen at other shows this year? Will the admittedly rare appearance of Val Kilmer make Wizard hold their own?

Our city has been fortunate to host a who’s who of quality shows in 2017, both locally organized and touring. Here’s a rundown of what Wizard has to live up to.

Fans of The Walking Dead in all its forms descended on the Music City Center in June, a venue which has a torrid history of dubious honesty with local fandom, but has been a friend to anyone with a big enough checkbook. In the case of Walker Stalker, the event is a bit of a hybrid of local and touring. The company running the show is based in Franklin, TN, and they trace their roots back to a podcast by the same name. After doing a one-off event tied to the podcast, it became evident that a touring event would succeed, and a business was born from fandom. That’s a story most people in geek circles can respect, and the culture of Walker Stalker shows those roots quite clearly. Combine that with an excellent branding effort, quality show-graphics, and a layout that keeps their entire program on one exhibit floor (instead of being lost in the bowels of the venue like Wizard’s panels) and you have a great event for even the casual Zombie fan. To keep diversity in the mix, the Walker Stalker show tends to also feature talent from other horror and darker fantasy franchises, including the gray-shaded spin on Batman’s origin — Gotham. While not as overpriced as Wizard, Walker Stalker will set fans back a decent amount in door costs and the array of photo-ops and autographs available; however, they work for it — and the fans clearly came to spend for the keepsakes they were seeking. 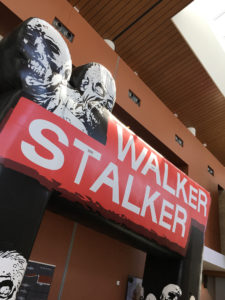 Walker Stalker’s sense of identity is strong and on display. 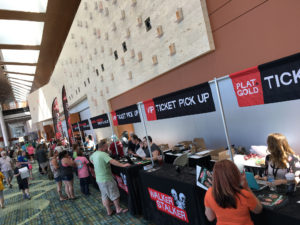 The show is efficient in processing a ton of eager fans. 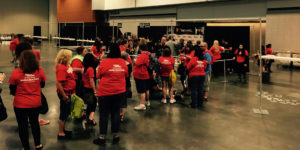 Notoriously one of the hardest-working guests, and nicest guys, Michael Cudlitz stayed well after the floor had closed to sign for each and every volunteer.

When it comes to Nashville’s locally produced fandom events, Hypericon is the horse to bet on. Built as a rebranded modern upgrade to an old-school traditional fannish convention, the new and improved Hypericon benefits from its 12 years of life, as well as a combined set of decades in skill and experience from its staff. The Hypericon team is the most experienced in the state, if not the region, and the upward trajectory of Hypericon has been evident since year 11, when the “Next Generation” initiative was launched. Easily outpacing the large touring shows in variety and originality of events, and running around-the-clock with a healthy representation of diverse fandom interests, this multi-genre convention is becoming a must-do on the lists of gamers, cosplayers and geek partiers throughout the region. The Father’s Day weekend show is operated by a non-profit organization who funded the expansion on a novel effort of fan investment memberships — The Infinity League. The program was so popular that they’ve decided to launch another round of fan investments called the Fellowship of Infinity. Both involved the convention’s transferable lifetime badge — The Infinity Membership — and the two groups are themed to the Marvel and Lord of the Rings franchises, respectively. Attendance is tiny compared to the thousands at the corporate shows, but like many local events, the focus is on quality — both of attendees and content. Though this local show doesn’t begin to scratch the surface of the famous guests at a corporate show, the cost is incredibly fair for a solid three days of entertainment and social scene. 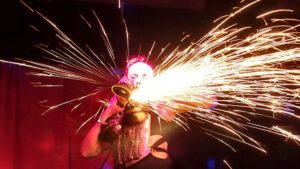 Sparks fly at the Friday evening cabaret show, as a grinder performance lights up the Hypericon stage. 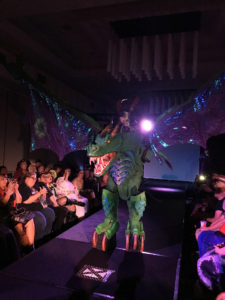 The winner of the Hypericon Cosplay Showcase — an incredible one-man Dragon Rider — takes the runway. 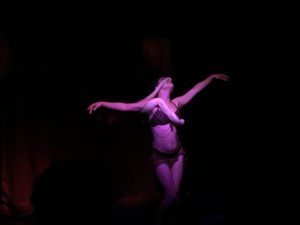 Also among the cabaret performances was an act with a live albino snake. Make your own anaconda jokes here.

Possibly the most exciting convention debut in recent memory, the Con of Thrones launched in Nashville this summer at the end of June, at the Gaylord Opryland Resort. With a somewhat slow start, the weekend hit a healthy stride of attendance and boosted some very quality fan panels and main events. Their celebrity guest list was a bit mediocre, compared to the superstars who might have been in attendance, but as a first-year event, they held their own and offered some thrilling interactions for fans. As with many first-year events, the dealer room was sparse, but the impression left by this show will guarantee traction with more guests and vendors beating down their doors when they return in 2018 — this time, in Dallas. The same folks behind BroadwayCon, LeakyCon (Harry Potter) and GeekyCon operate the event, and they definitely struck this fandom while the iron was still hot. One of the most impressive notions is that this show was sold for many months on an expensive VIP ticket and the promise of a good time, with no content or guests announced. Even the regular tickets still clocked in on the high side, but fans ate them up. It was a good bet, and the show has great branding to thank for the faith they received from fans. Branding is sleek and ideal, and they have certainly marked their territory in the franchise’s fandom culture. Aside from bringing nowhere near enough show graphics, for the giant venue of Opryland, Con of Thrones made a promising showing, and even offered up some good evening entertainment (not a typical strength of corporate cons) and a very well-attended cosplay loaded with premium costumes. 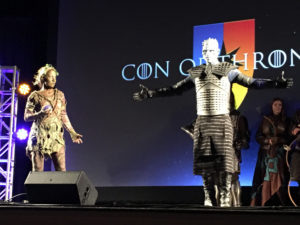 The Night King placed well in the contest, and displayed his “come at me, Snow” pose for the cheering fans. Local effects and makeup pro Rick Prince is the man behind the mask. 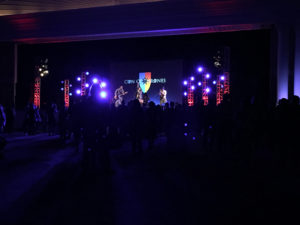 Daenerys and the Targaryens provided musical entertainment alongside several other bands. 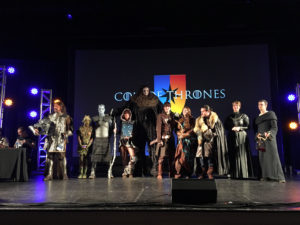 The final lineup for the cosplay included winners “Wun Wun and Archer” and social media staple to the franchise, “Con Snow.”

Leaving a pretty lofty bar set for Wizard to leap, the Heroes & Villains Fan Fest was a huge hit, albeit a bit too similar to its sister event, Walker Stalker. The two are operated by the same group, with some cities offering a combo show for both genres. The same cultural vibe, positivity, energy and sense of identity as Walker Stalker shows through, here at Heroes. If you’re a fan of superheroes (and villains!) in film and TV, this was a great show to peruse merchandise, meet the talent and enjoy some quality panels with favorite actors. Organizers openly avoid the term “convention” or “comic con” for this show, as well as Walker Stalker. They are quick to point out these are “celebrity appearance events” — which is a refreshing stroke of honesty and realism from event producers. It certainly beats showing up with something that is not a “con” and purchasing someone else’s name to disguise your event as such.

A highlight of Heroes & Villains was the Saturday evening party, sold as a somewhat-expensive added ticket, and hosted by Steve Amell’s wine-by-mail brand, Nocking Point. Considering the decent food spread and the endless glasses of Nocking Point on hand; however, this proved to be a very nice affair. Somewhat awkwardly, it took place after hours in the exhibit hall, in the same corner as the main stage and panel area. The walk in was a little off-putting, but once in the event, it didn’t suffer much from the setting. Some more lighting and perhaps draping to box it in might have sealed the deal, but a good cover band combined with actor antics on-stage made for a fun night. Like Walker Stalker, this event has some higher door costs and an endless fortune to be invested if you’re an autograph hound, but they come by it far more honestly and affordably than Wizard. 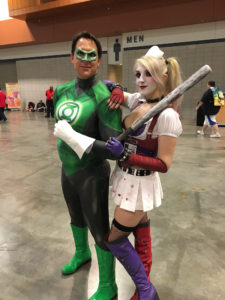 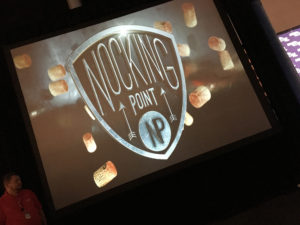 Nocking Point, on-screen at the Saturday night “One Night In Nashville” party. 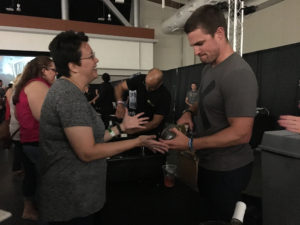 Steve Amell took a good 30-minute shift on the wine-pouring line, serving up his vino personally, to the delight of the fans.

With the exception of the aforementioned Dallas stop for Con of Thrones, all of these shows have announced returns to Nashville in 2018. Assuming Wizard sees their usual low-level turnout in what is now a very crowded market, it is possible they will skip a year, at least, once again. There may be enough fandom to go around, however, and since they are not shy about dumping cash at the last minute into TV ads, Wizard might pull off something that makes Nashville worth it for them.

Nonetheless, the local events and the quality shows that have come through know that Nashville is loaded with vibrant fans of all types and can be a destination draw for the region, when cons and events are done right.

The ball is now in your court, Wizard. Will your famous reputation for predatory timing, gouging prices, and prevailing financial woes cause a hindrance to your Nashville efforts, or will there be enough people who haven’t already met your roster of talent at Dragon Con, and who are not already full on the buffet of quality events this summer pay off? We will find out soon! Regardless, we hope all fans in attendance have an excellent time. That’s what really matters.