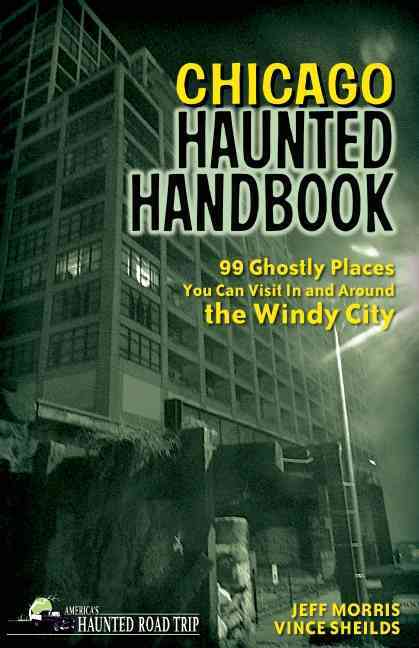 Per Matt
The metropolitan area of the Windy City houses almost 10 million people (currently ranking as the third-largest U.S. city) and was incorporated back in 1837. With catastrophic events taking place during the Great Depression and the Great Chicago Fire (not to mention being filled with gangsters galore), there’s sure to be plenty of supernatural occurrences happening all around the greater Chicagoland area, covering almost 11,000 square miles.

The Chicago Haunted Handbook explores ghost stories from more than 100 different locations, and is the only book to include exact directions, visiting hours, a brief history and a ghost story for each location.

Written by Jeff Morris and Vince Shields, this book only includes locations that are open to the public (no private-property haunts here, kids), or ones which the authors truly believe are haunted. Beginning with a great, historically gripping foreword by Jeff Morris, each location tells a different tale… revealing a dark history of the Midwest.

Several great locations include:
– Multiple tales of haunted bridges and area creeks
– There may some matchmaking ghosts at Cigars And Stripes BBQ Lounge
– Three well-known ghosts that haunt the Chicago Cubs’ Wrigley Field
– A Dark presence at Bachelor’s Grove Cemetery attributed to Satanic rituals
– Railroad tracks always seem to host multiple deaths (and the hosts’ ghosts)
– The legend of a priestess who condemned the spirit of a rapist to his grave
– The ghost of Droopy, a former customer of the Clark Street Ale House who died there
– Tales of gangsters (including Al Capone) being haunted by the ghosts of fallen rivals

Each backstory is researched by the authors and offers a part fact, part urban legend historical description of the events leading up to their tragedies.

Some of my favorite stories include:
– Inez Clarke’s burial plot is commemorated in Graceland Cemetery with a glass box and her likeness inside, that seems to explore the cemetery at night!

– Camp Douglas, the former Civil War camp that became “Eighty Acres of Hell” when between 4,500 to 7,000 Confederate prisoners of war were tortured there, with a mortality rate as high as 23 percent. Today, condominiums are built there and many tenants report a one-armed Confederate soldier appearing outside these units, looking distressed.

– During the Depression, Hermann Butcher’s apprentice died and his body was kept in the butcher shop’s freezer. Later, Butcher sliced it up and sold his carvings to the local townspeople, before moving on to killing local hobos and even small children and selling their meat. When he was finally caught by the local townspeople, he was killed by his very own knives and Butcher was beheaded. His body was buried at Oak Hill Cemetery; his head was buried across the street at Indian Hill Cemetery. The ghost story says that the Demon Butcher’s body is attempting to reconnect with its head and oddly enough, Butcher’s headstone of his body is inching toward that of its head, by means of high water tables, or perhaps something entirely different. Seems like a true-life version of Sweeney Todd!

Stories, like these, deserve entire books devoted to them. Maybe they could be spun off for another time. Also, a few well-known extra locations are listed in the appendix, along with the reasons why they were omitted. And to top it off, the authors have created five possible roadtrips that are similarly themed, including a Paranormal Pub Crawl, a Gangland tour and the hotspots of Archer Avenue.

The Chicago Haunted Handbook is the third entry we’ve reviewed from America’s Haunted Road Trip series and each one reveals stories of a sordid past like no other. We’re really enjoying taking these virtual road trips down different lanes and hope to one day witness their paranormal activity with our own two eyes!

Strength: Great local backstories, along with a few possible urban legends.
Weakness: Many locations are closed nightly, making evidence gathering difficult.
WTF Moment: The John Hancock Center’s trapezoidal shape has been accused of haunting this location with dark energy, causing a general uneasiness among everyone inside. This is one (of many) reasons cited as the cause of the many deaths that occur there.