Cosplayer of the Month: Vedetta Marie 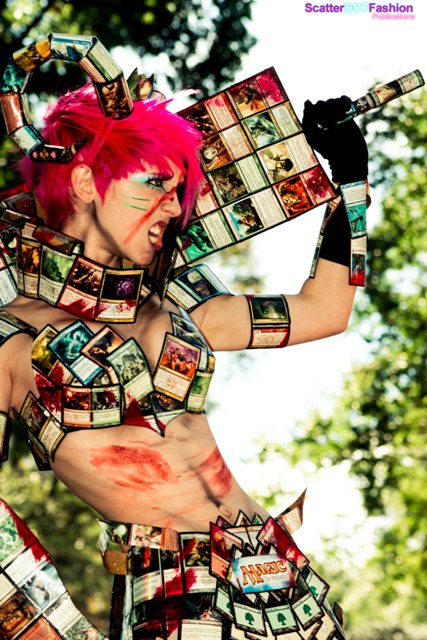 Per Matt
After viewing Vedetta Marie’s awesome costumes consisting of Magic: The Gathering cards, you’ll never quite view the game in the same light. In our Cosplayer of the Month interview, we seek the origins of her Magic costumes, discuss competing for the grand prize of $1,000 in the Geek Media Expo costume contest and blending Zumba workouts with anime and K-pop songs, coming to a convention near you!

Your name, like your costumes, is original. Is there a story behind it?
– “My family name is Italian and I just looveee Italian names a ton! Plus, my middle name is actually Marie and I’ve always liked that, so I added Vedetta in front (which means ‘Scout’), because I liked how it sounded/looked/and was very different from any name I’ve seen! When you Google it, you only find me!”

How did you initially get into cosplaying?
– “It has a little bit of history. When I was in Fifth grade or so, I started getting into reading manga and watching anime. Over two years or so I started to gain some friends who also had similar interest and over time we found out about the amazing world of anime conventions! After attending my first one (Animazement 2008) and noticing that everyone dresses up for these events, I created my first ever cosplay for my second convention ever, Anime Weekend Atlanta 2008!”

What was your first cosplay character?
– “My first cosplay character was Nekozawa from Ouran High School Host Club! I was soooo excited to wear this to Anime Weekend Atlanta 2008! I remember getting all the pieces of the uniform from our local Goodwill and buying the school crest online. Then I got my Mom to help me sew a cape and the hand puppet! When we got to the convention, we dyed my hair purple in the hotel and totally stained the tub! It was my first time dying my hair by myself!” 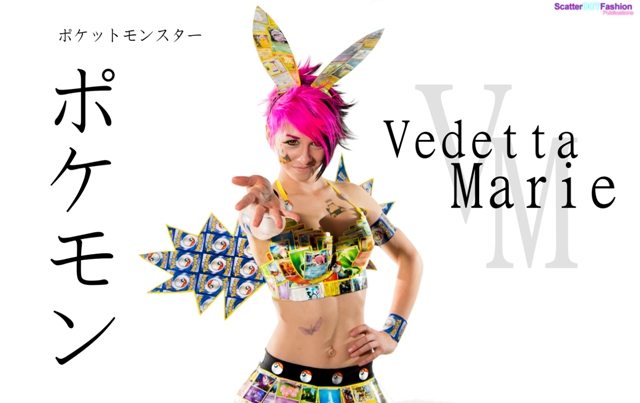 What’s your favorite cosplay character?
– “Ohhh! That’s such a tough question!! Too many to choose from! Hmmmm…. but if I had to pick, I guess my favorite cosplay is Lavi from D.Gray-Man! I love the look from the sweet red hair, down to the awesome black-and-white pants!”

I’m guessing you’re an anime fan. What are some of your favorites?
– “Some of my all time favorites that I can watch over and over again are: Full Metal Panic!, Host Club, Baccano!, Full Metal Alchemist: Conqueror of Shamballa (Makes me cry ever time!) and Eden of the East! I don’t watch as much anime as I wish I could. I started out as mainly a manga reader, too, so my list of favorites expands more on the print side, with my all-time favorite being D.Gray-Man: The Manga.”

Can you tell me a little about the J-Fusion Cardio Party panel you’re working on?
– “Yes! I’m so excited about this! A few years back, I got my certification in Zumba Fitness and have always loved teaching Zumba to students and telling people how fun it is. I wanted to be able to bring that same fun dance party to conventions, but make it relevant! Instead of upbeat Latin pop, now we’re going to be using Anime and K-pop songs!”

“Another reason for creating this was because a lot of conventions only host formal dances on Friday nights, but some people still want to release their nighttime energy in their party clothes. This will allow them to do so! Get ready to sweat! In this panel, there’s going to be nonstop, upbeat anime/Japanese/K-pop/etc. dance music going on, for the full panel! Every song will have an extremely easy-to-follow dance routine that I will be doing in the front of the room, guiding for an easy-but-intense-and-fun dance cardio party time!” 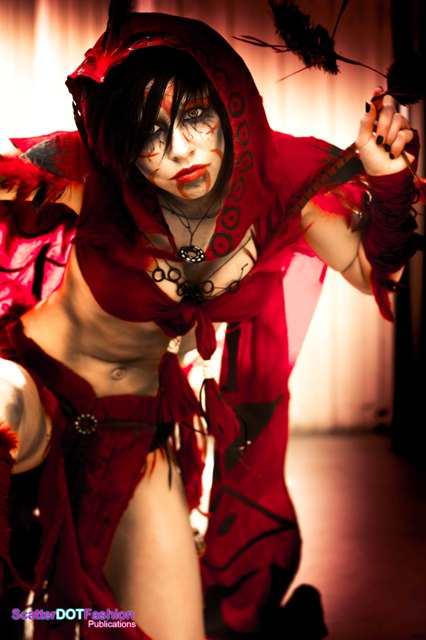 Was this year’s Geek Media Expo the first one you’ve attended?
– “It was, and I had a ton of fun at it too! Can’t wait to come back next year!”

What brought you to GMX?
– “Well, I recently moved to the Tennessee area for school and that has opened up a lot more conventions that I’m within driving distance to, plus I heard a lot of good things about it while I attended AkaiCon in Nashville as a guest, so I wanted to check it out! Definitely was a good idea!”

Was this your first costume competition?
– “It was not! I was my second! I have only entered in one other contest and that was in Asheville, NC at Anime Comic Expo! I’ve never really had the time to enter in contests, since they commonly take up most of a Saturday to enter. A lot of times, I model in convention fashion shows (Like for H.Naoto, Sixh, Putumayo) that fall on the same time slots as those contests, as well. But I had a lot of fun at the GMX costume contest! Hope to try out a few more contests in the future, if I find the time!”

What was your inspiration to use Magic cards?
– “I wonder that same question, too! The whole idea came out of nowhere! When I was representing GeekOut 2013, during some off time, my friend gave me a pack of Magic: The Gathering cards and I thought they looked so pretty, but I didn’t know what to do with them! At the time, I was also trying to think of a costume for Animazement 2013 and somehow, with those cards in hand, the MTG gods must have possessed my body and told me what to do, because for some reason, I started to hot glue them to some fabrics, try it on, and realized, ‘Hey! This looks pretty neat!'”

“I did a little research after that and found out that some other people had tried making dresses out of MTG cards, but they seemed to be a little to box-like, so I decided to try more of an armor look. The first outfit was a huge hit at Animazment 2013, but as the summer went on, I added many more cards and styling to create the outfit it is today!”

Do you play Magic: The Gathering games?
– “I’ve tried a little bit here and there. Unfortunately, I can rarely find the time to play or any cards left in my deck! If I see a picture on one of them I like oh so much, it has to become a part of the costume! Especially shiny ones!!!”

What are you currently geeking out to?
– “AH! SO MUCH! I’m currently watching a lot of Star Wars: The Clone Wars and Free! Playing Saints Row: The Third and getting super-geeky excited about the new The Hobbit movie!!” 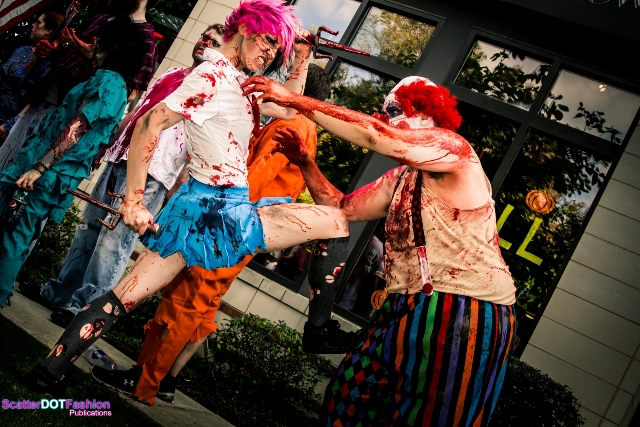 You’re currently working on a Scorpion costume from Mortal Kombat. What’s the status of that project?
– “Yes! Scorpion! The costume is about 90 percent complete!! I’m so, so excited to bring this costume to the next convention I attend! All that I have left to complete are the chains, mask and fix my knee skulls. I’m trying to create a female version of the original-movie Scorpion look, along with using creative ideas from Frost costumes/concepts I have found.”

What conventions will you be attending in the near future?
– “Some close-up ones will be Ichibancon, Con Nooga, Anime Matsuri, JABEcon! and Animazement! Once the holiday season ends, I plan to release a list of other sure-fire ones, for the upcoming months.”

Will you be participating in Con Nooga in any capacity? If so, what?
– “Yes! I recently talked to their staff and it looks like I will be attending Con Nooga as a guest, this coming year! Very excited! Con Nooga has become a favorite of mine and my friends. I plan to host a good few panels on cosplay, J-fashion and have a booth!”

Is there anything else you’d like to add?
– “I want to thank you very, very much for this fun little interview! I love talking to people about the geeky culture we’re all a part of! I’ve met so many great and life-long friends by being a part of conventions and can’t think of a better way to spend weekends! Happy Holidays!”