Per Matt
On October 4, 2013, War Memorial Auditorium was overrun by the walking dead.

Here Come The Mummies pulled out all the stops as they filmed a special concert to be released as their second DVD.

The eight-member band, donned in ceremonial costumes, really brought the funk. The group’s style is a little indescribable, one that has to be seen to be believed. Part jam band, the Mummies perform different styles of music, including funk, rock, ska, Latin and R&B. But don’t let their costumes fool you, they can really sing. Rumor has it, several of the disguised band members have actually won Grammys.

Their performance is an out-of-this-world stage show, which includes high-energy fun, humor, many double entendres and innuendos sprinkled throughout.

The band made a grand entrance by parading through the crowd, creating quite the spectacle, complete with marching band and royal subjects even carrying one mummy aloft.

During Freak Flag, the crowd erupted when Java Mummy waved his extra-large flag onstage. Wrapping it up, his onstage tricycle drive-by was hilarious and fun.

During Fenk Shui, the crowd joined in on an impromptu line dance and thoroughly got into the spirit.

The most interesting song of the night was Carnal Carnival, which created a carnival-like atmosphere, almost as if it was inspired by Danny Elfman. This could easily be featured in any one of Tim Burton’s movies. I could also envision this being featured onstage in amazing Broadway production. Java’s carnival barker costume and performance felt right at home. 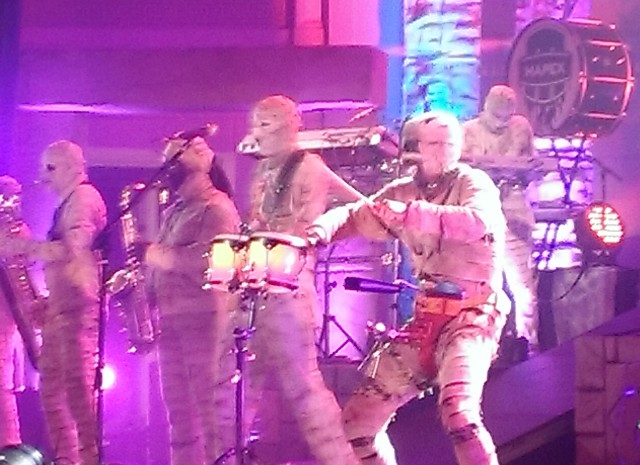 A couple of Latin-themed songs were sprinkled in the set list and midway through, a slow groove broke out. The Now took an amazing new beat, as both guitarists had a drum off and DCI (Drum Corps International) images flashed through my head.

This was easily one of the best live performances I’ve ever seen. The crowd really got into the groove and many chanted lyrics along with band and danced on command throughout the hour-plus concert. I’d previously seen the band perform and enjoyed them, but this time, they truly brought down the house! The band members even stuck around afterward for autographs and photo-ops.

Incredible showmen and marketers, Here Come The Mummies are the real deal. I can’t wait to check out their upcoming DVD and reminisce on all the undead fun!