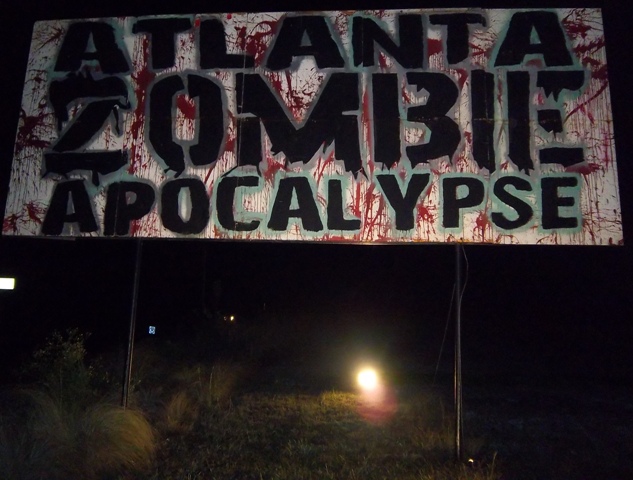 Limber up, y’all, because the Atlanta Zombie Apocalypse (AZA) contagion is spreading fast and the dead walk amongst the living once again! In its third year at Ground Zero (aka Atlanta), the Atlanta Zombie Apocalypse attraction provides an immersive, interactive horror experience for those brave enough to wander into the AZA compound. Atlanta is widely regarded as the zombie capital of the U.S. What better way to celebrate all-things fiendish than getting your heart pumping, while escaping from the undead, at the scene where it all started?

The contagion has run rampant, since last time we checked in with the post-military leaders of AZA and I’ve been advised (and witnessed/survived) the horde of undead, ghouls, cultists and fiends that has increased exponentially.

This year AZA features two main Halloween attractions, Return of the Curse of the Undead and “?” If you can survive those two, then test your mettle in the interactive zombie shoot, Zombie Killer.

In Return of the Curse of the Undead, the tale continues from the strange sightings that were reported last year at that same location of secret societies, human sacrifices and the dead rising from the ground out in the woods. Led by the few surviving researchers, you will journey deep into the woods to search the area to discover what really happened as you seek the truth behind the Order of The Grave. What makes the dead rise? See if the surviving researchers will help you find out. The ending surprised me and will surely shock you too, but only if you can make it through the deep, dark woods first! In Return of the Curse of the Undead, you will find out what really goes bump in the night when you disturb unhallowed ground.

“?” is just that — a scare-rific experience too terrifying to explain. What will happen once you are inside? How will you survive when you don’t know who you can trust or where the way out is? With screams at every turn, this attraction pulls out all the stops to provide you with a colorful, healthy dose of terror. I was sworn to secrecy, but a few of the more “colorful” rooms in this attraction will visually wreak havoc on your brain.

Zombie Killer gives you the chance to use those first-person video game shooter skills as you wander through the dark rooms and corridors of an abandoned motel, trying to kill off the undead pests lurking around, waiting to attack. You get an airsoft gun with 100 rounds. Use ’em wisely!

If you’ve ever wanted to be immersed in a horror movie, then this is the horror attraction in Atlanta to visit! Remember your cardio, because you are in for one Hell of a good scare. And maybe, if you are lucky enough, you will get to go through AZA with some real-life scream queens as I did, on opening weekend. My group of unassuming civilian survivors was accompanied through the attractions with famous horror and exploitation movie scream queens, including Linnea Quigley (Trash from The Return of the Living Dead and Suzanne from Night of the Demons), Lynn Lowry (Nurse Forsythe from They Came From Within and Kathy from the original The Crazies), and one of the post-military leaders was Madeline Brumby (Edna Marco in Dear God No!). There’s no place like Atlanta for zombies and no attraction quite like Atlanta Zombie Apocalypse. 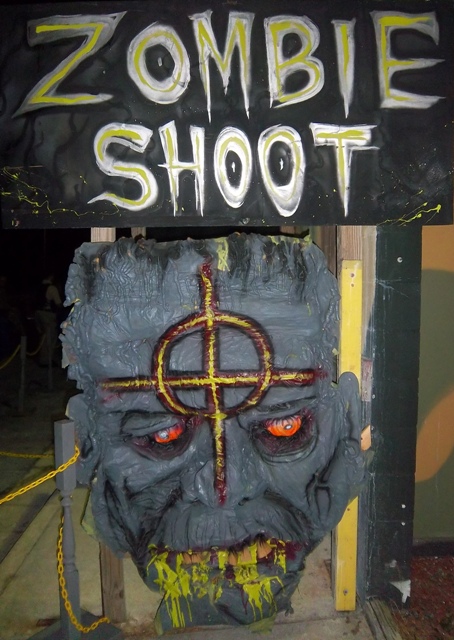 Cost:
$3 for parking (no valet)
$20 for the Return of the Curse of the Undead only
$20 The super-secret “?” attraction only
$35 for a combo ticket which includes both Curse and “?”
$30 Zombie Killer – where you shoot zombies with an automatic Airsoft gun
$60 Triple-feature ticket which allows you to experience all three shows
Box office accepts cash, Visa, Mastercard, or Debit/ATM cards
(No discount for children; not advisable for children under 13 (PG-13) – children under 13 must be accompanied by a guardian at all times, no small children or babies allowed. No open-toed shoes allowed.)

AZA merchandise will also be available for purchase.
Prints of photos taken in the photo booth can be ordered through here

Because parts of AZA are an outside attraction, Curse will be weather permitting. Please check Website for updates and further information.