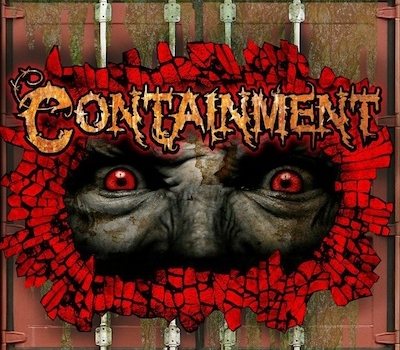 Everyone is simply dying to know what exactly is contained in Containment.

Reporters and pretty women media members were invited to be among the first victims of Atlantic Station’s first haunted attraction, Containment, before its official opening to the public. Warned by friends and Tweeted by Atlantic Station “not to say ‘I’ll be right back,'” I was a more than a little intrigued at what lied beyond the tracks at Containment. With a professional Website and video that warned of “unexplained incidents,” “classified information,” and “restricted area – authorized personnel only,” it left me to feel that I might be walking into the setting of Saw, Hostel, The Grudge or The Ring.

First thing you notice when you drive by Atlantic Station on the highway, are the three large, stacked transport containers with the Containment logo and evil red eyes staring at you, ripped right through the middle of the containers. As the story goes, demonic artifacts collected by the mysterious Frightmares, Inc. were being transported as cargo, in secured containers by train through Atlanta. A mysterious chain of events changed everything and the train derailed, which caused the containers to crash onto the Atlantic Station property.

What follows next was a series of unexplained incidents, disturbing behavior and mysterious disappearances. The demonic artifacts were quarantined below Atlantic Station by the Frightmares team at the crash site and the situation was supposedly contained. There has been no reported link between the phenomena and artifacts, but rumors purport disturbing sightings at the site of Containment. 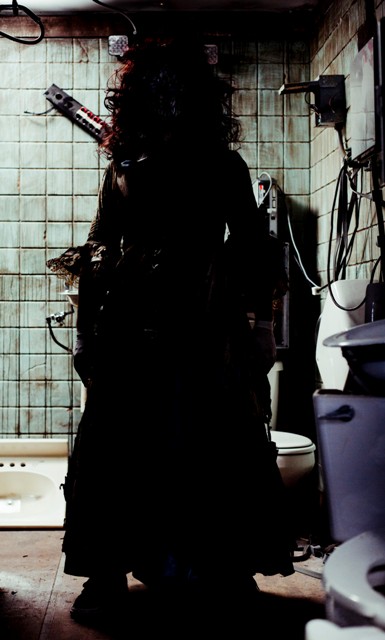 Now, on to the derailed contents of Containment! First off, it’s excellent to have a new, large haunt inside the Perimeter and at a mixed-use (work, live and play) community. The “containers” were well laid out and the scenes were gorily unique. Containment combined both animatronic horror with ghoulish actors. For a brand new haunt, they are on track to have some terrifying scares, but they do need to tighten up their attraction a bit.

I went on the pre-opening media night and it seemed there were a few minor issues that needed to be tweaked (and hopefully are fixed now) — such as, a few of the newbie haunt staff needed to hone in their scare tactics and timing. One issue which really took me out of the moment: Every time we left a container, a security guard was standing there to point us to the next container. This reminded me that I was in an attraction and not at the scene of unexplained horrific phenomena.

(Suggestion to Containment: Either have your security guards dressed up as ghouls or have stronger signage to guide the way for your unsuspecting victims.) The haunt has great potential and I would suggest waiting until later in the season to visit the attraction as the Containment team will have had some time to smooth out their performance and first-night jitters.

So, that was my initial impression, as a seasoned haunted-house enthusiast (who hit seven haunts on Halloween night, last year). I’d love to go again and get another peek at what’s contained in Containment. Lastly, I’ll leave you with this: Being contained at Containment felt like I was running through a freakily disturbed redneck trailer park with all the trashiness and oddities that you can find there! They have a good theme going and it will be impressive to see what twists and turns Containment takes from here, with the solid foundation that they have laid out.