Cosplayer of the Month: Riddle 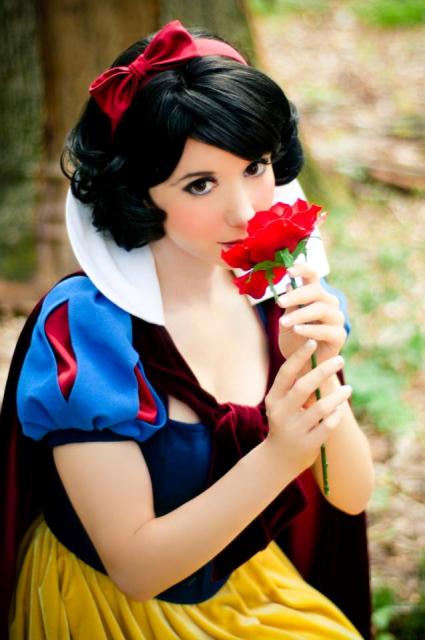 Per Matt
Riddle me this: Who shall be the next Cosplayer of the Month?

That designation goes to Riddle! You can catch her on the Syfy program Heroes of Cosplay, or check out her awesome costumes on display on her Facebook page, but I recently caught up with her in person, at the Wizard World Nashville Comic Con for a quick interview. She discusses creating her costumes, offers some great advice to beginning cosplayers and appearing on the TV show, Heroes of Cosplay!

What is the origin of your name, “Riddle?”
– “I think, I was sitting with a friend and we were talking about what would be a good cosplay name. We liked the fact that I would become different characters. I wasn’t always what I seemed. People see me as a small little girl. They think I’m sweet, then they meet me, and I’m all like, poop humor, fart jokes and a dirty mind… I thought, ‘Riddle, that sounds cool name.’ It’s been so long now, I think it’s a myth and a legend. I’ve forgotten where the origins come from.”

What was your very first outfit?
– “My first outfit was from an anime called Devil Hunter Yoko. Some people have a debate: Is your first cosplay when you go to your first convention, or is your first cosplay when you first wore a costume from your first geeky fandom? I have to say, Devil Hunter Yoko is my first, because I was just getting into anime and I just really liked the character. I thought it was a cool design. I didn’t know what cosplay was, at the time. I was just really interested in the character and I wanted to be her. So, I decided, ‘I’ll make the outfit.’ It wasn’t very good.” 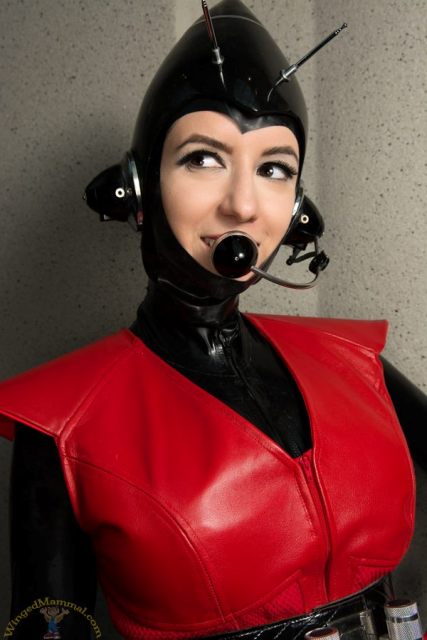 Is cosplaying your full-time job?
– “No. Cosplay is still my hobby. I still work, either as a freelance mold maker or I also work part-time for a comic-book artist, as a personal assistant. I’ve gotten the opportunity to pick up odd jobs here and there. I would love to do costuming full time, but then it might morph into making costumes for other people — which would be a lot of fun — but, I still love making the costumes the way I want to make the costumes and seeing the costumes I want to see the costumes. But, I get to come to conventions; I get invited as a guest and the hobby basically pays for itself, now, which I really appreciate. I can’t complain. I feel like I’m in a really good place, right now.”

Do you have any idea how many total characters you’ve portrayed throughout the years?
– “I’d probably have to say in the 70s or 80s, now, but there’s stuff in my closet that will never see the light of day, ever again. I won’t sell it, because I don’t want anybody, ever, to wear it, because it’s so poorly made. I keep it, basically, as a reminder to show myself how far I’ve come. I often joke I’d love to remake my first costume and see the difference from when I first made it, to what I can do now.”

What would you say is your most complex outfit?
– “The most complex outfit is a toss-up between both Wasps (both the Classic and the Modern) and the Rocketeer. They both have elements of hardware, but then there’s the fabrication side of it and the fabric side of it — trying to blend the two together. On the Classic Wasp, the helmet was incredibly difficult because it needed to be such a tight fit and it needed to be a certain shape, but the shape could get really goofy, really fast. With the Modern Wasp, how was I going to attach the armor? Each costume sort of has its own difficulties. Actually, now that I think about it, I would have to say the Alice dress, from the last episode of Heroes of Cosplay. That would have to be the most technically challenging because sculpting the dress is not really something I’ve ever seen before, or that there’s a tutorial on the Web, as far as I know. I didn’t know how it would turn out and was only hoping for the best.” 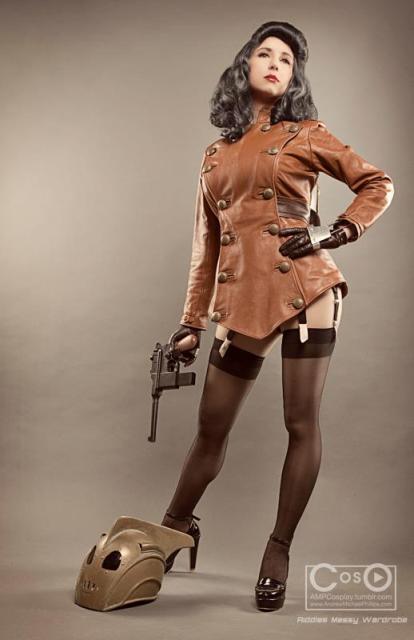 What kind of tips could you give to beginning cosplayers?
– “My tips for beginning cosplayers are: Have patience. Cosplay can be very difficult and frustrating at times, but just stick it out. It’s totally worth it. Have confidence in what you’re creating, because it’ll read in photos if you’re uncomfortable. Yeah, the shoes suck in cosplay, but you should never be uncomfortable in your costume, to be the character. You should be beaming that you can be a superhero or a princess or an Ewok or anything like that.”

“Cosplay is very rewarding. You learn a ton of skills that crossover into everyday life: Budgeting, time management, wigs, fabric, props, photoshop, working with photographers, social media, everything… Cosplay is such a great hobby because you can participate at any level. You can commission something, because basically you’re keeping someone else employed or you can create the whole costume and wear it out onto the floor, yourself.” 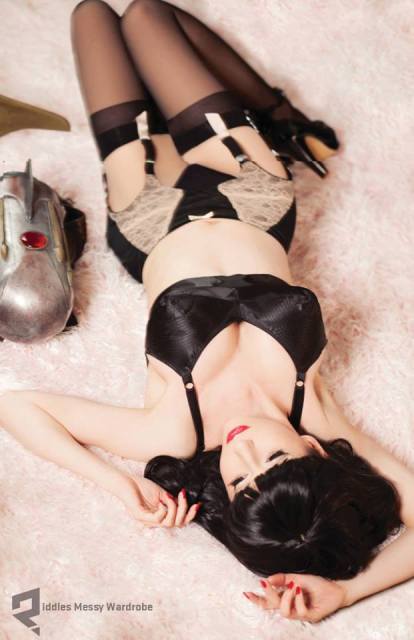 Do you create all of your costumes, by yourself?
– “I pretty much create all the costumes, myself. I do work with my husband, so that’s also why we use the name, ‘Riddle,’ because it’s the both of us. We’re a team. I also work with SMP Designs a lot. Sean Patton is an amazing tailor. I basically learned all my sewing from him. I still struggle with patterns, so I’ll call him up. He’s amazing. He’s incredibly patient with me. Sewing does not come naturally to me. Having someone like Sean, who’s willing to help me, is such an incredible asset. He’s a great craftsman, himself.”

“With cosplay, I look at it like a movie: If you have an idea and a vision, you can try to do as much as you can, but if you know someone out there who maybe can do it better, there’s nothing wrong with going to somebody else — as long as you credit them. When you do a movie, one person doesn’t do everything. You find the best people for the job.”

Piecing together my first costume from The Walking Dead, I’ve learned it’s a tough job.
– “It’s tough to do movie-TV stuff, because that stuff actually exists. If you don’t get it right, people will know. There’s really no room for translation, like with comic books. If you don’t look like the character on TV, people will notice. Geeks can be harsh judges, but mostly, everybody loves seeing the character and love that you put effort into it. That’s the addicting part of the hobby: Getting to meet people.”

Did you ever have a mentor, when you were starting to cosplay?
– “When I started, no one was really cosplaying. It was sort like a potato sack race that we were all starting at the same time. As time has gone on, I would go on this old Website, called Fan’s View. It was this gentleman who would go to all these cons and he would take a single photo of all these costumes. That’s the only place you would ever see your photo on the Web. I don’t want to say cosplay was underground, but it was not as mainstream as it is now. But, I have to say, what really inspires me now is meeting somebody, and them saying, ‘This is my first costume.’ I’m completely blown away, because what they’re producing is something that probably took me four or five years to get to that level. They’re making it look easy.” 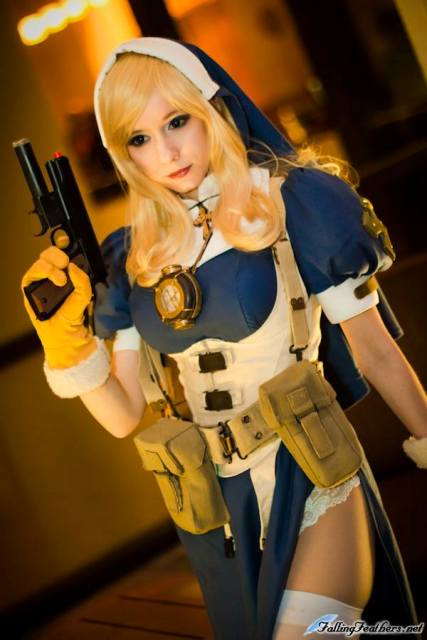 What are you currently geeking out to?
– “Anime-wise, I’m really into Attack on Titan. Videogame-wise, I have my Vita, so I’m playing Dragon’s Crown and on my Playstation, I’m really excited about LEGO Marvel Super Heroes. I played the demo and it’s pretty awesome. I’ve always loved the LEGO games, but I’ve never bought any. The new Legend of Zelda game, I think that’s what I’m most excited about, because I’m a huge Legend of Zelda fan. I like to spread my geekiness all around. I can’t focus on just one thing to geek-out about.”

Do you have a favorite Zombie film or program?
– “I actually only recently started watching Zombie stuff, because they scare the crap out of me. Of course, I love The Walking Dead, but I think I have to go with Shaun of the Dead and World War Z, the book. The only thing the World War Z book and movie have in common is the title.”

Where will you be headed next?
– “I’ll be in Rhode Island with Jessica Nigri and a couple of other cosplayers. I’m hoping to have something new in the works. I’m really excited. In November, I get to go to Ireland as a guest.”