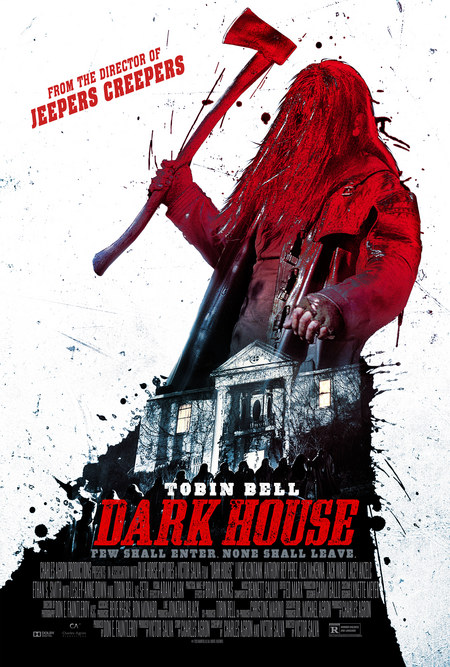 Per Matt
In the war between good and evil, many will be led astray.

When Nick (Luke Kleintank) inherits a mysterious-but-somehow-familiar house, the 23-year-old may be biting off more than he can chew. According to urban legend, the house (along with the small town of River’s End) washed away in a flood and no longer stands on its original property.

Seemingly on a wild-goose chase, Nick and his friends somehow find this cabin in the woods still standing, along with an irate squatter, Seth (Tobin Bell). Both the house and its caretaker seem to be hiding a dark secret, accentuated when the group is hunted down by hooded axe-draggers. The identity (and objective) of this group made me re-think the entire plotline of the movie. Will Nick discover the truth before it’s too late?

Dark House is a creepy thriller that offers plenty of low-budget thrills and chills. The slow-moving story teases the audience with many red herrings, but picks up the pace when the group arrives in the woods. The very pregnant Eve (Alex McKenna) is the only character with a lick of sense in this movie, although she clearly moves as if she’s wearing a fat-suit costume. Nick’s special power is more of a McGuffin than a story accelerator. His dark secret felt unnecessary with the overall storyline.

Everyone’s got a hidden agenda in Dark House and the truth seems to continuously change, depending on who’s telling it. Having characters portraying both heroes and villains can be confusing at times. The ending is a bit ambiguous and more questions than answers arise. Overall, this movie is similar in plot and tone to that of Rosemary’s Baby, which is one of my all-time favorite psychological thrillers.

Beginning on Friday, March 21st, Dark House will have a theatrical release in Atlanta, GA exclusively at AMC Southlake. The movie is also currently available on Video On Demand, cable and DVD platforms.

Strength: A compelling tale of good vs. evil.
Weakness: An unsettled conclusion left me wanting more.
WTF Moment: If you felt threatened by a haggard-looking Jigsaw, wouldn’t you run away and never return?