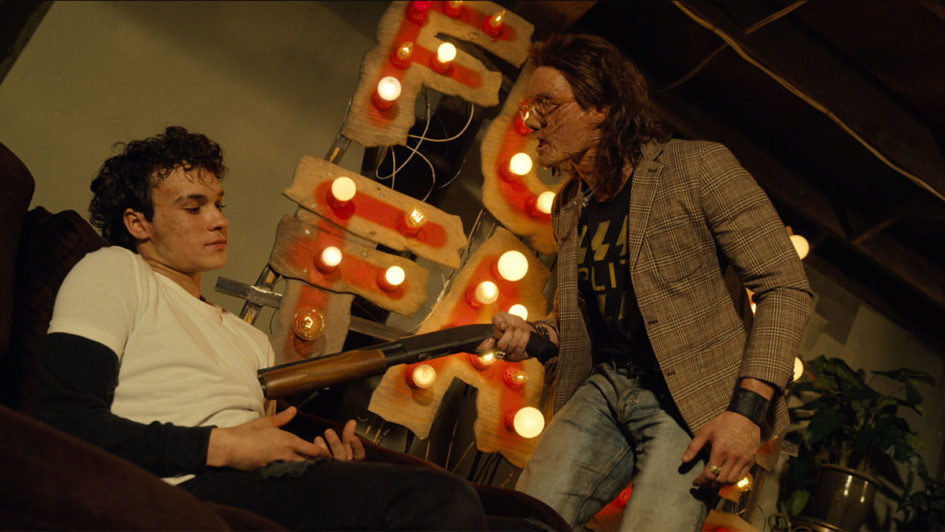 Chester and Marcus finally face off in the Deadly Class season finale.

It’s retro, full of punk rock and attitude… the ’80s never looked so good! Deadly Class has been highly addictive to watch throughout its first season, as the show tells the tale of a homeless teenager attending a prestigious school for assassins in the heart of the counterculture movement: San Francisco.

Hidden in plain sight, King’s Dominion is a private school where crime families from around the world send their children to learn the deadly arts, with the intention of one day taking over the family business. If the students don’t quickly learn the art of survival by any means necessary, the social cliques may provide a killer learning curve. Marcus (played by Benjamin Wadsworth) is the newest student, considered a “rat” by the rest, as he doesn’t have an allegiance to any of the associated groups. Joined by other young outcasts, it’s tough for the teenagers to get ahead in a school that demands its students to strictly follow its rules, while taking pride in breaking society’s laws.

Henry Rollins’ character, Jurgen Denke, a teacher who previously worked in a poison lab, is the only one who sees this school for what it truly is: full of classism, not allowing the “rats” to grow and graduate into top-of-the-line killers. But after a top-notch fight with Master Lin (Benedict Wong is perfectly cast in the role as headmaster), Denke is currently on the run, as teaching at King’s Dominion is a lifetime job and one simply cannot retire peacefully. Eventually, he will be hunted down by his former students and killed, but after appearing in three early season episodes, the character was mysteriously missing for the rest of Season 1. Does that mean the best character on the show will make a triumphant return for Season 2? Sure hope so!

On Christmas break, the misfits band together to fight a group of redneck serial killers who are searching for fame, which seems to fit naturally into the comic book-based storyline. By the conclusion of the season finale, Master Lin’s secret family gets pared down, Chico’s severed head is reclaimed, Billy gets shot, Saya’s done with risking her life for the group after proclaiming them her family and the Soto Vatos finally discover the truth.

At times, the show reminds me of Preacher, in terms of story structure and that’s a good thing — I have enjoyed both series. Deadly Class is really retro and full of nostalgia, while there’s the bad (so many cigarettes are smoked, practically triggering my asthma just from watching an episode), the good (all the ’80s neon colors and references) and the VERY good (so many great songs being played either in the background or cranked up during fights), all these kids have unresolved issues, which basically boils down to drama with their families… coming in a variety pack of problems for their classmates. Each of the main characters is bad, very bad. There’s a lot of bickering among the students, a lot of in-fighting and more than a few of them have already died, so it’s a good thing this school is very big and many more characters can still be introduced.

After the first season’s 10 episodes have aired, the lingering question remains… will it continue? As of now, Syfy has yet to confirm a second season, which would truly be a crime. I have really enjoyed the series as a whole, specifically Lana Condor’s Saya. I would truly be upset if the series is not renewed, but should that eventually happen, Saya’s character is the only one who would deserve a spin-off, as she attempts to balance school life and being the leader of the Kuroki Syndicate. Following Saya’s solo adventures would definitely be killer.