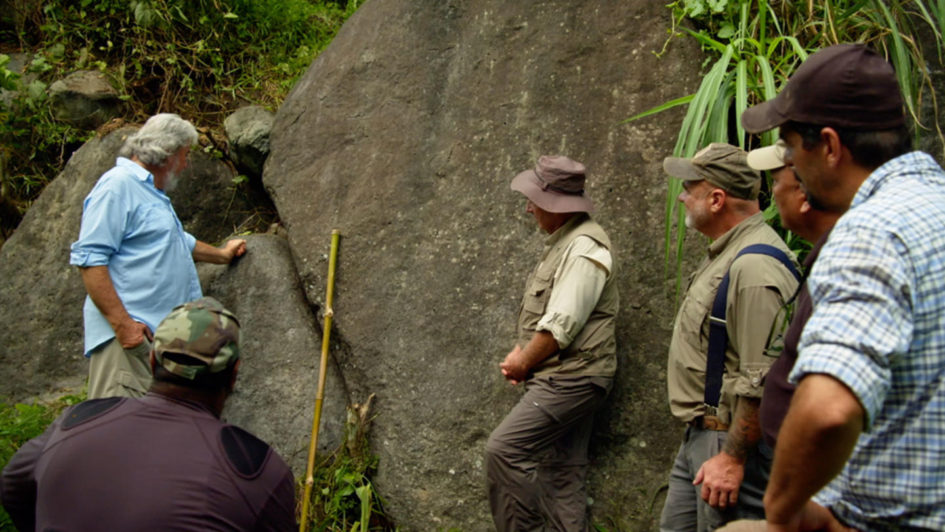 The crew attempts to uncover a mysterious underground tunnel, which may lead to buried treasure in Lost Gold of World War II. Photo Courtesy: History Channel.

What actually happened to many of the world’s most famous treasures? What if they’re forever lost in an unmarked site, waiting to be unearthed by some treasure hunters who just happen to decipher the vague, left-behind clues? This is one of the main pulls for television series like Lost Gold of World War II.

At the end of WWII, Japan’s General Yamashita surrendered, was tried and executed all before revealing the exact locations of the loot he plundered throughout Southeast Asia. Rumored to be priceless artifacts, jewels, military secrets and gold, his initial plans may have been to leave behind picture codes and symbols in order for The Golden Lily, a secret society linked to the country’s royalty, to return and reclaim the plundered prizes.

On Luzon Island, in The Philippines, a six-person team (along with their head researcher, who is based in the U.S.) follows up on eyewitness accounts, discovers a story rock, uncovers mysterious symbols and by the time the season finale airs, finds a hidden underground tunnel, whose entrance may have been opened up after a record-breaking typhoon hits the island.

As a sucker for the buried-treasure subgenre that lurks within various basic cable channels, even if scripted, is it possible this reality TV could actually be real? From the start of the series premiere, “Death on the Mountain,” I was intrigued at what may or may not remain hidden within the rumored 175 treasure sites. The season finale attempts to connect the dots between a history lesson and an education on global politics.

“Yamashita didn’t bury this in a day and we’re not going to find it in a day.”

Other than the exotic foreign location, the difference between this show, Oak Island and others is the rest seem to deal with a TON of urban legends, fighting to find the truth. Lost Gold simply doesn’t have hundreds of years of tall tales surrounding its buried treasures, as the waning days of WWII happened much more recently. Should social media have been around during General Yamashita’s time, surely the missing treasures would have been instantly found. But with Nippon Star’s shady connections and a little background information on the Black Eagle Trust Fund (an unofficial, off-the-books CIA funding for covert operations), I’m instantly hooked and wonder who else may have already attempted to reclaiming some of the lost loot.

All of this is beside the point, as Peter Struzzieri, John Casey and his team fought off conflicting symbols, multiple failed attempts and unbearable jungle conditions to discover a tunnel, cutting Season 1 short with a MAJOR cliffhanger. Since it’s filmed on location, Lost Gold may be incredibly expensive to produce. Regardless, eight episodes is not enough for this series. Sure, History may not have fully realized it had a ratings gold mine on its hand at the time, but that’s way too short for Season 1.

Lost Gold complements The Curse of Civil War Gold (Will Civil War Spin-Off Disband the Oak Island Fellowship?) and The Curse of Oak Island, as this channel seems to be hopping on the conspiracy and buried treasure wagon for major ratings… and it’s succeeding. But how long can this series last? The only remaining key eyewitness to have seen Yamashita’s handiwork up close and personal has now passed away. How will Grandpa’s death affect the team’s work going forward? Without the ability to dig a little deeper behind key clues, their treasure-seeking journey may be quickly stalled. Are there any 70-year-old booby traps that may still function, preventing any further revelations? Will any representative of The Golden Lily secret organization finally make a statement about the situation? What is the secret identity of the confidential informant who may or may not have key blueprints to treasure locations found throughout the island nation? Will anyone else have their lives threatened while seeking the truth? These are only a few questions that arise after wrapping up Season 1.

These treasure hunters are definitely undertaking a dangerous journey to uncover one of the great unsolved mysteries of WWII. Deciphering and translating the strange signs, symbols and dead-ends will hopefully be aided by more research and boots-on-the-ground exploration. I feel less skeptical that these hunters will uncover something more tangible than the Oak Island crew, as their journey to revealing lost history has taken place throughout hundreds of years that could have involved many scenarios where the prizes were moved to another place. This one is more recent and feels like it’s actually possible to find treasure from multiple locations throughout the islands that hasn’t already been claimed or deteriorated.

History has basically molded reality TV into a treasure-hunting subgenre. While it’s absolutely possible nothing of value will actually be found, here’s to hoping the TV crew and its featured explorers will inspire more people into discovering the facts of secretive lost truths of the past.