Deep State Takes a Deep Look at the Politics of Intelligence 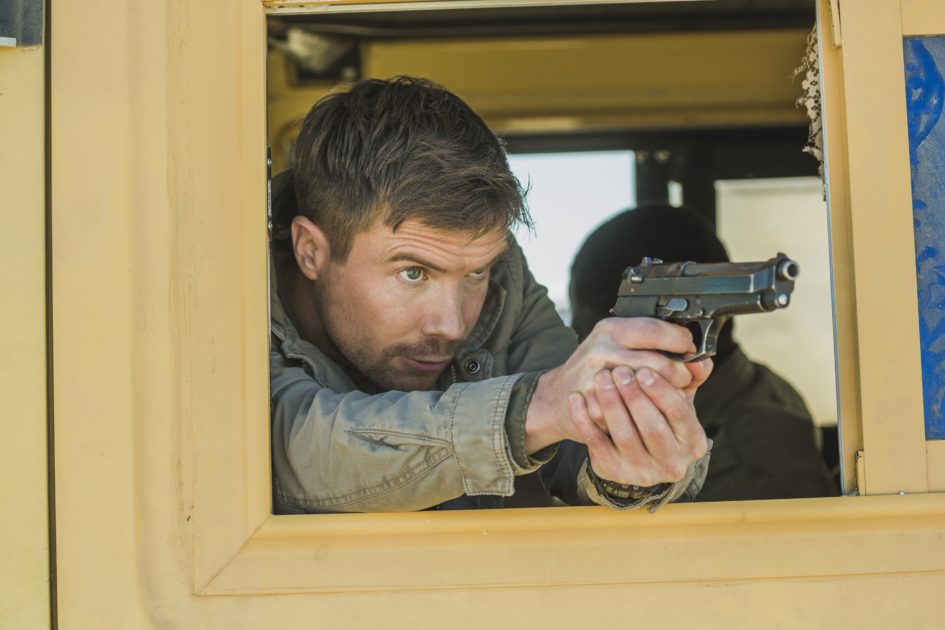 Per Matt
Headline news inundates us with 24-hour news cycles of violence, government conspiracies and global politics. Such is the backbone of Deep State, which highlights the motivations of global elected officials, the fallout from their actions and all the money in the world, which is seemingly responsible for EVERYTHING.

EPIX has a taut spy thriller on its hands that absolutely deserves more promotion and publicity from the premium network. What begins with a creepy remix of Talking Heads’ “Once In A Lifetime” leads into the chaos of war, which often leads to civilian casualties. I recently binge watched Season 1 in order to fully prepare for the recently released second season, and I must say, those eight hours pack a punch (or two) that’s a whole lot to actually absorb within a short amount of time.

The first season revolves around Max Easton, a previously decommissioned British intelligence agent and retired Secret Service operative who is brought in to cover up a global government conspiracy. Portrayed by Mark Strong (best known for his work on Kingsman: The Golden Circle, Shazam! and the upcoming The Dark Crystal: Resistance, the viewer quickly learns that former spies never age gracefully… they always seem to get “coaxed” back into the field. In Easton’s case, the lives of his family are threatened if he doesn’t help out his previous employer. Situations get incredibly complicated when it’s revealed that Max’s estranged son, Harry (played by Joe Dempsie), has followed in his father’s footsteps. There’s lots of time jumps involved, plenty of half-truths and lots of lies, a never-ending ominous feeling of death lurking around the corner, deceit, torture, traitors, double agents and mutinies crammed within flashbacks and flash forwards, fully dripping with politics.

Killing people is what this father-son duo has in common, and they both do it very efficiently. Paired with Karima McAdams as Leyla Toumi, who is exotic and pristine with her acting, these three British agents have gone rogue, trying to decipher current events, relieving global tension with nowhere to turn. Fighting for their lives after undergoing an undercover mission gone horribly wrong, their country has turned on each of them. Without a home, these characters’ strained relationships rise to the surface.

“There is no starting again in this life.”

When you wage a war against the CIA, there are no winners… only survivors. And in this case, no one is accidentally left alive. Eventually, you’ll become a problem that needs to be dealt with. This is what Max and his family learn in Season 1. These good guys feel like they’re the bad ones and the government agency that’s hunting them down is always in the right. I didn’t really expect Max to outlive his usefulness and actually surprised myself, getting a little emotional when he returned to live with his family. Will he live happily ever after, though? It was tough caring for the hardened former agent who’s full of sullen seriousness, but I found myself happy with the outcome of the first season.

Season 2 begins with a translator in trouble, a new group of militants and the same two agents, now working apart, on opposite ends of the world. Everyone seems to be exiting the government rat race and moving into the private sector, including Harry and Leyla. Loyalties are questioned, all sorts of cover-ups are revealed and the war on terror continues, this time without Max. Flashbacks and flash forwards reveal this is actually an origin story for the duo, as it’s both a prequel and a sequel to the first season. Getting to the truth seems to be an ongoing difficult matter for our heroes, and as revealed in the spoken-words intro… “nothing ever changes.”

Deep State does a great job of setting up powerful cliffhangers, getting you hooked into wanting to watch just one more episode per sitting. The games that people play lead to diplomatic pissing contests for power and control of information, which is the ultimate asset. Trust is a hard thing to come by for these characters, and often bad things happen after it’s given.

Heavy with intrigue and paranoia, Deep State feels like it could be a distant relative to many of the great spy programs of the past, almost as if it could be an updated version of Kiefer Sutherland’s 24 (which I thoroughly enjoyed), had it existed on a premium cable channel. Each episode’s set pieces look incredibly expensive, as it looks like all shots were filmed on location.

Deep State is a family affair. After watching 1.5 seasons of the show, it grows increasingly clearer by the episode. Harry’s incredibly stubborn just like his dad, refusing to let things go, especially refusing to allow the U.S. government to screw him over one more time. But what happens when government secrets are exposed? NO GOOD DEED GOES UNPUNISHED!

Season 1 was tough to digest at times, but Max made the whole process worthwhile. The prequel/sequel/story continuation of already-established characters (and their unexpected revelations) is what makes Season 2 an even more intense experience, having seen the entirety of the first season. There’s the beginning (and possible ending) of various romances between these characters, arms dealers, corporate kidnappings and conspiracy theories that are revealed to be true. There’s a lot to follow in these two seasons, but if there was one theme to be especially mindful when watching: FOLLOW THE MONEY. Because that’s where the truth will lie.

Programming for EPIX has been strong, with television series including the crime-comedy Get Shorty, the spy thriller Berlin Station, the upcoming Perpetual Grace LTD and the excellent docuseries, PUNK. If you don’t receive the EPIX station in your cable or satellite package, you can use the EPIX NOW app for Apple and Android devices to watch the channel’s programs. It’s $5.99/month, but users can get a free seven-day trial. So, there’s no excuse in missing out on this great and gritty series.