Downsizing is No Honey I Shrunk the Kids for Adults 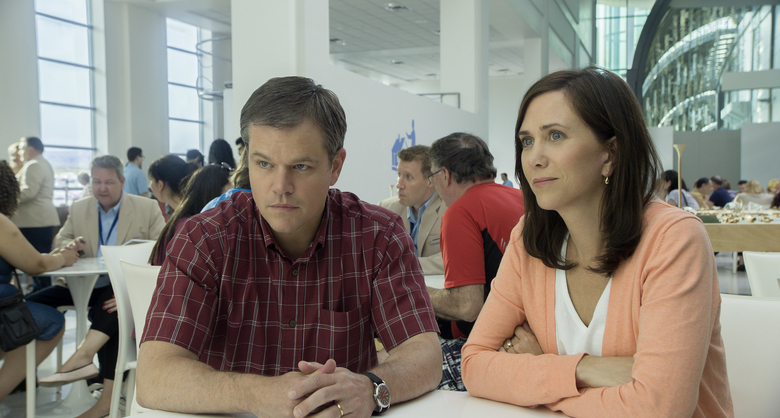 I was pretty interested in seeing the new comedy, Downsizing. The trailers promised a funny, slapstick comedy with a touch of heart and a dash of save the Earth. I was in, despite the fact that I knew the film would be a tad preachy. However, the funny slapstick comedy part was just trailer magic. The film took itself far too seriously and I never quite caught the message it was trying to send.

In the film, Matt Damon plays Paul Safranek, a down-on-his-luck occupational therapist who wishes for grander things. When Norwegian scientists discover a way to shrink people down to about the size of a thumb, Matt is intrigued. After meeting with classmates who jumped at the opportunity, he convinces his wife (through the idea of their money being worth five times what it is as a full-sized couple) to shrink with him. Then, basically, nothing goes as planned. He meets another girl and we find out the world is DOOMED! It’s pretty much one sad situation blossoming into another sad situation. I have problems even reviewing this film, as I have no clue what the goal of director Alexander Payne was. There are tons of cameos in this film and I can only think perhaps they also thought they signed onto a comedy and then were unable to break their contracts.

This film is really just a mess. Characters come and go and are never seen or heard of in the film again. Funny plots and interesting things and ideas are just thrown away. The film never seems to grab ahold of a real, singular idea. Even the visual funny big vs. little gags disappear by the second half of the film. The chaotic plot goes all over the place, as if it was written by someone with attention deficit disorder. This is a would-be hero’s journey, in which everybody is the villain. Damon is pathetic, not sympathetic. My goodness, there really isn’t anything remotely likable about his character. Toward the end of the film, it just becomes hard to watch. All I can say is you probably won’t care that much about any of the characters.

I can only imagine the writers were going for some statement on white privilege? Or maybe it is materialism… or save the Earth? I really have no clue. The film denounces these things while committing an aggression, like having the funniest part of the film be at the expense of the broken English spoken by Ngoc Lan Tran (Hong Chau), a downsized Vietnamese immigrant. While I have no problem with the occasional laugh at a mispronounced word here and there, even I found myself cringing at this.

This film was so bad, I feel pretty safe in saying it is the worst film with a theater release this year. I can just barely get a handle on the spinning storyline and brooding characters to even write a review. I give Downsizing one star. If you feel that you just have to see Matt Damon this Christmas, the film is currently paying and you may check your local listings for times.