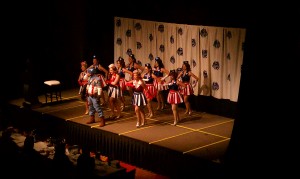 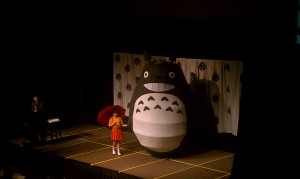 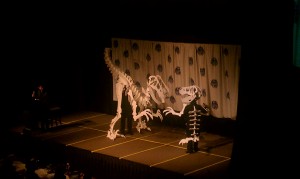 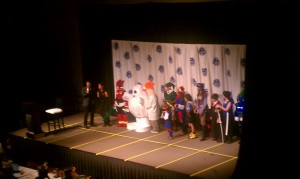 Early evening on Saturday, as the DragonCon Media Room was closing down, I was offered the opportunity to attend the show on the catwalk with the rest of the press corps. You know I was all about it. No hesitation. At the DragonCon Masquerade, there’s an elevated area that overlooks the very-large stage, long enough to house plenty of photographers and reporters. I was one of the lucky few to enjoy the show in such great seats.

But before the fireworks started, I had a mission: I was to escort an Emmy award-winning producer personally backstage, who was filming while everyone was fitting into their costumes and getting any necessary last-second costume repairs. It was quite a rush. And all the entrants were incredibly kind and generous while we trespassed into their territory.

Afterward, we grabbed our seats and the show began. The 2012 DragonCon Masquerade was hosted by MC Grant Imahara (of MythBusters fame), making his second appearance as the Masquerade MC. Grant kept the show going smoothly and offered light-hearted comments and jokes to keep up the positive energy. There is no doubt Grant is a geek… he is one of us. Apparently, he is a former cosplayer and knows his anime, video games and Star Trek (which total a greek trinity). On more than a few occasions, Grant had the crowd in stitches between contestants.

Attendance for DragonCon 2012 was at a near-record (between 52,000 – 55,000), likewise, the Masquerade offered a near-record number of participants as well (39 contestants). Records were broken for tallest singular costume, longest costume, greatest wingspan and also heaviest.

My favorite entry of the Masquerade was the winner of Best Patriotic Skit: “Captain America and USO Dancing Girls.” Not only did Captain America costume look almost as campy in the movie, but the character was surrounded by 10 incredibly attractive women decked out in matching attire… and they had a musical skit to perform, just like in the movie! Singing and Dancing! It was amazing! The crowd roared in approval! It was not a stretch to imagine this group marching along in the DragonCon Parade earlier that day (which they did, and they were a Parade highlight!).