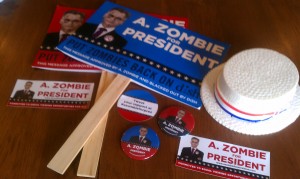 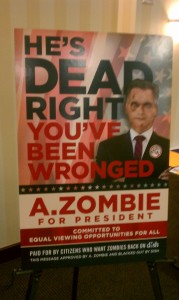 At DragonCon 2012, there were plenty of undead minions lumbering about. But on Friday night — which I affectionately dubbed “Night of the Living Zed” — leading off the weekend’s festivities was the DragonCon downtown Zombie Walk, followed by the Zombie Prom. And for any out-of-touch Atlanta visitors to have entered the lively (or their lack-of) surroundings, surely they must’ve thought the city had gone to hell in a handbasket!

Upon the parade pre-game costume inspection, I managed to get a few fine photos of the zed. And unbeknownst to me, there were a four or five professional make-up artists onhand to touch-up anyone willing to ghoul it up. They were a bit overcome by all the would-be zombies, but all did amazing work.

Another onhand surprise was a political-action-committee lending their local support for a Presidential nominee I wasn’t familiar with (but one who should win over the undead crowd). You may not recognize the name, but come November 6, 2012, you’ll know him well. His name is Any Zombie, and he’s a nominee for President of the United States of America. He’s running on the platform: “Committed to equal viewing opportunities for all. Put zombies back on Dish.”

And for those clueless to pop-culture and current events, all the previous political mumbo jumbo was approved by AMC as a candid promotional effort (also known as guerrilla marketing) of The Walking Dead. It was highly successful. I talked up the Event Coordinator and dished all the AMC dirt, however, there wasn’t too much dirt to be had. The Obvious: Dish Network dropped AMC and its affiliated channels after demanding too much money to the satelite dish provider. And in the aftermath, Dish Network Chairman Charlie Ergen declared, “Our customers are not looking at zombies in New York City. They live on farms and ranches. They’re critically acclaimed but not viewed as much by our audience.”

So, AMC struck back. And the convention crowd is on their side. We side with the Zombies.

And as an awesome recall joke, the actor portraying “Any Zombie” slumbered through the DragonCon Parade the following day (Saturday), accompanied by his still-living wife, all his campaign supporters and one of the most-expensive-looking (but highly effective) promotional items ever, a logo-wrapped touring bus with his likeness on it. Well done, AMC!

Unfortunately, all of this took place around 8:30 pm and I was dead-dog tired (pun intended). The parade was a little late to start and the only thing in the world I wanted was to sit down with an ice-cold microbrew. So, I went home. I hear the 4th Annual Zombie Walk was incredibly succcessful, with many hordes gathered to shamble up and down the streets. And the Zombie Prom was pretty sweet, offering ghoulish beats, declaration of a Prom King and Queen and a photobooth to remember that special zombie in a portrait for years to come. Wish I could’ve made it there.

Friday truly lived up (or is it “died down”) to its billing of “Night of the Living Zed” at DragonCon 2012.