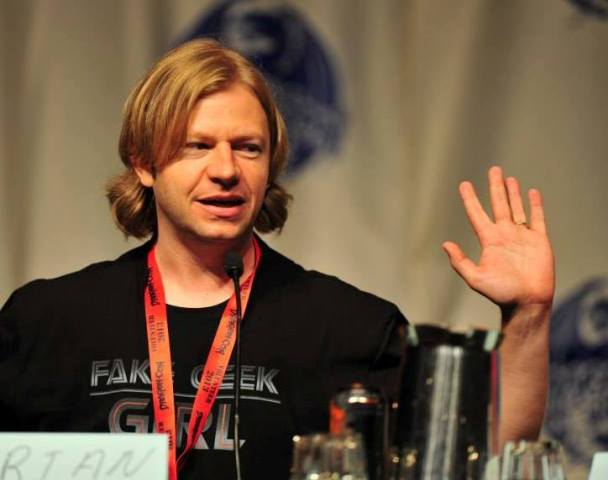 Per Matt
Throughout the years, Dragon Con attendees have enjoyed countless parodies, music videos, celebrity interviews, panel highlights and event commentary via DragonConTV. Whether you’ve watched them before or after panel presentations, via the convention’s host hotels or the highlights posted online, they’re unlike anything you’ve seen before.

Please Describe some of your responsibilities at DragonConTV.
– “I’m responsible for two aspects of Dragon Con: Videography (the official thing) and DragonConTV (the weird funny thing). Videography helps record the con so people can see what they missed or avoid standing in line to see cool things. Our volunteer crew records major events at Dragon Con, interviews guests, creates highlights packages for YouTube and connects the convention’s five host hotels with a private TV network for the duration of the convention. DragonConTV is the not-quite-as-official volunteer crew that creates supposedly hilarious content to entertain fans while they wait for the actual convention to get underway.”

How would you describe DragonConTV to someone who hasn’t experienced it before?
– “Imagine if C-SPAN and Saturday Night Live had a baby, raised it on Kentucky Fried Movie, and let it live in a sci-fi convention’s hotel basement.”

How did you become a staff member at Dragon Con?
– “I initially attended Dragon Con in 1998 (back when we called it Dragon*Con and it was on July 4th weekend). Half-way through the convention, I got recruited by a few friends to help with Technical Operations (TechOps, the convention’s A/V crew). They were desperately short handed that year, so I went from audience member to running sound for The Misfits in a little under eight hours. Turns out I enjoy the behind-the-scenes aspects of a con more than just attending, and quickly became part of the Dragon Con family.” 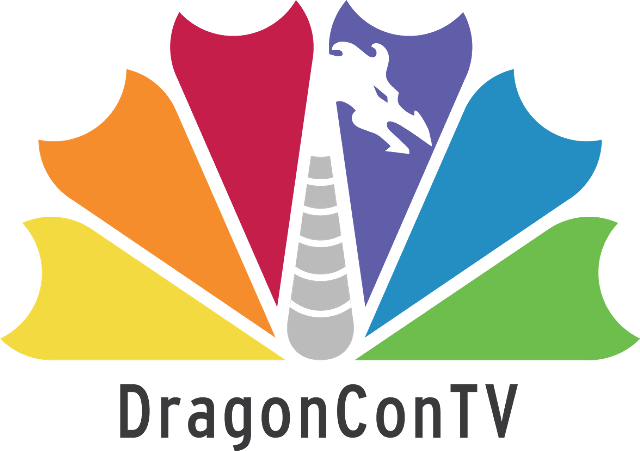 What led you to DragonConTV?
– “We built DragonConTV as an extension of our volunteer work. I did a lot of video production in high school and college, so we added more cameras to the main ballrooms and recruited a few more video nerds. In 2002, two of our volunteers (Patrick & Lucas) wanted to make a guest intro for the Masquerade. Mike and Kevin from MST3K were hosting, and we’re big fans. So, we wrote a script for a parody Star Wars crawl and got it ready before the main event. When the convention director asked us what we were doing next year, we knew were in trouble… or had a great idea. Maybe both.”

“The next year we made still-image ads like you see run before the trailers at movie theaters (well, before Coke and Sony bought all that time). They were all mashups. I also made our first three video spots, the most infamous one being Stormtroopers Gone Wild.”

“That video shaped the core philosophy of what would become DragonConTV. Parody the culture that inspires Dragon Con (sci-fi, fantasy, comics) by mashing it up with the real world. A sitcom about three vampires living in a house, with theme music by Jonathan Coulton. Fried chicken for Cylons. Fragrances for Vulcans. Garrett Wang selling ‘as seen on TV’ merchandise. We started sprinkling those in between convention panels where we have a captive audience… assuming they ran out of things to read, forgot to charge their phones or just got tired of talking to their friends. The crew has changed and grown over the years. Most of the people from the first two years don’t work on DCTV anymore, but their friends do. Now we’ve grown to making music videos, parodying the convention and occasionally educating attendees on proper behavior.”

DragonConTV is unlike anything I’ve seen at other cons.
– “Many conventions stream content or put videos online. What we do is try to connect the convention while it’s in operation, add another way for fans to see the show. I think we’re unique for a few reasons. First of all, Dragon Con is a very fan-driven convention, so it’s easy for a small crew of volunteers to run with an idea like this (within reason). Second, we want to better connect hotels as the convention grows (when I started in 1998 we just had the Hyatt), and using the hotel TV system was a novel way to extend the convention beyond the main ballrooms. Third, I fell into a good crowd of creative people and it created the right mix of talent to build DragonConTV.”

“We’ve actually seen other conventions start their own equivalents to DragonConTV, and a few have actually used some of our content (with permission) which is very cool. Hopefully, they can learn from our mistakes (we’ve made all of them) and do something cool for their fans.”

The videos shown between panels are hilarious. Are they filmed year round or just before the con to stay topical?
– “Thanks, we’re glad someone else shares our twisted sense of humor. We have ideas year round, but typically shoot two to six months before con, then we have a really good idea weeks before con and scramble to get that done as well (guess what I’m doing the next two weekends?). Some of the themes are topical, but we can always exploit classic fandoms that never seem to die. This year, we have a little of both, since Mad Max & Star Wars are new again. We typically have 45-60 minutes of new material each year (bumpers, music videos & skits).”

What are the best locations to watch DragonConTV?
– “We broadcast into the five convention host hotels: Hyatt, Marriott, Hilton, Sheraton and Westin. We’re also adding a second channel this year with ‘classic’ content from the past 10 years of Dragon Con: guest interviews, panel highlights, long-retired DCTV gags and more. It is the best way to see Dragon Con without putting on pants.” 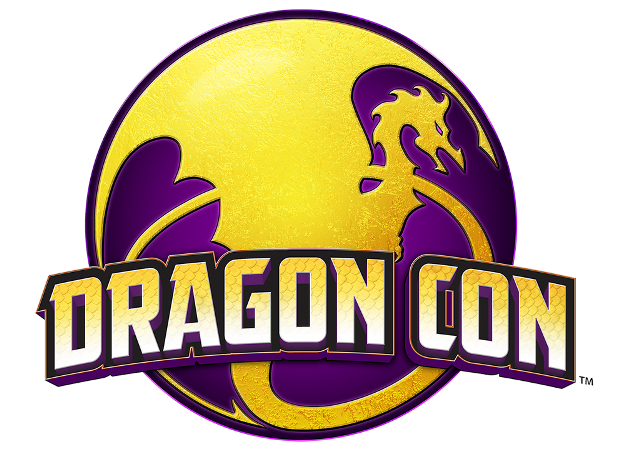 Can DragonConTV been watched online?
– “We don’t stream live during the convention, but our comedy clips and convention highlights get posted to YouTube.

How many people work for DragonConTV?
– “There’s a core of about 20 people that do the bulk of the writing, editing and ‘acting’ (we use that term loosely), plus we get help from fans who bring amazing costumes when we clearly don’t have the budget to buy them. We also get outside contributions from other fans with free time and video cameras. You’re going to see a lot of new faces and helmets in our new Star Wars-themed music video.”

Was DragonConTV inspired by the interstitials of Adult Swim?
– “We started about the same time as Adult Swim, but that was back when they were just anime reruns (not that I’m complaining, they introduced me to Cowboy Bebop). By the time Robot Chicken came along, we had accidentally converged on similar formats. We clearly admit ripping off the bumper format, but they haven’t sued yet (yay). I’ve actually gotten a few compliments from Doc Hammer, but I doubt we’ve had any influence on their programming.”

What are the must-see events you’ll be covering this year?
– “I really love the parade, but there’s a new cosplay event at the aquarium on Saturday that looks pretty exciting. We also have the main panels from the Hyatt Centennial ballroom, and I hope those include cast from Arrow and The Flash. Yeah, I’m a Flarrow fan… still a better love story than Twilight.”

Will you be giving commentary on the Dragon Con Parade this year?
– “Crispy, Ryan and I will be back for the parade. It will be our second year doing it live to the hotel TV network, and my 10th doing the commentary, so you don’t even have to get out of bed to watch. If you sleep through it, it will be posted on YouTube. The 2014 version is there if anybody wants to see what they missed.”

What do you expect to be the trending topics for DragonConTV this year?
– “I can never guess what’s ‘trending’ when we start making comedy. Sometimes we make something like Comic Book Shop that clicks with fans, other times we’re not sure if the meme we’re following will be dead by the time everyone unpacks their kilts. As far as topics from last year, they’re all over the map. Some of them will make it into bumpers, but I can’t give you any hints (spoiler alert: it’s because we’re not done editing). I don’t want to point anyone to comments on our videos, because you should never read the comments. Seriously. If you’re going to troll people, do it with a D20.”

What aspect are you most looking forward to covering on DragonConTV this year?
– “I’m always a fan of the parade and The Masquerade, but I’m eager to get away from main programming this year. Videography is producing more short segments, skipping the big events to show more of the fan experience at Dragon Con. This is something I used to do on the Dragon Con DVDs, and I’m happy to see it coming back. This adds to the guest interviews and silliness we’re already unleashing on the Internet.” 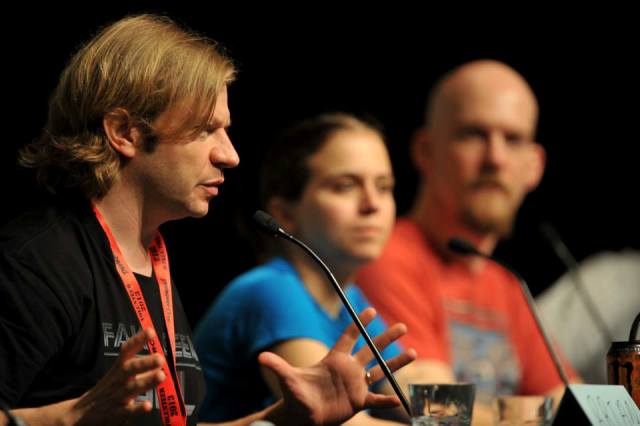 How do you normally spend your time at Dragon Con?
– “This depends a lot on the day. Thursday starts early with setup, when we unpack ‘master control’ and all of our cameras. We have to setup video in all the large ballrooms and have video to all five hotels by dinner time. Thursday is probably the only night I’ll get to bed before midnight. Friday is our first day of programming, and I’m up at 7:00 am to prepare for the first episode of The DragonConTV Late Show. Friday is also the day when our technical gremlins try to run free across the hotel, so some fires need to be put out. Saturday brings the parade, which means I need to be up about 6:00 am to help with setup. This is also one of our busiest programming days, and maybe the day when new volunteers are second guessing their life choices. Sunday is when we’ve pretty much hit our groove and start having fun, which is a shame because we have to pack everything up and head home Monday.”

“On the surface that description makes it sound like I don’t have any fun at con, but I do. It’s a lot of walking, lifting things, debugging electronics and occasionally dealing with unreasonable people… but it’s loads of fun. There’s never a typical day at Dragon Con, which is part of the fun. Yes, it makes it harder to handle logistics, but the volunteers that work with me make sure I’m not doing it alone (which would be impossible).”

Do you ever host panels? If so, will you be hosting any this year?
– “I co-host The DragonConTV Late Show every morning of Dragon Con (9:00-9:30 am), which is like a panel, but much earlier. Ally, Stephen and I wake up the convention, try to help everyone figure out what’s going for the day, and what they might have missed last night. The parade is also like a panel, but it’s outdoors and the audience doesn’t really pay attention to what I’m saying.”

“I used to co-host a live version of my podcast (WhatTheCast?) on the podcasting track, but we retired the show a few years ago. I’m scheduled to present one of the categories at the Parsec Awards this year (both WhatTheCast & DragonConTV have previously won the award). I’m occasionally a guest at other conventions.”

Is there anything else you’d like to add?
– “I’ve been videography director for 10 years now, and it’s been amazing to see how much Dragon Con has grown over that time. It’s weird to think that one small idea (‘lets make a funny video’) has grown into a way to better connect 65,000 fans to the convention experience. Conventions are important to me on a personal level, no matter how much I facilitate making fun of them, and I’m proud of what our volunteers manage to pull off every year.”

“On a more serious note, killing red shirts will never not be funny.”