Expel Your Demons With The Cleanse 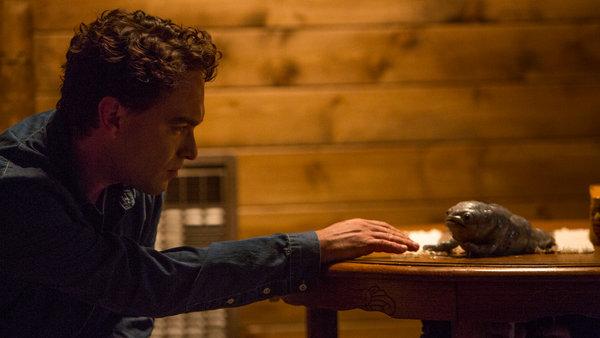 Making light of detox diets and crazy self-help books, The Cleanse is an odd movie with an original story to tell. Director Bobby Miller, who apparently at some point watched 1979’s The Brood and read The Master Cleanse, relies way too much on the idea of his story, without taking us all the places the idea could go.

Paul Berger (Johnny Galecki) is lonely and unemployed. He needs to do something to help initiate change in his life. Paul signs up for a detox program and is whisked to an isolated mountain retreat with three other participants. They are all given a disgusting beverage upon arrival and soon they are experiencing… uh… evacuations, so to speak. Out comes ugly creatures from their bodies that are also strangely cute, like a pet — a really ugly pet. The psychological baggage metaphor is obvious and the guests struggle to rid themselves of their tiny creatures. Creatures that quickly grow and get bigger with each day. IF you, reader, are anything like me, you would be so freaked out, the very first thing you would do would be to kill any kind of disgusting creature that came out of me, while vomiting into a sink. Then I’d immediately check myself into a hospital, as either I am now crazy or infested with parasitic reptiles. Either way, it doesn’t seem like a good thing and I would run, not walk, to medical care. That’s just me, though. Our characters in the film become friends with their creatures and become attached to them.

This attachment to the characters’ growing “demons” reflects how people often maintain dependencies on their problems, using them as a crutch to stay right where they are in life, never moving onto the next “stage.” Nevertheless, Miller doesn’t get too deep into the emotional lives of his characters, a mistake, given the in-your-face metaphor in the film. This film could have been a character-study piece or a Gremlins-esque horror, but for whatever reason, the director is just telling us a fairly unambitious story.

The film is delightfully weird, but after the first half of the film, it’s as if the writer ran out of things to say. There is so much more that could have been done in a movie about literal demons that are cleansed out of your body. The film falls flat at the half-way point and that’s disappointing. The film has a low-level creepiness about it, but never runs with it and goes for full-on freak out. Not to mention the actual cleanse and how it was developed is never mentioned at all, leaving viewers to wonder about how exactly someone realized the things that are mentally holding us back are actual creatures that need to be expelled from our bodies.

The CGI in the film used to depict the actual creatures is really well done and they end up looking quite realistic. The actual setting, lighting and camera work are acceptable, but nothing that will wow viewers. The film uses simple buildings and forest locations that are actually not creepy at all. The sets and lighting do not lend to help amplify emotion or ambiance.

I give the film three stars for an original idea, but bland finish. The Cleanse is available for rent on demand.