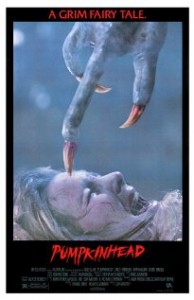 So, here we are, on Halloween, watching a Fear Fest horror film. An entire movie, inspired by a poem? Well, OK.

First some kids tease a young ‘un about the urban legend, Pumpkinhead. Later, said young ‘un meets an untimely demise, and his father, Lance Henriksen, seeks vengeance! Although the summoned demon is deadly, it does not have an actual pumpkin as its head. This part was a bit disappointing, but still a great idea. As it gets revenge, Henriksen has a change of heart… but is it too late? 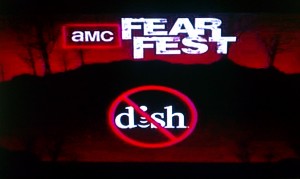 I always wanted to see this movie because it was from the ’80s, starred a young Lance, and featured a magnificent horror creature. This is the youngest I’ve seen Lance Henriksen for a long, long time. Way before his voice turned gravelly and his face severely aged. Henriksen has continually impressed me with his acting ability and choice of strong projects: Aliens, Alien 3, NCIS, Tron: Uprising, The X-Files and my fave, Millennium. But sometimes, he does pick some low-budget horror flicks. I can’t blame him. Overall, he’s still winning in my opinion!

Strength: Young Lance kicks ass!
Weakness: Not a lot of Academy Award material to work with, but fun.
WTF Moment: Back in the ’80s, witches seemed to cast demonic spells all the time!

Notable Quotes:
– “Raising the dead ain’t within my power.”
– “It was an accident…”
– “Nothin’ can call it off… but I’m gonna send it back to wherever the hell it come from.”