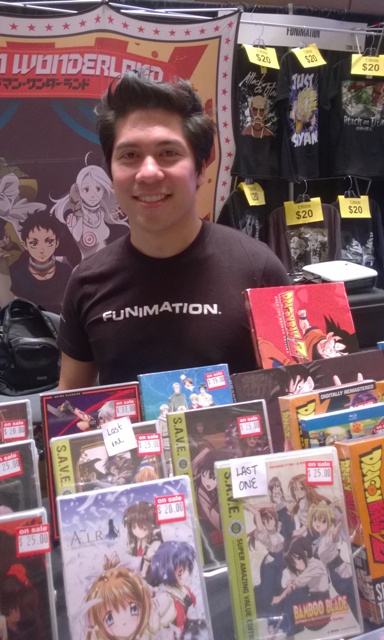 Per Matt
Funimation was incredibly visible in its first appearance at Momocon. In addition to selling merchandise in the Dealers Room, Funimation hosted multiple Attack on Titan panels complete with voice actors, live Tweeted a TV-viewing party that was trending on Twitter and even made a big announcement at the Toonami panel. At the center of it all was Senior Manager of Social Strategy and Development Justin Rojas. Winding down after a very busy weekend, I got a chance for a quick interview. Mr. Rojas discusses the relevance of Attack on Titan to the anime genre, debates continuity theories of Space Dandy and reminisces about reuniting Tom with Dragon Ball Z.

How was your Momocon weekend?
– “It’s been a good weekend. We had a lot of events, actually. It’s an interesting con to be at, since it’s not an anime-specific con. On the business side, it allows me to talk to people that I normally don’t get to talk to, which has been cool. On the sales side, we kind of have a different flow of what is getting purchased, compared to your standard anime-specific con.”

What is the current best-seller for Funimation?
– “Attack on Titan is our big push, right now, sales-wise. We’re doing some pre-sales here, then you would pick it up from FYE, which is our local retailer for this convention. In regards to stuff that has been performing at conventions, Wolf Children had been a big hit, still. It’s been released for a while now — half a year or so, I think. I can’t remember when it first came out. It’s still very popular. Space Battleship Yamato has been an interesting thing, especially at these types of conventions, where you have more of the mass audience and a little bit more of the older animation fans. They are familiar with it either as Star Blazers or Yamato. We have the live-action (Yamato) movie. People will see the trailer for it and be interested. They’ll say, ‘I used to watch this as a kid. I’ve got to have it.'”

What is the overall significance of Attack on Titan to the anime genre?
– “Attack on Titan is a breakthrough title. If I had to compare it to something else we’ve done, it’s kind of like when we got Fullmetal Alchemist. The potential reach that Attack on Titan has versus other anime titles is pretty significant. We’ve been able to see a lot of non-anime fans or fringe-anime fans being pulled into anime, because of Attack on Titan, which is great, because we need to increase the anime-fan base here in the U.S. I think that’s one of those titles doing that, especially with it being on Toonami, getting that additional exposure.”

“Toonami’s here, which is cool. I got to talk with those guys. I actually had an Attack on Titan panel last night, which went off really well with Bryce Papenbrook, the voice of Eren Jaeger and then we followed up that with a watching party, down at the hotel bar, for the Episode 4 premiere on Toonami. That’s always cool, to have all the fans there, watching a live television event with Aaron, there. We’re riffing on each other, because Eren gets beat up a lot in this episode and then we’re doing live Tweeting, posting photos, making it an event. Trending it on Twitter.”

“Attack on Titan is one of those titles that you can build that type of community and event around, because almost everybody likes it.”

How did Toonami manage to get the English-dubbed premiere of Attack on Titan?
– “The English-dub premieres, for us, are very important. With the contract being signed with Toonami for broadcast, that creates an additional opportunity for us to leverage it. We did the premiere at Anime Boston for the very first time anyone saw the English dubs, but that’s a contained event, not nationwide. You could definitely see on social-media world, that it kind of blew things up, for a while. We like working with our partners over at Toonami and Cartoon Network, trying to make stuff like that happen. I think we’ll try to keep doing more things like that.”

Didn’t Space Dandy have its world premiere on Toonami?
– “Yeah. That was pretty crazy. That was the first time, ever, for us and I believe for them, as well. We were actually in Otakon Vegas, when that happened. We did a big Space Dandy event, over there, which coincided with the world premiere of Space Dandy on Toonami. The big deal with that one was it was literally a world premiere. We were showing it, in the U.S. and in English, before Japan saw it in Japanese, which almost never happens. So, that was a really big, historical moment for us in the anime industry and anime, in general. The fact that we were simul-dubbing that one, at the same time they were doing the Japanese version, is kind of a crazy idea. Production deadlines are super tight. You’ve got to work really fast, but it is definitely something that potentially could happen in the future again.”

In your opinion, what makes Space Dandy so popular and unique?
– “Space Dandy is a very interesting title because it comes from the pedigree of the Cowboy Bebop team, Sunrise. They have an awesome team that works on it. That notoriety makes you want to check it out. And then it comes to the characters and the design. It’s very unique; retro but modern. The interesting thing about Space Dandy is that they have separate teams working on each individual episode. So, you’ll get a different animation studio or you’ll get a different music artist… each episode is very unique, in itself.”

“We had a couple of Space Dandy panels in the past and I learned that some of these episodes are being worked on at the same time, by different teams. Sometimes the different teams don’t even know what the other person is doing. That’s why one episode will be so much different from another episode. The series is very self-aware. It knows it’s an anime. Although it’s a comedy, overall, it does have its moments of really emotional ups and downs, within one episode. You start up another episode and it could be completely different. That’s what makes it interesting and why people are attracted to it.”

Would you say Space Dandy, as a series, has no continuity?
– “There’s a different type of continuity with this series. There’s a lot of theories out there that maybe there is continuity, because of how they travel through space and time. Maybe there’s a different, alternate-dimension reality… a parallel universe type of thing. That’s why Dandy and crew can die in an episode and the next episode they’re back. Maybe that’s in a different universe. Maybe it is all in continuity, but we just don’t know the overall explanation, for how that works.”

When is the Season 2 premiere date for Space Dandy?
– “I think it’s in July. I can’t remember off the top of my head. We’re excited for Season 2. It appears on Toonami and luckily, we get to do the distribution for it digitally and we’re going to be working on the home video release for it. I don’t have a date for that, but we’re looking forward to all of that.”

Is This a Zombie? is almost indescribable. How would you describe the overall series?
– “It’s one of those shows that is so crazy and over the top and that makes it really easy to get people interested. It sounds like you’re crazy when you’re describing the show. When I tell people that it’s about a guy — your average student — who becomes a Zombie, who inherits Magical Garment Girl powers, who crossdresses and gets a talking chainsaw that he uses to fight giant squids, they’re like, ‘Are you making this up?’ No. That’s exactly as it happens.”

There was a big Funimation announcement at the Toonami panel. Could you tell me a little about that?
– “Toonami is bringing back Dragon Ball Z… Dragon Ball Z Kai, to be specific. They’ll be showing that on Toonami this Fall. Dragon Ball Z and Toonami have had this long history. As an anime fan in the U.S. who grew up watching Dragon Ball Z on Toonami, that’s a big deal. To see Tom and Dragon Ball Z back together again is pretty interesting. It’s something I think a lot of fans will feel nostalgic about and we hope it does really well. So, encourage everybody to watch it on Toonami and get those ratings up, so they can keep airing that.”

What’s the latest information about the Funimation Website?
– “We’ve been doing a lot of stuff on Funimation.com. We’re really ramping up our streaming service. We’re making a lot of improvements to it and to our Website, which is a big deal for us. We’re making it a source for everything Funimation and all our content. In addition to the streaming, we launched our shop. This is our first year that you can buy stuff online, directly from Funimation. We’re skipping the middleman. We’re fulfilling directly, which means we can do some really interesting package deals.”

What conventions will you be headed to next?
– “I’m going to E3, which will be my first time, so I’m excited. But then we’ve got the slew of summer cons. July’s going to be super busy: Anime Expo, ScrewAttack Gaming, San Japan, then San Diego Comic-Con. So, it’s something every weekend. If I’m alive in August, I’ll let you know and maybe I’ll see you at Otakon.”