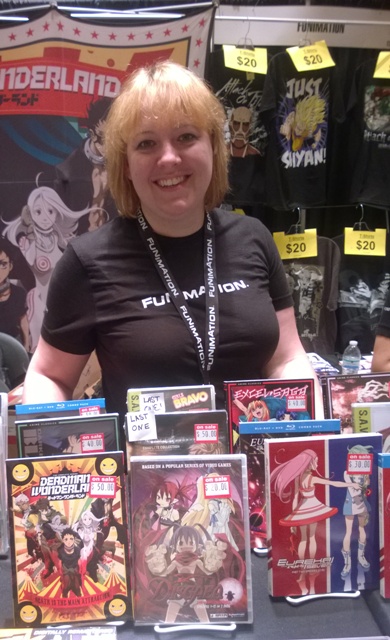 Per Matt
In 2014, Funimation made its very first appearance at Momocon. Conventions Manager Tara McKinney focused on informing the attendees of the multi-genre convention about the variety of titles distributed by Funimation throughout the weekend. In our interview, Ms. McKinney details taking Funimation on the road for the con circuit, hosting peep-show panels as her alter ego and bringing Funimation back to Atlanta later this year with a few surprises.

How long have you been working for Funimation?
– “I have been with Funimation for three years now. I actually started out as an intern with Funimation, through my last year at school. And then right as I was graduating, I got offered a full-time position in the advertising and media department. I’d been doing that for about two years. In late January, early February of this year, I applied for the conventions position and interviewed. I have been doing that since February. Ohayocon was my first solo convention. Otakon Vegas was my first show with Funimation.”

What do you think about the job, so far?
– “It is awesome. It’s really great to get to interact with all the fans and find out what everybody loves and why they love it so much. The other thing that’s really neat is for a fan to love something so much, it makes me want to love it even more. We have over 300 titles. Sometimes it’s too much for any one person. But then, everybody will point out certain shows and I’ll need to go watch them. That’s one of the great things. Just interacting and talking with people… it’s a lot of fun.”

What’s the top Funimation series people are telling you to check out?
– “The one that is the most requested is Wolf Children, but I have seen Wolf Children. It’s a movie. At cons, we get a lot of older title requests. This weekend — Momocon in particular — people have been asking about Case Closed. A lot of people love Heaven’s Lost Property, which is one of my favorites. A lot of the older series, too, like Shuffle!, Love Hina… all sorts of good stuff.”

This is the first appearance of Funimation at Momocon. What do you think about the convention?
– “This weekend has been really good. The fans here are so nice. I love Georgia. It’s really nice to have everybody so hospitable. Everybody’s really nice, really excited to be here and really respectful of each another — which is really, really positive to see. It kind of puts a nice cherry on top of your weekend, when everybody’s nice and everybody’s respecting of each other. Momocon, you’re good people.”

Tell me some of your roles as the Conventions Manager.
– “My degree is in merchandising and digital retailing. I did a double major and I have a ton of convention experience. I have done everything from Guest Relations to Green Room… it’s a little bit of everything. I will talk to a show about (Funimation) showing up. From that point, we’ll get into contracts and negotiations to sign up. Then, it’s a matter of placing an order of product to bring, making sure you have staff for the show, travel arrangements, any panels that we would need to prepare for and trying out new panels.”

What are some of the new panels Funimation has been preparing?
– “There’s a couple of formats that we’re playing around with, that are different. We do a peep-show panel now, which is an 18-plus-late-night panel. It is a lot of fun. Also coming up, for A-Kon in Dallas, we’ve got a Date A Live dating panel. It should be a lot of fun. We’re trying to experiment and do a little bit more and then interacting with everybody in the dealer’s room, giving everybody information, helping them check out new series and stuff like that. If you’re looking for me at a Funimation convention, I will be at the dealer’s room all the time, so you can come by and say, ‘Hi.'”

Have you already given some panels at various conventions?
– “I have. I’ve done industry panels; I’ve done some previews panels. Most of the time, when we have our social-media team, that’s their wheelhouse and that’s what they take care of. Justin Rojas and Michelle Lee are the ones that give the most of our panels. The late-night 18-plus panel is something Michelle and I do together, but we’ll have alter egos. Just to be completely ridiculous, my alter-ego name is Cookie Stratford.”

How does Funimation change its strategy for multi-genre conventions?
– “When we do these conventions that have a multi-genre interest, we try to bring the titles that would appeal to them. So, we bring a lot more titles that have to do with video games, the shows that have been on Toonami, things that kind of across-the-board appeal to more people, whereas sometimes for the anime-centric cons, we’ll bring all the really, really anime titles. Sometimes we’ll tweak our panels. We had a bunch of Attack on Titan stuff this weekend that we focused on, which was great for our attendees and great for us.”

What were some of the best cosplayers you got to see at the Funimation booth?
– “I saw a really fancy LSP from Adventure Time. She was wearing a purple ball gown and had giant purple hair. It was amazing. There was a kid dressed up as Tomoki from Heaven’s Lost Property and he was carrying around a stick with panties on it and he wore panties on his head. I have never seen that before. Impressive.”

Hopefully Funimation will return next year, as well.
– “Next year, it’s in a new location: the Georgia World Congress Center and the Omni Hotel. I know this space feels like, ‘We’re ready to get bigger.’ It should be really cool. I hope so. I hope it works out. Personally, as the Conventions Manager position, I’ll do probably 22 to 24 cons a year, which has me gone about two weekends out of the month. Sometimes, I wish I could clone myself, then I could send myself to more conventions.”

What do prospective conventions need to do to entice Funimation’s presence?
– “Plan early. It’s really good to give us at least six month’s notice. A lot of our schedules get locked up really early. I’m already planning for shows to go to next year. As soon as a convention knows that they might want to have us out for a convention, it’s better to email us right then. You can reach us through the Funimation.com ticket system or you can email. Both of those come directly to me and I’ll answer you pretty quickly.”

What locations does your upcoming schedule include?
– “We will be at Project: A-kon in Dallas, Texas and then we have three weeks off — which is unheard of. But then starts the summer-busy season. The first weekend of July we have Anime Expo in LA and following that we have ScrewAttack Gaming in Dallas and the weekend after that we have San Japan in San Antonio and then San Diego Comic-Con. That wraps up July. Three or four more in August, two or three more in September, two in October and one in November.”