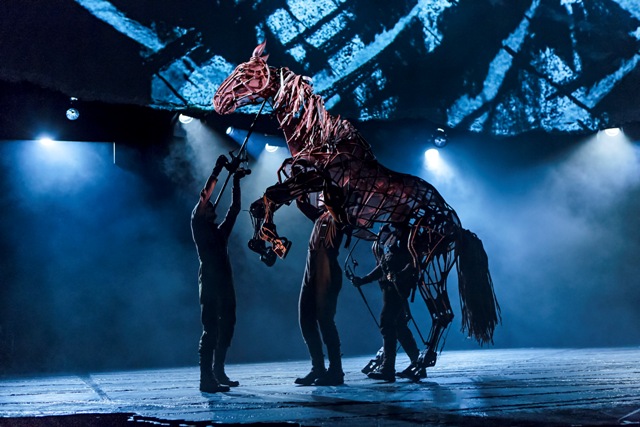 Per Matt
If it’s possible to attribute an Unknown poet’s quote and relate it to a play, this one is spot-on: “A horse is like a best friend. They’re always there to nuzzle you and make your life a better place.”

War Horse tells the tale of a boy, Albert Narracott, and the love he shares with his pet horse, Joey. Based on Michael Morpurgo’s novel, (which was the inspiration of the Steven Spielberg Oscar-nominated movie), War Horse is a winner of five Tony Awards (including the 2011 Tony Award for Best Play), now appearing at the Tennessee Performing Arts Center from June 3rd to June 8th.

When Arthur Narracott brings home a thoroughbred horse instead of paying off the farm’s mortgage, the family’s well-being is threatened unless young Albert can train the wild beast. Against all odds, Joey’s wild nature is temporarily tamed, as it helps the family pay off the mortgage. When news of World War I arrives to their small town, Albert’s father secretly drafts the horse into military service and Albert is crushed, having bonded with his pet. Eventually, Albert runs away from home and enlists with the English Army and hopes to chase down his pet, even though he is underage.

The storyline then follows the horse, crossing battle lines multiple times, as it tries to find its owner, who is simultaneously hunting for his beloved pet. The play displays the brutality of World War I and ultimately, it’s a tale of loyalty, friendship and courage.

Michael Wyatt Cox is great as Albert Narracott and Director Bijan Sheibani keeps the epic play tugging at emotions, which at times can be emotionally draining. Thankfully, there are quite a few funny lines of dialogue to keep portions of the show lighthearted.

The true stars of this production are the many faceless people of the Handspring Puppet Company, who incredibly bring life-sized puppets to life onstage. At three puppeteers per horse, they practically become the animal (being responsible for the creature’s intricate movements as well as sound effects). Their attention to detail is incredibly believable, so realistic I was looking for a PETA statement listing “No actual animals were hurt during the making of this performance.”

War Horse is not a musical; being similar to the movie, it is not an exact replica. It’s heartbreaking to see the boy and his beloved pet apart, often evoking childhood emotions. The story really resonated, often reminding me of all my current and past pets. The limited special effects — including an animated landscape that reminded me of an old-school film projector — are incredibly effective. They’re even movie worthy.

Make sure to arrive early and check out the TPAC-Tennessee State Museum exhibit exhibit on the G Level (directly below the main Jackson Lobby) to discover artifacts, photographs, art and video detailing Tennessee’s role in World War I and a panel on the military history of horses before the show begins.