Futurama: A Tale of Two Santas 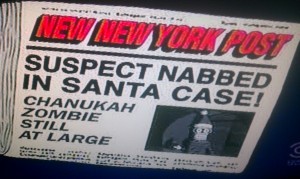 The crew visits Santa’s lair at the North Pole of Neptune for a delivery and unknowingly freeze the evil robot in ice, leading Bender to taking over Santa’s duties. But instead of spreading terror and mischief, he actually delivers toys to an unsuspecting public. And no good deed goes unpunished. In the end, both Bender and Robot Santa spread the holiday spirit far and wide… with mixed results.

Robot Santa’s back! Everyone Rejoice! Christmas needs a bad guy, and he’s one of our faves. Odenkirk and Hughghart really created an excellent episode, building on the introduction of Robot Santa from the episode, Xmas Story, and actually surpassing the original. Kudos, Gentlemen! Huzzah!

And this time, in the second very-special holiday Futurama episode, we’re introduced to Kwanzaabot and hear about Chanukah Zombie! I can’t wait to find out more of this character! Futurama needs more zombies!

Strength: The introduction of Kwanzaabot! Possible future Chanukah Zombie character!
Weakness: Robot Santa, for the second time, gets too few lines of dialog.
WTF Moment: John Goodman was unavailable to play the role of Robot Santa, so John DiMaggio replaced him. Maurice LaMarche also replaced Dan Castellaneta as Robot Devil. The replacements were OK, but not great.