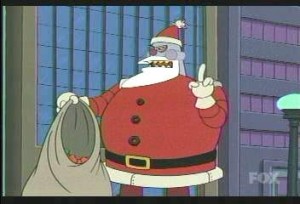 “Back in 2801, the Friendly Robot Company built a robotic Santa to determine who’d been naughty and who’d been nice and distribute presents accordingly. But something went wrong.”

We love Matt Groening’s creations. The Simpsons are wonderful. Life in Hell is funny. But Futurama is amazing! Who’da thunk, all it took to create a memorable seasonal episode was to turn Santa Claus into a violent, destructive 8-foot robot, haunting people on Christmas Eve in the year 3000. Xmas Story originally aired in 1999. It was the first of the Futurama Christmas-themed episodes, and the first to feature Santa Claus as an evil character.

Leela and Fry are lonely during the holiday season and are eventually brought closer to each other when Santa makes his grand entrance at the 19-minute mark, attempting to chase them to their doom. While he gets less than 10 minutes of facetime, future episodes pair him up with other equally evil entities.

Monsters make Christmastime memorable. And Futurama definitely highlights lots of monsters and evil creatures. I look forward to reviewing future episodes of Futurama. I’ve been a fan since the pilot episode aired on FOX.

And for more info, check out Can’t Get Enough Futurama. Google it. Been a fan of them for a long, long time… even before Futurama was originally cancelled. Tell ’em I sent ya.

The Charlie Brown satire was classic and this episode sets up the future evil-robot evolution, yet to come.

Strength: Evil Robo Santa is introduced!
Weakness: Leela still thinks she’s the last of her species (later retconned as a mutant).
WTF Moment: Bender finds all the food to cook for his crewmates in the streets.

Noteworthy Quotes:
– “If he catches you after dark, he’ll chop off your head and stuff your neck full of toys from his sack of horrors.”
– “Christmas. You know, Xmas.”
– “Gone the way of the poodle… and your primitive notions of modesty.”
– “Santa has something very special in his sack for you two.”
– “I’m going to shove coal so far up your stocking, you’ll be coughing up diamonds.”
– “Your mistletoe is no match for my TOW missle.”