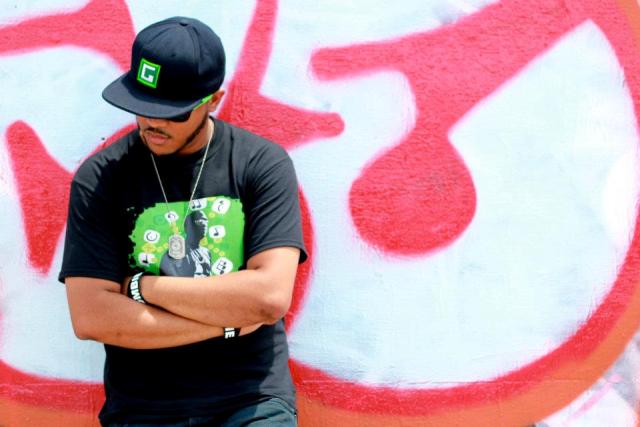 Per Matt
During San Diego Comic-Con, I ran into Game-hop entertainer, Godric Johnson at Gam3rcon. Although I missed his video game-rap performance and panels at the convention, I checked out his CD and liked what I heard. Godric discusses working in the video game industry, performing at conventions and working at the independent studio, Jetstreame.

You coined the term, Game-hop. Could you explain it?
– “Game-hop, first and foremost, is my BRAND. It’s my style, persona and a TERM I coined. It’s a perfect fusion sub-genre of its Father, Game Industry and Mother, Hip-hop. The little brother of Nerdcore. Game-hop songs are developed in dual layers. I usually craft half the song as game related and the other half is traditional hip-hop. It’s very nerdy/geeky, yet at the same time, it’s very serious. You can’t take everything at face value. It requires multiple listens. Songs convey saving life, character integrity, spiritual melancholy, circumstances and faith. I’ve been doing Game-hop for about five years, now. I studied game design and digital art in college, so I’m an Artist/Game Designer.”

How would you define Nerdcore Rap?
– “Nerdcore Rap is a sub genre of Hip-hop music that focuses on nerd/geek culture. The term was coined by MC Frontalot. Other great Nerdcore artists, such as MC Chris, MC Lars, Optimus Rhyme and a guy who doesn’t really get the credit for it, but he’s a founding father… Del the The Funky Homosapien. His song, Proto Culture, is pretty much a major geek anthem of gaming. When Del was rapping about nerdy stuff, no one labeled it ‘Nerdcore’ at the time. Geek Rock is a brother of Nerdcore and is pioneered by great veteran bands like The Minibosses, The Megas, PowerGlove and The OneUps. Nerdcore covers the whole gamut, from everything to technology, science, video games, comic books, sci-fi, anime, etc. Anything pertaining to nerd culture/geekdom. Nerdlore galore.”

How do you fit into that genre?
– “I classify myself as new school and I believe Game-hop is an expansion pack, if you will, to its older sibling, Nerdcore.”

Was there one moment when you decided you could combine rapping with video game
references?
– “It was one particular memory that sticks out, I remember it like it was yesterday. It was when I coined my term Game-hop back in ’06. A few of my friends were over at my house when I lived in Tempe, AZ, playing Super Mario World. They were on the level-select screen in Vanilla Dome. I just started freestyling over the level-select song, since it’s very hip-hoppy, to begin with. I was freestyling about what everyone was doing at the time, about life. Throwing Mario and Luigi in the mix, then it hit me. This isn’t just hip-hop, no, this is GAME-HOP! BOOM. And there it was, so I ran with it.”

How did you initially get into the music business?
– “Well when I was in college, I used to write rhymes here and there, over popular mainstream hip-hop tracks. I had a roommate who freestyled, he was very very good. I was decent at writing lyrics, so we’d bounce ideas off one another. It was just a hobby I had, I loved doing it. Friends would hear it and would be like, ‘Why aren’t you making music? You write really awesome inspiring lyrics.’ It wasn’t until 2003, when I started at UAT (The University of Advancing Technology), where I met my good friend and super-awesome producer Matt James AKA ‘Ultimatik’ that I started recording material on wax, in an actual studio. I met him in my directing class and he said we should jam out together. So, we did. I recorded a couple of cuts, back in the day, but I still wasn’t serious back then. It was still just a hobby. I was focused on finishing school. I didn’t get really serious with music until AFTER college, when I coined my term ‘Game-hop’ in ’06.”

Who are some of your musical influences?
– “That’s easy. The iconic legend himself, Jimi Hendrix. He’s my favorite rock artist of all time, and arguably the greatest guitarist of all time. I really look up to him, he’s too BEAST. It’s quite unfortunate I didn’t get to meet him, since he passed before my time. I did meet a couple of his talented family members, though! In terms of hip-hop I have three favorite emcees, I dub it the TRI-FORCE of emcees that I really admire and respect: Andre 3K, The Mighty Mos Def (or Yasiin Bey) and Lupe Fiasco. All three are supremely talented artists in their own right. 3K’s flow and storytelling are always off the charts. He’s regarded as one of the greatest emcees of all time, to pickup a mic. Mos Def’s passion, style and overall aura he creates in his music is just amazing. Lupe Fiasco is such a dynamic lyricist. His songs require multiple listens to get the true meaning behind his content, and even then, sometimes people just don’t get it. I know lots of people don’t really listen to Lu because they don’t want to THINK when they’re listening to music. I guess that’s cool and all, but I believe in SUBSTANCE over IGNORANCE any day of the week. 24/7, 365.”

Have you previously worked in the video game industry?
– “Indeed I have. I used to work for a game company called Artificial Life, back in 2009. I worked on Linkin Park’s first mobile game, called 8-Bit Rebellion. I did concept art and game design. It was a great experience, but unfortunately I was let go before the game’s release. It was too bad, because I didn’t get to meet the band when they had their launch party, for the game. I’ve also done freelance character artwork and design, here and there.”

Could you tell me a little about Jetstreame?
– “Jetstreame is a small, independent game studio developing mobile and social game content for the iOS, Android, Blackberry, Windows8 and Facebook platforms. We’re a team composed of about 15 members (game designers, artists, programmers, marketing). We’re currently in development of our Wave 1 campaign of games: Circuit Swap (which is already live on Android and Blackberry), Crush Hour, Dragon Drop, Star Shapers and Train Hopper.” 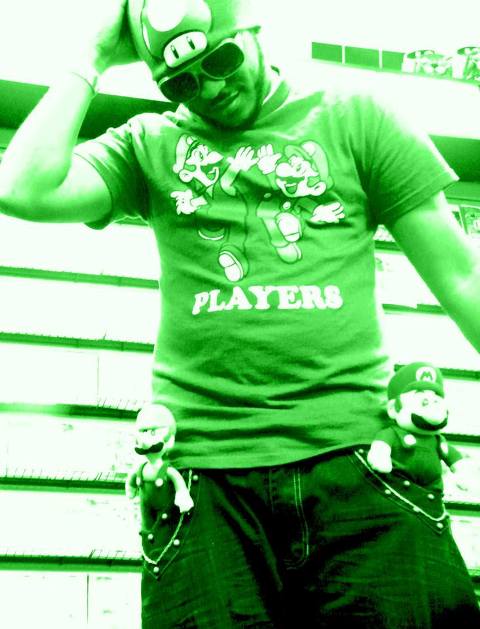 Have you presented a panel at past conventions, discussing Jetstreame?
– “I hosted my first game-studio panel during Game-hop Aftercon Convention (GAC) in 2010. I was also a panelist with Chocolate Covered Cosplay at Gam3rcon, this year. The panel was Diversity in Gaming and we discussed various topics and issues within gaming/cosplay culture. I also gave an overview of Jetstreame: who we are and what we do.”

You recently performed at Gam3rcon during San Diego Comic-Con. Was this your first time to perform there?
– “Yes. It was my first time performing there. I simply loved it. I had a blast. Shoutouts and much love to Brian Bielawski, Mr. Benja and the rest of the Gam3rcon staff, for having me there! Special shoutouts to the lovely Ashphord Jacoway for referring me, too! I love small cons, such as Gam3rcon, because they’re very intimate, so indie, the aura just exudes FUN. That’s the best way I can quantify the feeling. I really look forward to returning next year with my band, Live Avenue, if they’ll have me and of course, Lord willing, I’m still here.”

What was your highlight of Gam3rcon 2013?
– “Wow there were so many highlights. I thoroughly enjoyed the con, from the gaming, panels, art gallery, rooftop party and comedy night, it’s hard to choose. I’d say it was a three-way tie between the panels, plays and night-life performances.”

Do you regularly perform at conventions?
– “I usually perform at my own annual mini-con Game-Hop Aftercon Convention. I’ve been hosting that con since 2008 at my alma mater, UAT, in Tempe, AZ. It’s free admission and it’s a collaborative effort between Game-hop and Aftercon. Aftercon is a social media website dedicated to uniting cosplayers, anime fans and frequent con-goers, to keep in contact AFTER cons. Get it? Pretty clever, if I do say so myself. I’ve unofficially performed at the GAC twice, once this year and once back in 2011. The next event i’m performing at is DigiFest South in Sept 20-21. I’ll be performing with my cousin N.Y.T.E. and two of my producers (Prime8 Pimpin and AF THE NAYSAYER). The show will be streamed on my Livestream Game-hop channel. I’m also planning on performing at many more bigger conferences and conventions in 2014, for sure! More news on that coming SOON…” 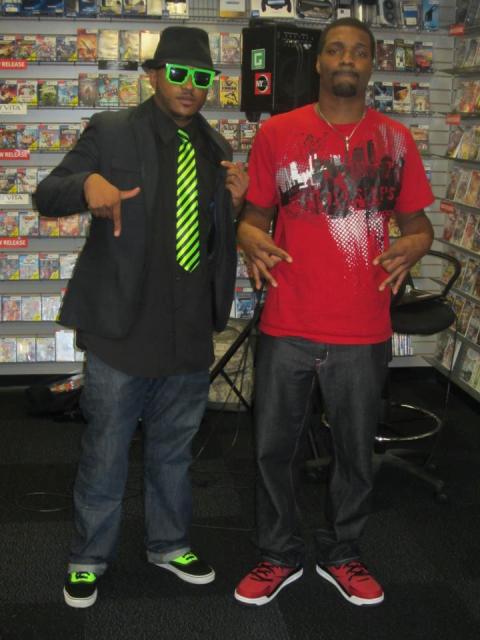 What was your first videogame experience?
– “I was about 5 years old, my older brother bought me an NES for Christmas back in ’87. Around that same time, I also used to go to my older cousin’s house and play his Atari. So, I’d say Jumpman/Mario. I played Super Mario Bros, Donkey Kong and of course, Pac-Man. The plumbers were my first game experience on both NES and Atari. I even referenced it in one of my songs, Player 1. ‘Started on Pac-man then went Jumpman lately,’ referring to both Mario and Micheal Jordan, my ultimate love for video games and basketball, my favorite sport ever.”

What’s your all-time favorite video game?
– “There are way too many to choose from that I really can’t pinpoint a favorite game of all time, per say. However, what I can do is list my favorite genres and game series: Fighting games, Action RPGs and Classic RPGs are my favorite genres to play. Street Fighter III: Third Strike is my favorite fighting game of all time. My lovely waifu, Elena, is in there. She’s my main, and I’m really ecstatic she’s finally making the jump to Ultra Super Street Fighter IV! Tekken is my favorite 3D fighting game series. Christie from Tekken is also my lovely waifu (I don’t know, it’s something about those capoeira girls! Lol) Honorable mention to the Guilty Gear series as well, those games ROCK! That series boasts one of the most balanced fighting game system ever made in my honest opinion. Final Fantasy is my favorite RPG series.”