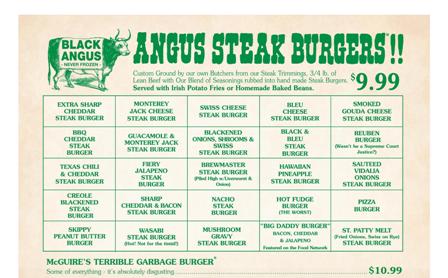 Per Matt
What happens when you combine a half-starved convention attendee with an ominous burger that combines portions of every sandwich in the restaurant?

You have the makings of a very full stomach!

While attending the Pensacola Para Con, I reached out to some locals to find a great microbrewery. I was emphatically told to visit McGuire’s Irish Pub and Brewery! While awaiting our seats, the Bev Nerd crew (Jason Coleman, Twitterless Andrew and myself) decided to sample some adult beverages. Their Irish Stout is absolutely amazing! I was told their Irish Red Ale was very good, as well.

The restaurant boasts of having more than one million signed dollar bills decorating the walls of Pensacola’s Old Firehouse of 1927. Designed as a New York Irish Saloon, McGuire’s sits 615 hungry people.

After a couple of beers, Twitterless Andrew challenged me to a round of Irish Car Bombs. I responded with another round and declared the draw, since both of us spilled a portion of our drinks. By the time our seats were ready, we were informed by our newfound roller derby friends, that visiting celebrities from the Pensacola Para Con were on their way and we would be joining them in the VIP room. By the time they arrived, I was completely starved. 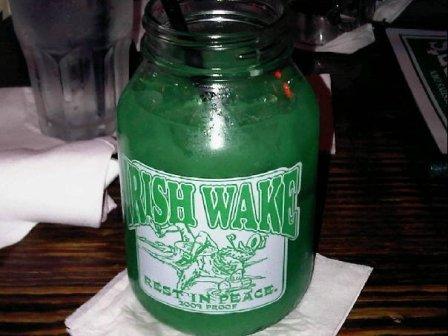 Entering the VIP room, we realize our tablemates are paranormal investigators from Deep South Paranormal, Ghost Hunter/actor Scott Tepperman and Jim O’Rear and the Emerald Coast Roller Derby girls. Another actor, Jason Faunt, of Power Rangers, was supposed to join us as well, but he never made it past the bar.

One glance at the menu, and I knew I had to tempt fate with McGuire’s Terrible Garbage Burger. It boasts of adding “some of everything” and being “absolutely disgusting.” From the menu, you can tell it contains portions of 25 different burgers, combined into one! That’s one crazy burger! 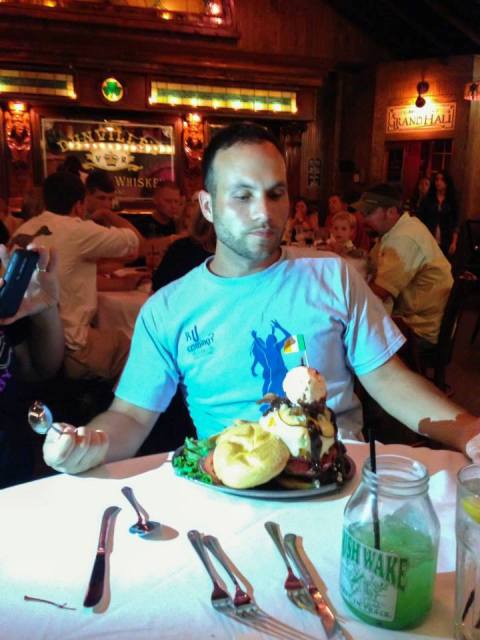 I managed to drink an Irish Wake before the monstrosity arrived onto my plate. Everyone from the table took notice. Many took pictures. You can see I’m contemplating how to dive into this dish.

I’ve attempted many food challenges in the past, those featured from Man Vs. Food to others from the Food Network. Sadly, I’ve failed them all (but enjoyed every second of it). 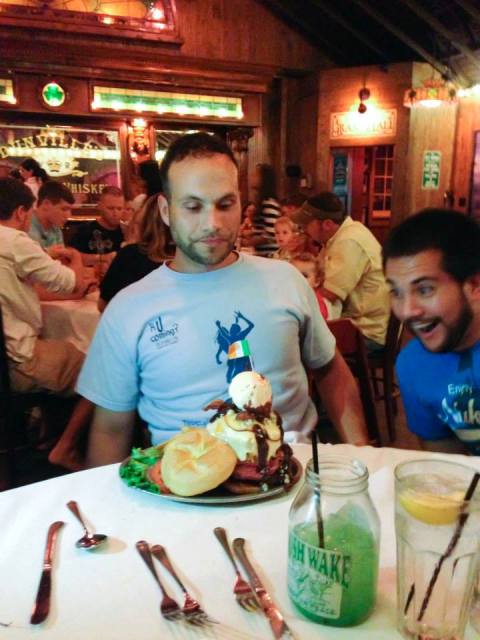 The Garbage Burger is such a big deal, everyone gawked and started the impromptu photo-op, including the Deep South Paranormal crew and Emerald Coast Roller Derby Girls, as well. 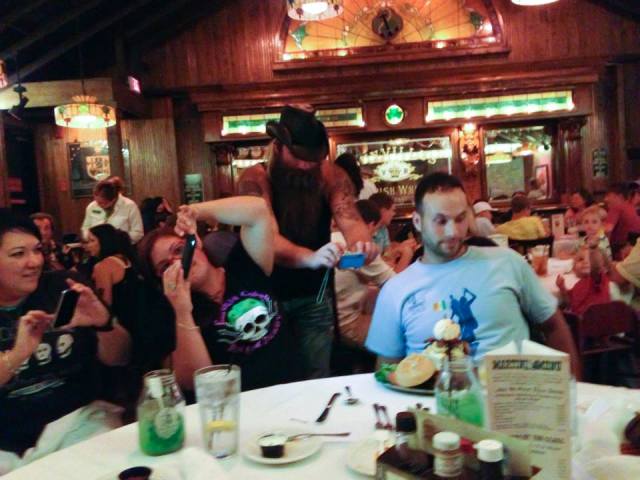 By the time I arrived at the main course — the burger — I was absolutely filled. Sadly, I only ate one-third of the burger. By that time, I was already wiped out. In fact, from my previous food challenges, I learned to inhale the food and digest it later. With this in mind, I ate quickly (even though there was no time limit). Because of this, my shirt was eventually covered in chocolate sauce (which drenched the entire plate). 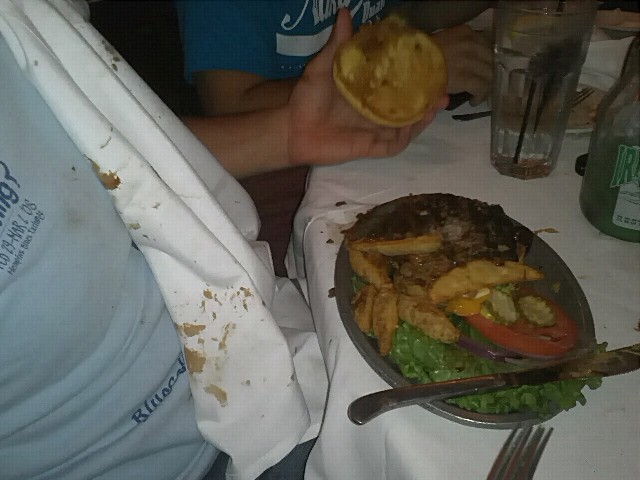 After washing up, I returned to the table and eventually rolled out the door. I may not have completed the meal, but I ate 95 percent of the entire burger. If ever in town again, I’d do it again… but next time, I’d cut back on the pre-meal alcohol!