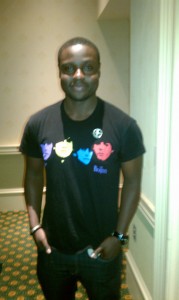 Recently, at the Geek Media Expo Vol. 4, Dayo Okeniyi was a featured guest. He is an actor who played the role of Thresh in The Hunger Games. Dayo spoke with Zombies in My Blog about filming Down South, gourmet restaurants in Asheville, Justin Timberlake, spooking castmembers, and his possible role in the Zombie Apocalypse.

Dayo was born in West Africa, raised in Lagos, Nigeria and moved to the United States around 2003. He lived in Indiana and Atlanta before moving to Los Angeles and becoming a struggling actor.

“I had a matress, in an apartment. That was it.”

He acted in two independent films and attended every casting workshop he could find. While studying with actor Jeffrey Tambor (Arrested Development) in Santa Monica, he was recommended to attend a free class, given by a casting director. Dayo prepared a monologue.

“I didn’t sleep for two days. I knew that monologue like the back of my hand.”

After giving the monologue, he got representation, and the first audition he received was for The Hunger Games. Director Gary Ross liked it, and next thing he knew he was flying to North Carolina to film the movie.

“A month ago, I was sleeping on a mattress in my bare apartment, in Venice, California. And now I’m rehearsing a scene with Jennifer Lawrence and Gary Ross. It was bizarre.”

Had you heard about The Hunger Games, before you were approached to be in the movie?
– “All I knew about the project was it’s a book that’s going to be made into a movie. And I was tracking the casting, like everybody else. I’d seen Winter’s Bone, the year before, so it was a no-brainer to me. This is not because I’m in the movie, but I really loved all the choices (of actors). When Jennifer (Lawrence) was cast, I was like, ‘Of course.’ When Josh (Hutcherson) was cast, I was like, ‘Of course.’ It would make perfect sense to me, but I never thought that I would be in that role, at all. I made the association, but when I knew I was going to read for the role (of Thresh) — immediately, when I got off the phone — I signed the Non Disclosure, got the sides, and bought the books, that day. I read them all before my audition.”

What was it like to work with Director Gary Ross?
– “It was a great experience. It was the best three months of my life. It felt like an indie movie. Gary Ross has a very cinema-verite style of filmmaking. It’s a beautiful way of making a movie. For the most part, it felt like a cool, little play, from high school, that Gary Ross was filming. I loved it.”

Having already read the books, was there any pressure to get the scenes right, the first time?
– “Gary never wanted to put too much pressure on any scene. He would approach every scene… his cadence was absolutely the same. When you’re filming with kids — especially with young professionals — if the tension on the set is really high, they won’t perform. They won’t feel up to the task. He kept it very much like a play: Just go out there and have fun. Do it differently. And it really brought out performances we didn’t know we had.”

Can you tell us a little about working on the Blu-ray/DVD special features?
– “I’m a special features junkie. I have DVDs I have never watched the movies on. All I watch are the special features, over and over again. Before I moved out to LA and wanted to be an actor, I would watch those special features and be so captivated. I just wanted to be on the movie set so badly. I was in love with the process. To watch (The Hunger Games) and to be in it, it’s almost like a full circle. It’s a dream come true. For those of you who love the books, you’ll get to see how the filmmakers make their choices, and really connect with us, the actors, as people. Really, we’re fans that were chosen to make this film. We want to share this experience. The Tribute Diaries was our idea. We want people to feel like they were a part of us, while we’re making the film.” 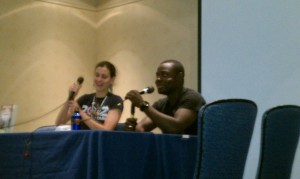 What conventions have you attended this year?
– “I did Collectormania and San Diego Comic-Con… The thing about those conventions, there’s all these lawyers and the studios are hanging around. Everyone is tightlipped. That’s why I love GMX. The fan/talent relationship is genuine. I did archery earlier today. I got to learn how to shoot a bow and arrow and meet the fans. Really have a conversation, and talk to them. As opposed to other conventions, where you’re plugging a product, or go see our movie, and signing five million autographs and there isn’t a real, one-on-one situation.”

Did you challenge Jennifer Lawrence to an archery competition?
– “No, no, no. She was training with an Olympic expert. She was way ahead of the rest of us.”

Did you consider using a bow an arrow for your weapon?
– “In the book, Suzanne Collins is very specific on what weapons the kids use. So, we trained with everything. When we got to North Carolina, they locked us in a room, and there was a long table with a bunch of weapons. We got to choose what weapon we felt our tribute would use in the arena. It was like a kid in a candystore. No two tributes picked the same weapon. It’s amazing to know all the tributes were so in tune with their characters that they knew exactly the weapon their character would use.”

While filming, did you get close to anyone on set?
– “Everyone. I still talk to everyone. I talk to Jen (Lawrence) and Josh (Hutcherson). I’m actually going to visit them real soon. Josh (Hutcherson), Jennifer (Lawrence), Alexander (Ludwig), Liam (Hemsworth)… I’m still close with everyone. Movies like The Hunger Games come once in a while. They’re very rare. When you’re a part of that, you become family.”

What are some of your upcoming projects?
– “Prarie Dogs was a show that’s no longer going forward, due to ABC complications. It was a show, with Kal Penn and Cary Elwes. The Spectacular Now is an awesome movie, based on a book, written by Tim Tharp. It stars myself, Miles Teller (Project X) and Shailene Woodley (The Secret Life of the American Teenager). It’s an awesome coming-of-age movie. I think you guys will dig it a lot. I also did this movie called Runner Runner, with Justin Timberlake and Ben Affleck. It also comes out next year. It’s about the secret world of high-stakes online gaming. It’s like Ocean’s Eleven… but in cyberspace.”

The Hunger Games sequel, Catching Fire, is currently filming in Atlanta. Any chance you’ll swing by the set, check things out?
– “I am definitely planning to go and visit Josh (Hutcherson) and Jennifer (Lawrence) in Atlanta. I’m a geek. To be able to have some kind of ‘in,’ is amazing! Of course, I’m going to check it out. I just wrapped this last movie, Cavemen, and I’m free for the rest of the year.” 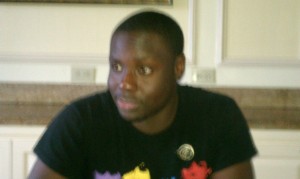 Have you seen any good horror films, lately?
– “I’ll tell you a funny story about myself and Jack Quaid. There was a day when we both weren’t working, and we decided to watch Insidious. That movie haunted us for the rest of the shoot. It’s the most disturbing movie, ever. And we got everyone on set to watch that movie. We’ve been singing ‘Tiptoe Through the Tulips’ ever since. It’s the haunting thing, really. I love The Walking Dead. I’m a sucker for zombie movies. I have serious conversations about fast zombies vs. slow zombies. You know, 28 Weeks Later vs. The Oldies. It’s serious business, OK? I take my zombies seriously.”

We’re pulling for your to make an appearance on The Walking Dead.
– “Absolutely. I would love to.”